Going against the grain is never easy, particularly when it comes to investing. But if you don’t take the risk of moving out of the crowd and taking a different path, you can’t really stand out. Since its inception, Templeton Global Equity Group has focused on bottom-up value investing, which often puts it at odds with the broader market consensus. Cindy Sweeting, director of portfolio management, Templeton Global Equity Group, goes back in history to describe how the strategy has persevered through different market cycles, and why the Templeton team has been going against the grain by investing in Europe at a time when other investors had lost faith.

The Templeton investment approach was born at a time of great turmoil. In 1939, with the onset of World War II, Sir John Templeton bought $100 worth of every New York Stock Exchange-listed stock that was trading under $1 per share. There were 104 names, and 37 were already in bankruptcy. In doing so, he went against the consensus of the time, convinced in his belief that the stocks would recover. Three years later, 100 out of the 104 names were generating a profit. 1

He had taken the first steps toward building what became the long-term Templeton philosophy, when those undervalued stocks bought at a time of deep pessimism later paid handsome rewards.

The Value in Being Contrarian

We still follow the philosophy and approach of the late Sir John, and we believe it has served us well over the years. The Templeton approach to investing has gone through many market cycles. Even though we are value-oriented, bottom-up stock pickers, we need to have some sense of a macro framework to set the stage for the valuation of individual businesses.

Our approach is to recognize that stock prices, over time, follow earnings generation, cash flow generation and the growth of asset value of individual businesses. We approach the world as business analysts, understanding industries and then picking companies within those industries that we deem to be bargains, i.e., significantly undervalued in relation to their earnings, cash flow and asset value generation.

Sir John Templeton would say that the only way to truly get a bargain is, in some sense, to go against the grain of what other investors are doing. That said, going against the grain is never easy. Everyone wants to get a bargain. But the emotional makeup of investors in the financial markets renders this concept difficult. You tend to mistrust that you may be getting a bargain when you’re looking at stocks that have traded off from highs. You feel more comfort when prices are rising because you see others are buying, too.

Value isn’t just being contrarian. Being contrarian doesn’t just mean buying what other investors are selling. Your research has to indicate that the issues short-term investors are worried about are transitory in nature, that they are fixable. It’s considered a buying of unwarranted pessimism. And on the other side, it’s the willingness to walk away from collective optimism, where your research indicates prices have gotten way too ahead of the fundamentals.

Sir John, founder of the Templeton organization, certainly practiced what he preached. He was one of the first international investors to enter Japan in the 1970s. By the mid-1980s, Templeton’s sell discipline indicated that bargains in Japan were becoming scarce. We started selling stocks that had done well and taking profits, even as the market kept rising. By the end of 1989, when Japan made up almost 40% of the MSCI World Index 2, our exposure to Japan was minimal, as we just didn’t see any value there.
[perfect_quotes id=”2668″]

That move set us up in good stead when, ultimately, the very overvalued Japanese market retreated in a correction that lasted for some time. But the fact is that when you have the conviction to exit early, to go against the crowd, you may at times have to suffer the pain of underperformance. This is not easy to explain to investors or to the media. Articles appeared in the press back then suggesting that the legendary Sir John Templeton had lost his touch. This response highlights just how the Templeton culture of positioning early for the next potential market recovery can run against popular opinion.

Similarly, if you look at the late 1990s, leading into 2000, our bottom-up research began to indicate that many stocks in the so-called “TMT” (technology, media and telecoms) were reaching full valuation. When we started to sell those stocks at the peak of the tech euphoria, we were, again, very much going against the grain and experienced some short-term pain in missing out on much of the rally that was still taking place in the sector at the time. We were a bit early in exiting stocks in the sector, but were able to capture the bulk of the run-up, and eventually that optimism and euphoria proved to be transitory.

Instead, we found significant undervaluation in unloved “old economy” stocks—the very materials, commodities and industrials that later came into favor when the tech bubble burst.

Hunting for Bargains in Europe

More recently, we have been very much in that contrarian mode of buying in the midst of pessimism in Europe. We believe the region presents a great opportunity for bargain hunting, despite the fact that many investors are still reluctant to invest there.

It was when Europe was in the depths of its sovereign debt crisis that the European banking sector started to really interest us. Since then, some of the stocks in the sector have rebounded, but essentially, we believe the valuation case largely rests on a discount to tangible book value. Our stress testing of the tangible book value indicates the discount may be largely unwarranted and also the possibility of a coming recovery in the return on tangible book value, from low single-digit levels to a more normalized level.

We are not expecting a robust recovery in Europe in the near term, as we think Europe is going to be muddling through its problems for some time. But, even in that scenario, some of the banking groups appear to us to be among the most sustainable franchises in Europe. They have good deposit bases, good wealth management franchises, good retail as well as commercial banking franchises, and many are still trading at discounts to tangible book value.

We also think that the normalized return on book value is likely to be higher than it is now. So we believe the sector offers us upside potential, not only in an earnings recovery and a growth of book-value recovery, but also through a higher market valuation as severe pessimism recedes.

As we have experienced through many market cycles before, buying against popular opinion requires fortitude, but it can ultimately prove rewarding. The European equity markets appear to have passed the trough, in our view, and the performance over the last 18 months has followed a very similar pattern to what we’ve seen in other times of excessive emotions in the market. 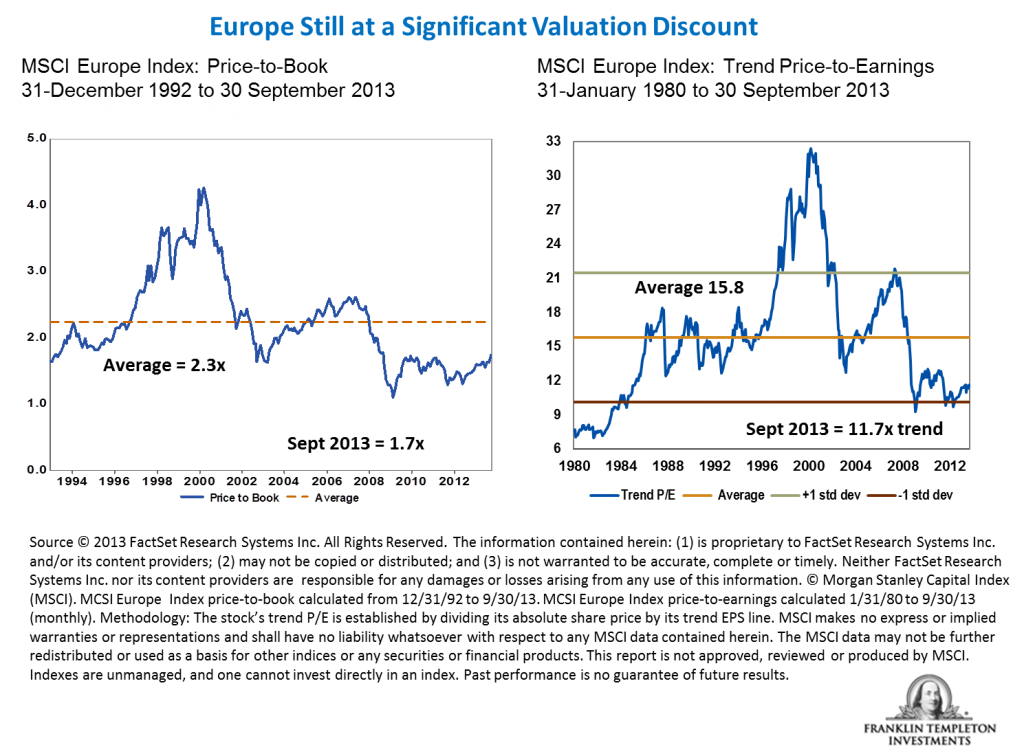 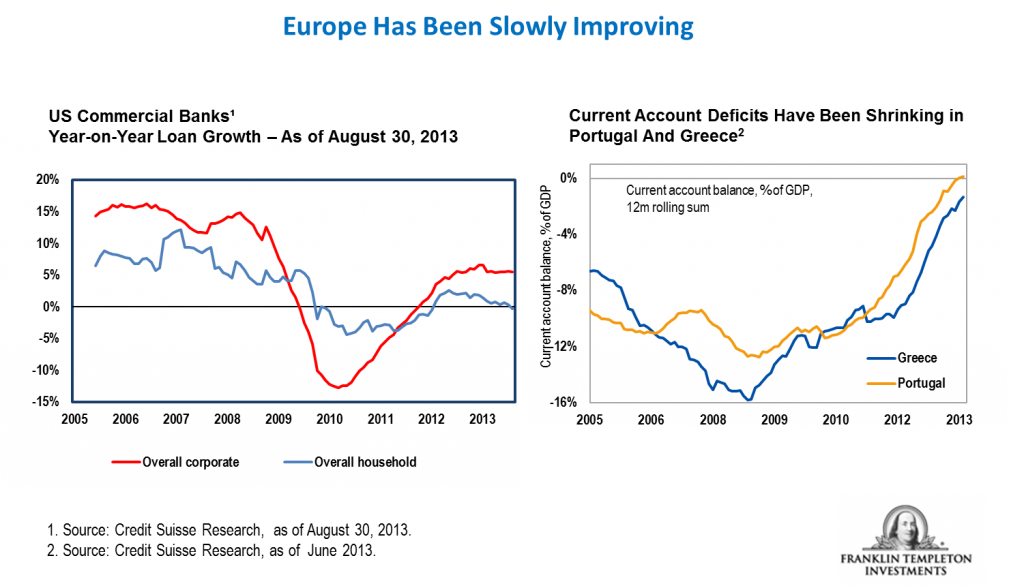 All investments involve risk, including possible loss of principal. Stock prices fluctuate, sometimes rapidly and dramatically, due to factors affecting individual companies, particular industries or sectors, or general market conditions. Special risks are associated with foreign investing, including currency fluctuations, economic instability and political developments. Investments in developing markets involve heightened risks related to the same factors, in addition to those associated with their relatively small size and lesser liquidity. Current political uncertainty surrounding the European Union (EU) and its membership may increase market volatility. The financial instability of some countries in the EU, including Greece, Italy and Spain, together with the risk of that impacting other more stable countries, may increase the economic risk of investing in companies in Europe.

2. Source: MSCI World Index. MSCI makes no express or implied warranties or representations and shall have no liability whatsoever with respect to any MSCI data contained herein. The MSCI data may not be further redistributed or used as a basis for other indices or any securities or financial products. This report is not approved, reviewed or produced by MSCI. Indexes are unmanaged, and one cannot directly invest in an index.