With key stock indices in the US closing the year near historical highs and many pundits predicting stronger growth rates both in the US and globally going into 2014, one would think bargains would be hard to find this year. January’s volatility, however, proved just how unpredictable markets can be. The recent market gyrations may be somewhat painful for many investors in the short-term, but the silver lining is that corrections can serve up buying opportunities, particularly for long-term, value-oriented investors like Cindy Sweeting, director of portfolio management at Templeton Global Equity Group. Despite the recent deterioration in market sentiment, she points to a number of trends and themes that are potentially supportive of continued economic and market strength. She and her team remain focused on finding individual stock values with good potential for cash generation that have previously been overlooked or unduly punished by market skepticism.

After a strong year for developed market equities in 2013, the general market consensus appears to be that developed markets will likely continue to outpace emerging markets and that the US is overvalued somewhat but that growth will likely be steady. Additionally, worries about Europe have generally taken a back seat to worries about China. Whether something detrimental will develop in equity markets this year is a coin toss, but if so, in our view, it will probably be connected to a big deterioration in earnings growth, given the expansion in valuation multiples we have seen over the last year. As bottom-up investors, we are less worried about the macroeconomic debates; we are primarily focused on determining where companies are in their earnings cycles, what will likely unfold in the way of normalized earnings and cash flows over the next five years, and where we think the market has mispriced that earnings and cash flow stream.

In the US, we believe the key is whether the economic recovery will be self-sustaining in the absence of the excessively easy monetary policy that the US Federal Reserve (Fed) has been providing via its longstanding Treasury asset purchase program known as Quantitative Easing (QE). Can the Fed orchestrate a steady, manageable rise in interest rates? Will employment and wage growth gather strength and create a virtuous growth cycle without Fed support? And will corporate earnings continue to come through as anticipated by the steady expansion we have seen in valuation multiples? These are all unknowns, but will likely be important parts of the equation for the US market.

In our view, US earnings have already reached or exceeded previous highs, and valuations are relatively stretched as the Fed begins to taper QE. We believe we can find some good values at the individual stock level, but not wholesale value in the US, as equity prices have built in a fair bit of optimism that all will be well. I think it is important to recognize that there are a number of positives in the US that could provide tailwinds to support economic growth in the absence of ongoing extraordinary monetary support.

Inflation has been subdued in the US, and weakness in China has been a contributing factor. One can think of lower oil and commodities prices as a sort of tax cut for US consumers, helping to free up disposable income. A US energy renaissance has been taking place, led by a boom in shale oil and natural gas. By 2015, the International Energy Agency predicts the US will become the world’s top oil producer.1 This energy revolution, the result of technological advances related to the extraction of oil and gas from existing wells, is leading to both rising production and a falling trade deficit; and the generally strong dollar that’s accompanying that falling trade deficit supports import purchasing power for consumers.

Households have done a lot of deleveraging since the 2008-2009 financial crisis, which has been helped by both a decline in absolute debt and an increase in asset prices. US household leverage is lower than it has been in at least a decade, so we think there is some scope for credit expansion, which could support risk assets. However, debt and asset levels matter less than whether people have jobs and whether personal income is growing. So we do need to see that nascent signs of the latter improve further.

US corporate balance sheets are generally in good shape, according to our research. Two decades of falling interest rates have allowed a gradual shift toward a longer-term debt structure, so there is a reduced risk of constantly rolling debt. And, consumer and corporate America are producing free cash flow of more than 8.5% of GDP, which is not that far from a 60-year high.2

US market bears note that US equity valuations are now above their long-term average and that profit margins are at record highs. We would note that much of the expansion in profit margins has come out of the gross margin lines of manufacturers that have benefited from globalization. And even with the further steepening of the yield curve, we expect this could add to earnings overall, because the net interest income of the financial sector is almost three times the interest expense of the rest of the US economy.

Where are we finding values right now? One area is in oil services, where a recent period of oversupply in the industry weighed heavily on these stocks globally. The pharmaceutical industry offers more mature value holdings, which we acquired at low multiples amid concerns about patent expirations. These stocks have generally done well and are being complemented in our portfolios by innovative biotechnology firms with undervalued drug pipelines as well as selected specialty pharma and medical technology firms.

Financials were hit extremely hard during the 2008–2009 financial crisis, and US and European bank valuations plunged to levels only seen twice before in the past 120 years, notably during the Great Depression of the 1930s and the Inflation Crisis of the 1970s. Over the past few years, many banks have rebuilt their balance sheets, altered their business mixes and cut costs. Financial valuations have tracked returns very closely, and both have recovered from the lows reached in mid-2011. We do not believe return on equity (ROE) will likely recover to prior peaks, but our analysis shows that bank holdings have potential to improve further, particularly as business conditions begin to normalize and lending activities (at some point in the cycle) resume.

Of course, there are always risks to even the most sanguine of outlooks. The biggest risk in the US, as we see it, is probably a significant back-up in longer rates. Fortunately, the starting point of inflation is low. Regardless of the macro environment, we will continue to do what we’ve always done – uncover individual bargains. We continue to look for stock opportunities in the US and around the globe where we see low valuations, improving fundamentals, and good prospects for sizeable return of capital to shareholders. 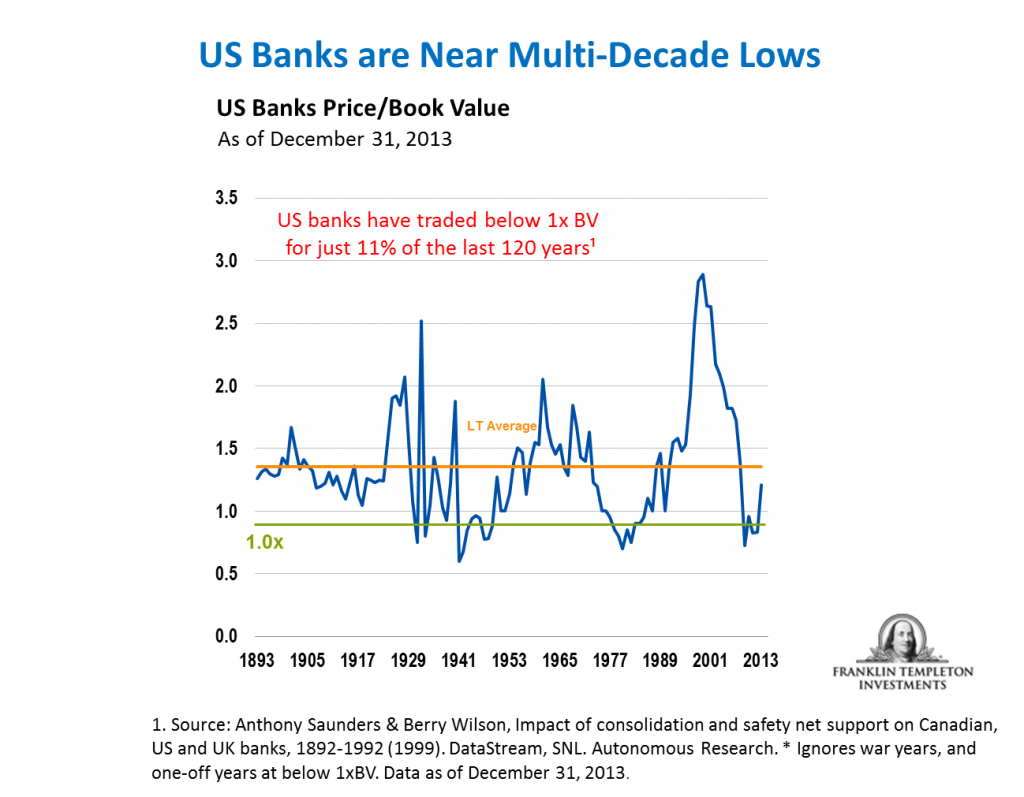 Cindy Sweeting’s comments, opinions and analyses are for informational purposes only and should not be considered individual investment advice or recommendations to invest in any security or to adopt any investment strategy. Because market and economic conditions are subject to rapid change, comments, opinions and analyses are rendered as of the date of the posting and may change without notice. The material is not intended as a complete analysis of every material fact regarding any country, region, market, industry, investment or strategy.