Volatile markets and an uneven recovery may appear to justify a cautious outlook for investing in Europe right now, while in the US the specter of higher interest rates might also be signaling a challenging market environment ahead. Philippe Brugere-Trelat, executive vice president, Mutual Series®, believes the investment case for European equities favors a more optimistic outlook and despite a bumpy start to the year for equities globally, he still sees the market as rife with potential opportunities for selective investors, particularly undervalued segments of the market. One place where he thinks caution is likely warranted? Japan.

I think there are reasons for global investors to be cautiously optimistic right now, but I would really put the emphasis on “optimistic” rather than “cautious.” To sum it up most simply in the case of Europe, economic, financial and political conditions have been improving, which is providing investors an opportunity to purchase strong corporate assets at what we believe to be attractive prices at a moment in time when the region appears on the cusp of a recovery.

Despite signs of progress, the European recovery remains fragile, and there remains a risk of deflation. However, the European Central Bank (ECB) still has at its disposal a very large and unused arsenal of measures to combat it. Unlike the US Federal Reserve, the ECB never engaged in quantitative easing (QE), a central bank policy of issuing currency specifically to purchase financial assets, in a significant way over a prolonged period of time. So, with a relatively small balance sheet, the ECB is ready to act if need be.

The big question investors are grappling with is how the reduction, and eventual end, of QE will likely impact not only US equities but the global markets at large, which have been fuelled in part by this liquidity. As I see it, the tapering of QE could cap multiple expansion, or the price investors will be willing to pay for the shares based on future earnings expectations. At this point, I think a further rise in US equities will have to come from higher earnings, which themselves will require higher top-line growth.

Europe also has limits to multiple expansion. However, multiples for many European companies are still much lower than in the US when it comes to price-to-earnings or price-to-cash flow measures and also in regard to dividend yields. So in that regard, we are finding what we believe to be good values in Europe. 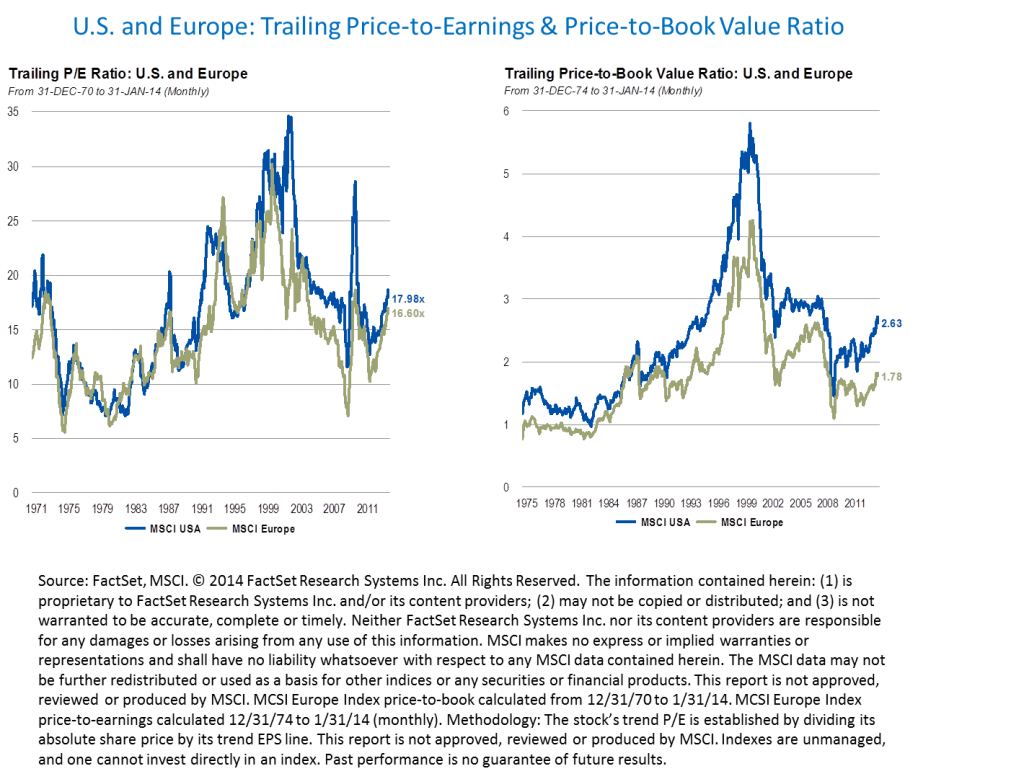 During the European debt crisis, European corporates reacted vigorously by cutting their cost base; as a result, many are much leaner and meaner today. I believe even a modest improvement in the economy could improve their operating leverage further, and could produce earnings which may well surprise, particularly at a time when general market expectations are at rock bottom. These rock-bottom expectations tell me that risks of disappointment are likely low, and the upside potential could be fairly good— assuming there are no unexpected shocks.

That said, at Mutual Series, we are bottom-up investors looking for individual stock opportunities, regardless of the macroeconomic environment for a given country or region as a whole. We go where we find value. So while we do like Europe very much right now and are finding opportunities there, we also like the US because it offers us a much bigger universe. In the US, the economic environment is much more positive and recovery further along than in Europe, and we have been finding new opportunities in sectors where we were not historically present, like information technology.

In Europe, defensive stocks in which Mutual Series has been traditionally invested — in the food, drink and tobacco sectors — have become very expensive, in our view. As a consequence, we have shifted our focus to investing more in the consumer discretionary sector; to more domestic-oriented, more European-focused businesses, in subsectors like automotive, leisure, hotels, and financials. We are not very keen on European banks right now; we’re much more positive on European insurance companies because they generally have less leverage than banks, and their track record at managing risk has been much better.

One area I view with a fairly high dose of caution is Japan, even though it was an investor favorite last year, as Japan’s benchmark Nikkei Stock Average rose 57%.1

I think the problem in Japan is not necessarily deflation; it’s structural. Japan’s economy is essentially closed to the rest of the world. Immigration is non-existent, corporate governance is sometimes doubtful, and the population is retiring at a very fast rate.

When populations retire, they stop saving. The problem for Japan is that it has one of the highest, if not the highest, debt-to-GDP ratio in the world. Japan’s gross public debt is gigantic by US or even European standards, at more than 240% of GDP2, and the main reason why Japan has been able to carry on is that for decades it’s been financing that debt through domestic savings. Now those domestic savings are dwindling because more and more people are retiring.

I think the aggressively loose monetary policy we’ve seen in Japan (dubbed “Abenomics”) in the past year is certainly producing results if you measure that based on the stock market’s performance on a short-term basis. However, we don’t see a lot of traction in the long term, so Japan on a country-level is not one I’m particularly focused on in terms of finding potential opportunities for our portfolios.

So far, 2014 is shaping up to be a challenging year, but an environment which we think could be good for stock pickers. We are finding mixed performances from companies across the board, which we think suits our value-driven, bottom-up investment approach.

All investments involve risks, including possible loss of principal. Value securities may not increase in price as anticipated or may decline further in value. The fund’s investments in foreign securities involve certain risks including currency fluctuations, and economic and political uncertainties. Smaller-company stocks have exhibited greater price volatility than larger-company stocks, particularly over the short term. The fund’s investments in companies engaged in mergers, reorganizations or liquidations also involve special risks as pending deals may not be completed on time or on favorable terms. The fund may invest in lower-rated bonds, which entail higher credit risk. These and other risk considerations are discussed in the fund’s prospectus.