Separated by nearly 4,000 miles of sea, the economies of Australia and Japan are often lumped together under the Asia Pacific (APAC) label. Both of these countries can be considered global powers and powerful GDP generators, but their economies, the challenges they face and their responses to those challenges have been very different. Don Huber, vice president, research analyst and portfolio manager, Franklin Equity Group, looks at how these APAC powers are navigating their unique issues and shares his market outlook for each.

Australia’s economy and market, in some respects, appear as if they have been on a treadmill without an off switch. Thanks largely to a commodities boom and demand from China, Australia skated right through the global financial crisis—which occurred approximately five years ag­o­­—that caused many other countries to sink into recession. In this environment, Australia has posted positive GDP growth every year since 1991.1

China’s demand for commodities has helped fuel Australia’s growth, as China accounted for just under 30% of Australian exports in 2012–2013, a rising trend seen over the last five years.2 The benefits from strong commodity prices over the past decade have been significant for Australia, even as it strives to diversify its economy. Strong commodity demand has brought meaningful investment by mining companies in Australia, although mining capital expenditures may decline, given an anticipated slowing of China’s growth rate.

The growth in the country’s economy generally helped drive wage growth and inflation, especially in the mining sector, making Australia an expensive place to live and work. Many Australian consumers have been feeling the wealth effect of higher property prices; residential property prices in Australia have risen 9.3% in the last 12 months nationwide and 13.8% in Sydney.3 This wealth effect has fueled consumer spending recently, as well as a bit of a construction boom.

Australia’s property boom has been supported by relatively low interest rates. The Australian Central Bank (the Reserve Bank of Australia) has been accommodative and, in my view, fairly adept at managing the economy over time given the positive results its economy has seen. In May, the Reserve Bank of Australia decided to leave its benchmark rate unchanged at 2.5%, citing some concerns about employment and an expected decline in natural resource sector investment spending.

While natural resources are a vital part of Australia’s economy, it is important to realize there are potential opportunities beyond those that are purely commodity-based. Looking at the benchmark MSCI Australia 200 Index, 75% of its constituents are not tied directly to natural resources; the largest sector weighting (46%) is financials.4 That said, commodity pricing and demand do have a knock-on effect on many seemingly unrelated companies and, of course, on government revenues.

At this time, the financial sector appears to be in good shape, in our view, as Australia’s banking sector has managed to avoid some of the problems plaguing other markets. The consumer also seems to be in pretty good shape; savings rates are high, and the rising property boom has resulted in an increase in new mortgages. The rise in property prices has created talk of a housing bubble in Australia, but for now, demand remains strong.

I believe the new austerity budget Australia’s government announced recently will test the balancing act as the economy works through the impact of slowing commodity demand. In raising taxes and cutting social benefits, the conservative government seeks to reduce the fiscal deficit and lower the growth of public debt—neither of which is at a particularly high level compared to most of its developed-world peers.

We’ll see how this all plays out, but for now, Australia seems to be managing fairly well, and its stock market has reflected that. 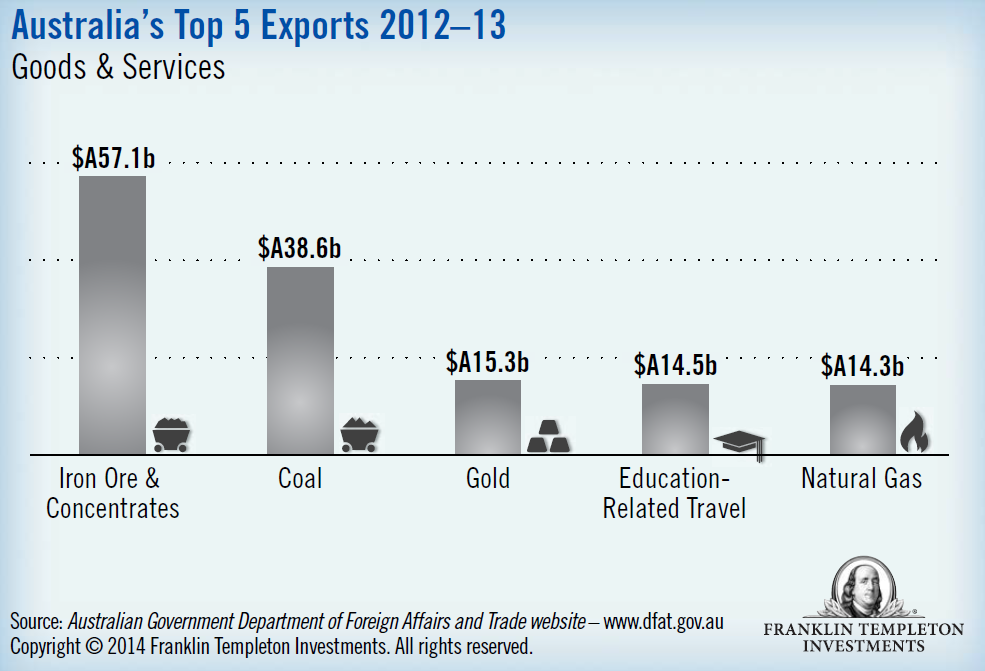 So far in 2014, Japan’s equity market has disappointed investors after a strong performance in 2013. Among all developed and emerging markets, Japan has been one of the worst-performing equity markets globally5 in local currency terms and US-dollar terms. Last year, the market was fueled by optimism surrounding Abenomics, the name given to Prime Minister Shinzo Abe’s ambitious plan to revitalize Japan’s economy through massive fiscal and monetary stimulus measures and a package of reform programs tied to structural improvements in the economy.

We think three things are driving this year’s turn in investor sentiment toward Japan. First, there has been a “risk-off” movement due in part to tensions between Ukraine and Russia that have engulfed Europe and the rest of the world. The price of the yen has risen as a result. A stronger yen makes Japan’s exports less competitive globally, so investors have viewed this trend negatively. Second, there appear to be some concerns about the sufficiency of fiscal and monetary stimulus taking place, in light of a new value-added tax increase that went into effect on April 1, 2014. With this new tax in place, some observers are questioning whether more stimulus is needed and whether the Bank of Japan may be behind the curve. Third, many have been disappointed with the pace of reform in Japan. Reform is the “third arrow” of Abenomics, and one which, I think, investors feel has been underwhelming. Clearly there are political and cultural impediments to change, as there are in any country. If Abenomics is to succeed in generating self-sustaining long-term growth, we believe this third arrow of structural and regulatory reforms needs to hit its target.[perfect_quotes id=”3204″]

One area of reform that is underway in Japan is the creation of national strategic zones, or “tokku.” Six regions have been designated to test various aspects of deregulation in areas such as medical care, new business development and agriculture. Like much in Japan, the details are still in process. But I think this effort, if successful, could be an exciting test bed for reform that could then be rolled out elsewhere in the country.

As we’ve looked at investments in Japan, we’ve been drawn to a couple of types of companies. One of those is online retailers; the penetration of online retailing in Japan is behind other developed markets but is developing rapidly. So there is a potential benefit of a secular shift that, I think, makes up for some concern about the pace of consumer spending. The other area of interest to us is industrial export, where some players are already competitive globally in fields like robotics and factory automation. I believe companies that are competitive and have strong business models should ultimately benefit if Abenomics is successful in driving down the value of the yen.

In the past few years, we have seen investors’ concerns and euphoria at certain times tied to equities as an asset class or a region rather than discerning between particular companies within a market. Our investment approach is to analyze underlying company fundamentals. We make decisions on a stock-by-stock basis, whether it’s in Japan, Australia or elsewhere, and regardless of whether investors are flocking to a particular market, or fleeing from it.

Don Huber’s comments, opinions and analyses are for informational purposes only and should not be considered individual investment advice or recommendations to invest in any security or to adopt any investment strategy. Because market and economic conditions are subject to rapid change, comments, opinions and analyses are rendered as of the date of the posting and may change without notice. The material is not intended as a complete analysis of every material fact regarding any country, region, market, industry, investment or strategy.

4. Source: MSCI. MSCI makes no express or implied warranties or representations and shall have no liability whatsoever with respect to any MSCI data contained herein. The MSCI data may not be further redistributed or used as a basis for other indices or any securities or financial products. This report is not approved, reviewed or produced by MSCI. Indexes are unmanaged, and one cannot invest directly in an index.