European equities have garnered a fair share of attention lately as leading indicators suggest economies in the region are starting to recover from years of crisis and austerity-induced recessions. While some observers will point to recent equity market volatility as a sign that investors should remain defensive when selecting stocks in the region, Philippe Brugere-Trelat, executive vice president and portfolio manager, Franklin Mutual Series®, says he’s encouraged by recent developments. He also believes Europe is now an excellent market for stock pickers that are willing to stand by their investment convictions.

For some years, many investors felt that the succession of financial and sovereign debt crises would overwhelm Europe, leading to talk about country defaults, a collapse of the single currency, and even the breakup of the European Union (EU). More recently, though, conditions appear to have improved.

I think there is now a great deal of interest in European equities; it’s evident that flows into European equities have been pretty strong recently, and I think this helps to explain the strength of the euro. Even so, it appears to us that many investors may still not be as invested in the region as they have been in the past.

I believe the European Central Bank (ECB) in June gave compelling new reasons for investors to take an active interest in Europe. The package of measures was extensive, and included not only a further reduction in its main interest rate for lending to banks, but the first-ever negative deposit rate to be implemented by a major central bank. This negative rate, designed to discourage banks from sitting on their cash, would apply to commercial bank funds held with the ECB that are in excess of the reserve requirement.

The ECB also introduced plans for a series of Targeted Longer-Term Refinancing Operations (TLTROs) at very low fixed rates as a new measure to help boost bank lending to the non-financial private sector over the next two years, and said it would intensify preparations for the outright purchase of certain asset-backed securities (ABS).

To me, these are very good signals to send investors and very good measures to implement. On the whole, the package was not as extensive as I’d hoped for, but it was clearly better than most had expected.

From a liquidity and lending standpoint it has been very positive in my view, because the TLTRO program for up to €400 billion should help small- and mid-sized companies invest in growth. I think this is particularly true for the southern part of the eurozone region, which has been hardest hit by the fallout of the 2007-2008 financial crisis.

The TLTROs are likely to help a lot of banks, particularly in Italy, to fund themselves at cheaper rates. They should allow the banks to increase their net interest margins and therefore their earnings. At the same time, the TLTRO facility will potentially enable them to make very profitable loans to precisely those companies in regions that need it the most.

This is very important to me as an investor in European equities because current valuations do not appear to take into account any earnings improvements among those European companies that have large exposures within Europe. I particularly like companies that are in a position to benefit from their exposure to a recovery in the hardest hit regions of the eurozone. Many of these companies have been actively reducing their costs throughout the economic recession. They are now lean and mean, and this improves operating leverage, so that even a modest improvement in the economy could potentially produce a direct, positive impact on their earnings.

I recognize that when markets experience frequent bouts of volatility, many investors would prefer to invest in defensive sectors: food, healthcare and telecoms tend to perform well in uncertain markets because they generally provide stable earnings and often a dividend. I think this approach can work well when the economic outlook is weak, as it has been in recent years.

But as I see it, continuing to rely on defensive stocks in Europe is a risky strategy now because I believe these stocks are trading at unattractive levels. Moreover, many of these companies have enjoyed several quarters of rising earnings and are now close to the top of the cycle, so they could potentially face earnings deceleration going forward. 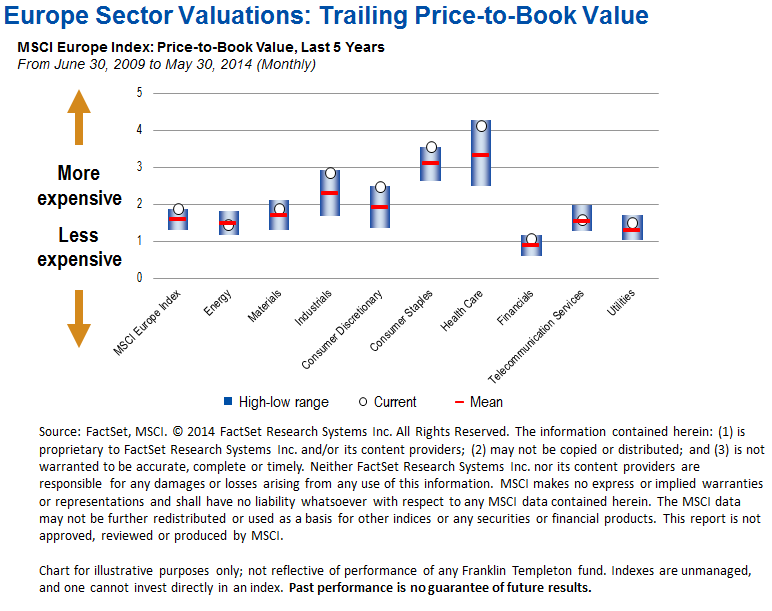 I believe a better strategy for investing in a market in the early stages of a recovery is to stay focused on equity fundamentals and wait for earnings to respond to the improving economy. In my view, any volatility we come across is likely temporary. I also believe that at times like these, it’s more important than ever to do your homework as an investor– stick to your fundamental research and try to look beyond a short-term investment horizon.

All investments involve risks, including possible loss of principal. Value securities may not increase in price as anticipated or may decline further in value. The fund’s investments in foreign securities involve certain risks including currency fluctuations, and economic and political uncertainties. Smaller-company stocks have exhibited greater price volatility than larger-company stocks, particularly over the short term. The fund’s investments in companies engaged in mergers, reorganizations or liquidations also involve special risks as pending deals may not be completed on time or on favorable terms. The fund may invest in lower-rated bonds, which entail higher credit risk. Please consult the prospectus for a more detailed description of the fund’s risks.

All investments involve risks, including possible loss of principal. Value securities may not increase in price as anticipated or may decline further in value. Special risks are associated with foreign investing, including currency fluctuations, economic instability and political developments. Because the Fund invests its assets primarily in companies in a specific region, it is subject to greater risks of adverse developments in that region and/or the surrounding regions than a fund that is more broadly diversified geographically. Political, social or economic disruptions in the region, even in countries in which the Fund is not invested, may adversely affect the value of securities held by the Fund. The Fund’s investments in smaller-company stocks carry an increased risk of price fluctuation, especially over the short term. The Fund’s investments in companies engaged in mergers, reorganizations or liquidations also involve special risks as pending deals may not be completed on time or on favorable terms. These and other risk considerations are discussed in the fund’s prospectus.