After a year when it seemed as if US equities could move only higher, vulnerabilities have begun to surface in 2014. Equities now seem to be at a mid-year crossroads, with many investors asking whether there is still potential upside to explore in the market—or at least, certain sectors. Don Taylor, chief investment officer, Franklin Equity Group®, US Value, and portfolio manager of Franklin Rising Dividends Fund, thinks there’s still value to be found in the US market over the long term. And, he’s using setbacks to add stocks to his dividend-minded portfolio.

After a pretty spectacular 2013, at times this year it has felt as if equities were treading water, even as we saw major market indexes reach or approach new all-time highs. Despite a few short-term setbacks, though, I still feel pretty good about the US market over the long-term.

One reason I am generally positive about US equities is that interest rates remain relatively low: the yield on the US 10-year Treasury note is currently lower than at the start of the year, when it was yielding 3%.1  The credit spread, which measures the difference in yield between Treasury securities and higher-yielding corporate bonds, is also currently very narrow, which could indicate that there is confidence about the economy within the US credit markets.2

I think the US energy and manufacturing renaissance, spurred on by the development of shale as a source of energy, is also an important source of long-term support. I believe this renaissance is still in the early stages. For the last seven or so years, oil and natural gas production in the United States has increased substantially, and the increased availability of cheap natural gas is now leading to more investment and a big multiplier effect in manufacturing.

On a macro level, I think the most probable scenario is for the US to enter an economic environment where growth could accelerate and interest rates begin to rise. And when you contrast this with much of the rest of world, where there seems to be a lot of uncertainty, the US looks pretty attractive both in relative terms and in an absolute sense.

At the individual-company level, large-cap companies in particular have been building up large cash reserves, and there now seems to be a lot of pressure to put it to good use or return it to shareholders.

However, the market hasn’t generally been keen on rewarding companies that make large-scale capital expenditures. We think investors could be fearful that companies could end up wasting shareholder capital by building or acquiring plants and equipment that they really don’t need.

We have seen companies generally being rewarded when they take a more pragmatic approach to managing their capital by pursuing acquisitions, repurchasing their shares or boosting their dividends.

Clearly, the weak US first-quarter GDP spooked some people. But I think it’s important to put that data and the current environment in the US into perspective. I think markets are correctly assessing that early year GDP weakness was primarily influenced by severe winter weather. The data we have seen more recently have tended to support the view that most measures of economic activity are broadly strengthening.

Low Volatility: Cause for Concern?

A defining feature of the market in the first half of this year has been a general lack of volatility in equity markets. Some people have turned this into a cause for concern due to perceived parallels with the lead-up to the 2007–2008 financial crisis, a time when volatility was similarly low. But I don’t necessarily see low levels of volatility as a problem. There have been extended periods of very low volatility, such as in the early to mid-2000s and early to mid-1990s, when the US equity market continued to do well.

It is true that volatility was low until early 2007, and it did pick up during the financial crisis that followed. But I see no particular reason to read too much into recently low levels of volatility and draw any conclusions that the US markets now are headed toward the same course as a result. 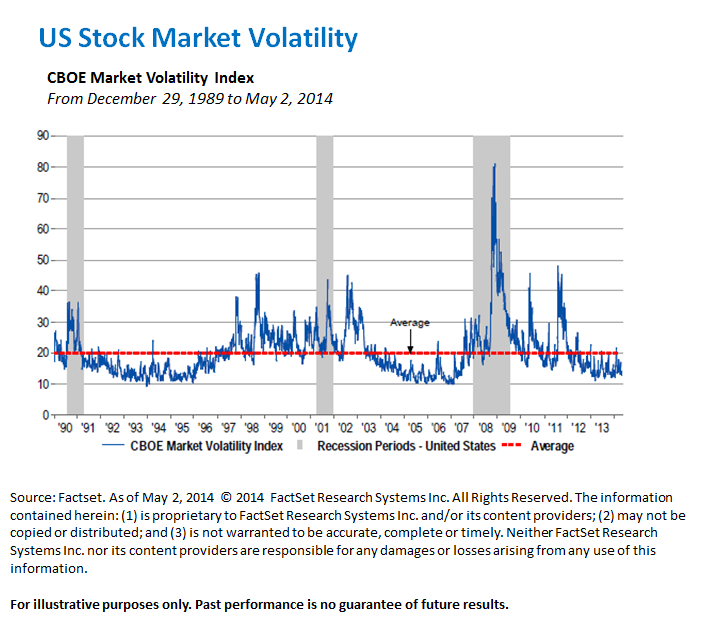 As we search for potential investments for our portfolio, we think there are important distinctions to make among dividend-paying companies. As we do expect interest rates to eventually move higher, companies that would typically have a higher dividend yield but slower dividend growth rates would tend to behave more like bonds in that their share prices would generally tend to decline. This is because income-seeking investors tend to buy these stocks to get the same steady income they would expect to receive from a bond. But the rising interest-rate environment we expect to eventually see, as central banks tighten policy to prevent price inflation, is also one where bonds do not generally do well. We think prices of slower-growth dividend-paying stocks also tend to decline when interest rates rise because during times of dynamic growth investors are able to find better-yielding securities elsewhere.

Our emphasis going forward is likely to be more on dividend “growers” than dividend “yielders.” When selecting stocks for our portfolio, we think it’s important to determine what the drivers of that growth are. In particular, we look for companies that could potentially benefit more in a period when dynamic growth in the economy eventually leads to higher interest rates, and we generally avoid stocks with higher payout ratios,3  because they tend to behave more like bond proxies.

Looking across sectors, technology has become an interesting area to uncover businesses that are growing their dividends. Only 10 or 15 years ago, technology was not a sector that we would likely have been considering for the portfolio. Today, there are some technology companies that have established the kind of long-term record of raising their dividends that would meet our criteria for consideration.

We recently added Qualcomm4 and Microsoft5  to our portfolio, for example. At the other end of the scale, financial services used to produce many companies that would qualify. But during the financial crisis, most banks either cut their dividends or in some cases stopped paying them altogether. There are still a few insurance companies that meet our screens, but that isn’t currently an area we are particularly focused on. Eventually I think some of the banks and other financial services companies may again have the kind of dividend records we are looking for, but I believe that’s likely to be several years away.

What we have been striving to do through our dividend-growth strategy is cut a middle ground, attempting to iron out the peaks and valleys and aiming for less volatility than in the overall market.

Don Taylor’s comments, opinions and analyses are for informational purposes only and should not be considered individual investment advice or recommendations to invest in any security or to adopt any investment strategy. Because market and economic conditions are subject to rapid change, comments, opinions and analyses are rendered as of the date of the posting and may change without notice. The material is not intended as a complete analysis of every material fact regarding any country, region, market, industry, investment or strategy.

To get insights from Franklin Templeton Investments delivered to your inbox, subscribe to the Beyond Bulls & Bears blog. For timely investing tidbits, follow us on Twitter @FTI_US and on LinkedIn.

All investments involve risks, including possible loss of principal. Value securities may not increase in price as anticipated, or may decline further in value. While smaller and midsize companies may offer substantial opportunities for capital growth, they also involve heightened risks and should be considered speculative. Historically, smaller- and midsize-company securities have been more volatile in price than larger-company securities, especially over the short term. These and other risk considerations are discussed in the fund’s prospectus.

1. Source: US Department of the Treasury.

3. The proportion of earnings paid out as dividends to shareholders, typically expressed as a percentage.