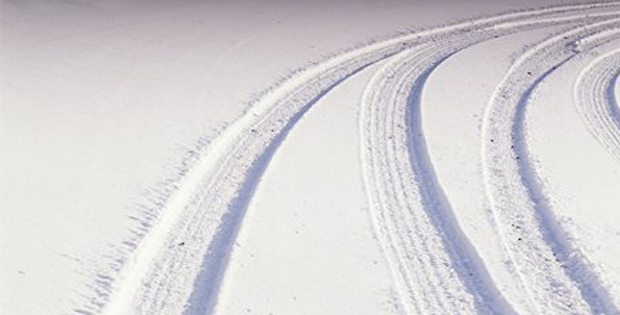 As the crisis in Ukraine and resulting geopolitical tensions between Russia and the West continues with no durable solution yet, many investors have responded by exiting European companies with exposure to the Russian economy. But even as evidence mounts that the Ukraine crisis is taking a toll on many European economies, Philippe Brugere-Trelat, executive vice president and portfolio manager, Franklin Mutual Series®, thinks it would be imprudent for long-term investors to give up on investing in Europe. Strong corporate earnings momentum, high dividend yields and the possibility of additional support from the European Central Bank (ECB) are just some of the reasons why he remains confident that, once the crisis clears, the recovery in Europe should resume.

Economic data coming out of the eurozone in recent weeks have proven disappointing, and there’s no doubt in my mind that the conflict in Ukraine has been a contributory factor. The weakness was especially evident in the recently published second quarter eurozone GDP figures, particularly from Germany. As Europe’s largest economy, Germany is supposed to be the engine of recovery for the region.

Overall, second-quarter GDP growth for the eurozone was flat versus the previous quarter, undermining expectations for continued growth and stoking concern that the eurozone recovery had stalled. Within the region, Germany’s second-quarter GDP was down 0.2%, taking everybody by surprise.1 As Germany’s economy is the one most exposed to Russia, I think this is directly related to the Russia-Ukraine tension.

We expect the eurozone’s Q3 data will probably be weak as well, in part due to the exchange of tough trade sanctions in July between Russia and the West – the US and Western Europe, including Germany. We are already seeing disappointing German factory orders data and German companies putting expansion plans on hold. German capital expenditures have been weak, and overall business confidence in the country has been dented.

As a result, we think there is now a possibility that the expected recovery of the European economy may be delayed, especially if the political tension escalates. 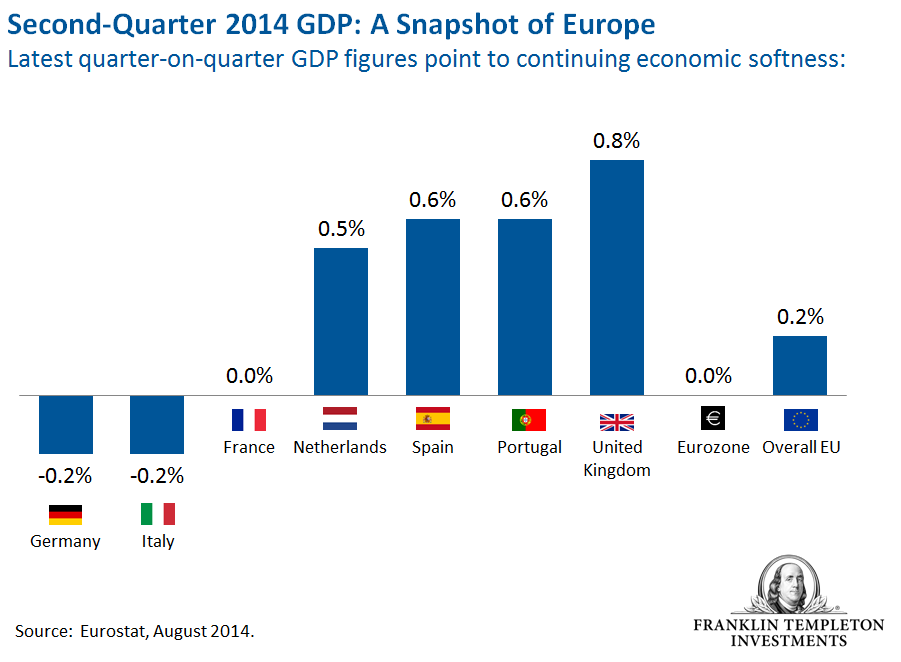 But we believe there are a number of other developments that could potentially provide some support to markets, even if the crisis persists. First of all, the ECB has demonstrated that it is ready to step in with a much more aggressive set of policy measures if necessary, including quantitative easing. Also, I would expect the euro could weaken further, which actually might help support the European economy by boosting the competitiveness of European exports.

While the situation in Ukraine currently looks troubling, I do not believe Russia can afford a prolonged crisis. The Russian economy could already be in recession or heading toward one, and the lost production due to western sanctions, coupled with supply shortages and higher consumer prices that Russians are facing, could erode President Putin’s support over time.

More importantly, as I see it, it is in the long-term interests of both Russia and Europe to end this conflict because each needs what the other possesses: Russia needs to develop its resource-based economy and cannot develop its own oil and gas fields without European capital and technology; and Europe needs Russian gas to supply its power stations. President Putin is very aware of this, and I believe this crisis is likely to be resolved peacefully, possibly before year-end, because it seems to me there is no other viable solution.

In the meantime, I believe that the shares of some European companies exposed to Russia have been disproportionately punished by events, and this suggests to us that now is a good time to consider buying European stocks.

One reason to be positive about European companies, in my view, is that if you look beyond the short-term weak economic data, earnings results at the company level have actually been better than expected. Overall, European company earnings looked solid in the second quarter 2014. Add to that a generally upbeat forward guidance for the next two or three quarters, and it’s not hard for us to be optimistic about growth prospects for European companies.

The fact is that much of the expected growth is coming from beyond Europe’s borders. European companies’ second-quarter earnings illustrated this point well, as a big portion came from North America and China. These markets have been growing nicely and are much more important than Russia for many companies in Germany and elsewhere.

I believe European companies could also expect a nice tailwind from the weakening euro, which fell below US$1.30 (as of September 11) from just under US$1.40 as recently as May 6, 2014.2 This is already having an impact on corporate earnings in Europe, and we expect it could be good for European equities as a weaker currency could make these companies even more competitive globally going forward.

Another dynamic that makes European equities appealing to us right now is that the average dividend yield on the European S&P 500 index equivalent, the Stoxx 600, is much more attractive than in the US.  That represents a nice payout to investors just for holding shares in these companies, especially when, as of September 1, the German 10-year bund was yielding less than 1%.3 That doesn’t even take into consideration the potential for companies to improve future revenues and operating margins.

German equities, in particular, are increasingly appealing to us, and we are uncovering values amidst the Russian crisis. We like consumer discretionary stocks because their valuations are very low in relation to other sectors, such as healthcare and consumer non-discretionary.  We have found many companies with good balance sheets, good cash flow and good management within this space. More specifically, we currently like automotive, retail, leisure and financial stocks, including banks. We also favor general industrials and are finding companies undergoing restructuring particularly attractive today.

With any crisis or other short-term market dislocation like the one we have seen in Europe, it’s important to focus on the big picture. When we invest, we have a time horizon that is expressed in years, not in months. We are very often contrarian, and we can also be early.  That said, we see no reason not to continue looking for long-term value in places where others see only the short-term risks—Europe being a case-in-point.

All investments involve risks, including possible loss of principal. Value securities may not increase in price as anticipated or may decline further in value. The fund’s investments in foreign securities involve certain risks including currency fluctuations, and economic and political uncertainties. Smaller-company stocks have exhibited greater price volatility than larger-company stocks, particularly over the short term. The fund’s investments in companies engaged in mergers, reorganizations or liquidations also involve special risks as pending deals may not be completed on time or on favorable terms. The fund may invest in lower-rated bonds, which entail higher credit risk. Please consult the prospectus for a more detailed description of the fund’s risks.

All investments involve risks, including possible loss of principal. Value securities may not increase in price as anticipated or may decline further in value. Special risks are associated with foreign investing, including currency fluctuations, economic instability and political developments. Because the Fund invests its assets primarily in companies in a specific region, it is subject to greater risks of adverse developments in that region and/or the surrounding regions than a fund that is more broadly diversified geographically. Political, social or economic disruptions in the region, even in countries in which the Fund is not invested, may adversely affect the value of securities held by the fund. The fund’s investments in smaller-company stocks carry an increased risk of price fluctuation, especially over the short term. The fund’s investments in companies engaged in mergers, reorganizations or liquidations also involve special risks as pending deals may not be completed on time or on favorable terms. These and other risk considerations are discussed in the fund’s prospectus.

Investors should carefully consider a fund’s investment goals, risks, charges and expenses before investing. To obtain a summary prospectus and/or prospectus, which contains this and other information, talk to your financial advisor, call us at (800) DIAL BEN/342-5236, or visit franklintempleton.com. Please carefully read a prospectus before you invest or send money.