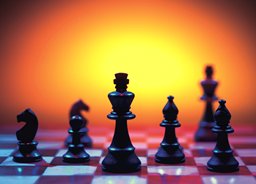 The eurozone appeared to have emerged from a prolonged recession when conflict in Ukraine intensified earlier this year with Russia’s annexation of Crimea. The continued complexity of the crisis in Ukraine now threatens to derail Europe’s fragile economy, and European stocks have suffered. That said, more attractive valuations in Europe may lure investors back to European stocks, according to Tucker Scott, portfolio manager and executive vice president, Templeton Global Equity Group™. He sees opportunity through the fog of crisis and makes a case for finding value in Europe—even in Russia.

Investing in Russia has generally been considered risky, and the current tension between Russia and the West over the situation in Ukraine provides yet another example of why. There are times, however, when we think investing in Russia can make sense. With the Russian stock market trading at a discount to book value—it traded at 0.6 times book value early this year1— we believe now may be a fair time to revisit investing in Russian equities. We’ve come a long way from the days when BRIC (Brazil, Russia, India, China) mania was in full swing in the mid-2000s. At that time, Russian equities traded up to over two times book value. We consider that a very expensive price for the Russian stock market. Along with the book value discount, Russian stocks have also offered high dividend yields in the last couple of years,2 which we think potentially sweetens the investment case.

From an investment standpoint—particularly in Russia—we think it’s important to look for companies that adhere to strict corporate governance practices.3 And, we look for stocks with the potential to perform well in the long run, despite periods of short-term crisis. We have found that in some cases, share prices of Russian companies have declined in value so far that much of the news regarding the Ukraine conflict was already discounted, and subsequent geopolitical developments haven’t created additional market aftershocks. 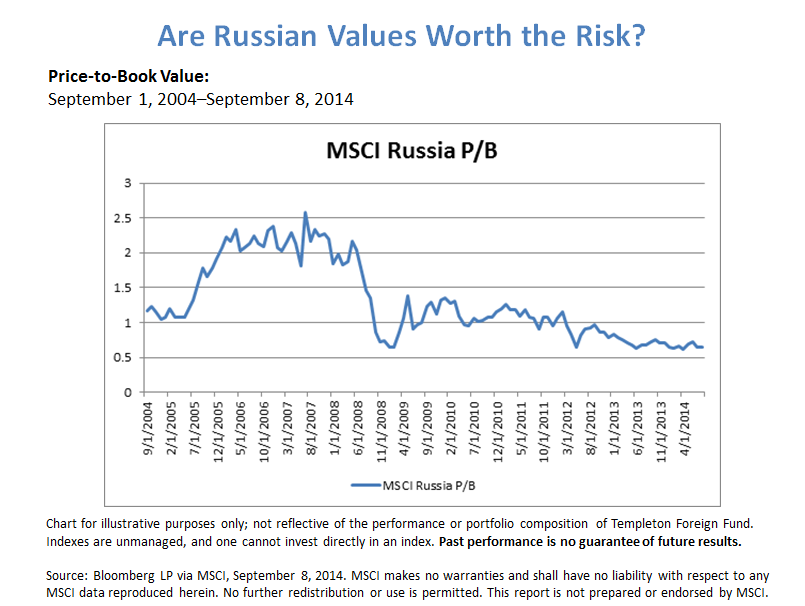 In Europe, we have found many companies outside of Russia that have also been negatively impacted by the crisis. One example is the German retailer Metro4 whose Metro Cash & Carry supermarkets serve Russian consumers. It’s an interesting situation; Metro has fallen more than 20% since November 2013,5 most of which, we think, was due to investors’ concern over the company’s Russian ties.

We’re seeing attractive values in European equities overall, particularly when compared with those in the United States. The US stock market, as represented by the S&P 500, currently has a price-to-earnings (P/E) ratio of almost 17 versus Europe’s 14, based on the MSCI Europe Index.6 That doesn’t even begin to tell you how cheap Europe’s market is compared with the US market, because the ratio is using current profits, which have been very elevated in the United States and depressed in Europe.7 If we adjust earnings in terms of where we think they could be headed in the future, we think this gap between P/E ratios could widen even further. From a macro perspective, I think Europe is likely near the bottom of its profit cycle, while the United States is likely near the top. [perfect_quotes id=”3661″]

I think that the cause of this unusual divergence can be traced back to the different paths Europe and the United States followed after the 2008 financial crisis. To make a long story short, the Europeans instituted austerity plans, while the United States launched stimulus programs. Policy was very tight in Europe, and that essentially killed the recovery, in my view. In general, the strict monetary policy also made profits for European companies drop farther than those of US companies.

Continuing on the profit-comparison theme from a micro perspective, let’s look at the energy sector. There has been some degradation in overall oil and gas earnings in both the United States and Europe since the mid-2000s, but it’s been more concentrated in companies with greater exposure to Europe, where it’s much harder to control costs because of labor inflexibility and labor regulation. With less revenue to spread over those costs, profits get crimped. But when an economic recovery does come in Europe, profits for European companies have the potential to increase quickly. We are looking for companies that we think can take advantage of that potential.

We also are, in general, still finding value in European banks and financial companies, although not as much as we did a few years ago during the height of the eurozone sovereign debt crisis, when some European bank stocks were trading at nearly half their tangible book value. While we are not as focused on the banking sector today as we were then, all in all, we still think it’s an attractive place for value hunters. Since early this summer, some of the bank stocks have again retreated a bit, and French bank stocks in particular are now on our radar. European insurance companies also look attractive to us right now.

Outside of Europe and the United States, opportunities are surfacing for us in emerging markets. Generally, their performance has been disconnected from that of developed markets, especially the United States. In the last three years, emerging markets have risen only 15%, while the S&P 500 has jumped 75%.8 China, for example, appeared to be in a bubble in 2007, trading at seven times book value.9 The Chinese market has been trading at 1.4 times its book value; in value terms it’s fallen by 80% from November 2007 to May 2014.10 It also has recently traded at 9 times earnings and has offered a very competitive dividend yield.11 So, we think it’s prudent to look at emerging markets in times like these, as opposed to when they perform very well and are very expensive. As the late Sir John Templeton once said about the potential of such a contrarian approach: “To buy when others are despondently selling and to sell when others are avidly buying requires the greatest fortitude and pays the greatest ultimate rewards.”

Tucker Scott’s comments, opinions and analyses are for informational purposes only and should not be considered individual investment advice or recommendations to invest in any security or to adopt any investment strategy. Because market and economic conditions are subject to rapid change, comments, opinions and analyses are rendered as of the date of the posting and may change without notice. The material is not intended as a complete analysis of every material fact regarding any country, region, market, industry, investment or strategy.

All investments involve risks, including possible loss of principal. Foreign securities involve special risks, including currency fluctuations and economic and political uncertainties. Investments in emerging markets, of which frontier markets are a subset, involve heightened risks related to the same factors, in addition to those associated with these markets’ smaller size, lesser liquidity and lack of established legal, political, business and social frameworks to support securities markets. Because these frameworks are typically even less developed in frontier markets, as well as various factors including the increased potential for extreme price volatility, illiquidity, trade barriers and exchange controls, the risks associated with emerging markets are magnified in frontier markets.

In addition, smaller-company stocks have historically experienced more price volatility than larger-company stocks, especially over the short term. To the extent the fund focuses on particular countries, regions, industries, sectors or types of investment from time to time, it may be subject to greater risks of adverse developments in such areas of focus than a fund that invests in a wider variety of countries, regions, industries, sectors or investments. The fund’s risk considerations are discussed in the prospectus.

Investors should carefully consider a fund’s investment goals, risks, charges and expenses before investing. To obtain a summary prospectus and/or prospectus, which contains this and other information, talk to your financial advisor, call us at (800) DIAL BEN®/342-5236 or visit franklintempleton.com. Please carefully read a prospectus before you invest or send money.

1. Source: Bloomberg LP, as measured by the MSCI Russia Index. Past performance is no guarantee of future results. Indexes are unmanaged, and one cannot invest directly in an index. Book value is a company’s net asset value. It is calculated by subtracting intangible assets and liabilities from total assets.

6. Source: MSCI via FactSet Market Aggregates, as of 9/8/2014. MSCI makes no warranties and shall have no liability with respect to any MSCI data reproduced herein. No further redistribution or use is permitted. This report is not prepared or produced by MSCI.  Indexes are unmanaged, and one cannot directly invest in an index.

7. The price-to-earnings ratio, or P/E ratio, is an equity valuation multiple defined as market price per share divided by annual earnings per share.

8. Sources: S&P 500 via Factset Market Aggregates; MSCI Emerging Markets Index via Bloomberg LP. Data is for the three years ended 8/31/2014. MSCI makes no warranties and shall have no liability with respect to any MSCI data reproduced herein. No further redistribution or use is permitted. This report is not prepared or produced by MSCI.  Indexes are unmanaged, and one cannot invest directly in an index. Past performance is no guarantee of future results.

9. Source: Bloomberg LP, as measured by the Shanghai Composite Index. Indexes are unmanaged, and one cannot invest directly in an index. Past performance is no guarantee of future results.