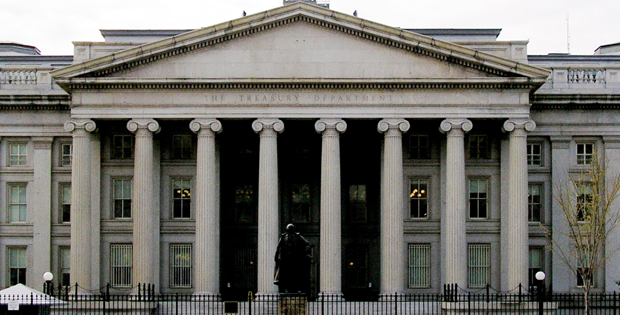 As the US economy continues to show signs of strength and the US Federal Reserve (Fed) continues to wind down its quantitative easing (QE) program, one would think the US Treasury markets would start reflecting a potential rise in inflation, and the eventuality of Fed monetary policy tightening. However, there has been a bit of disconnect in terms of behavior on the long end of the Treasury yield curve. Roger Bayston, senior vice president, Franklin Templeton Fixed Income Group®, breaks down why US 10-year Treasury note and 30-year bond yields aren’t ticking higher this year. He shares his view of the timing of possible Fed policy moves in light of economic data.

The current market consensus is for the Federal Reserve (Fed) to start raising its short-term benchmark interest rate (the federal funds rate) roughly in August of 2015. Our view is that if US economic growth continues at a more robust pace, and we see continued declines in the US unemployment rate, there’s a possibility we could see the Fed act even sooner than the market currently expects. We would expect gradual increases in the Fed funds rate once the Fed does start moving. If you believe the Treasury market should reflect economic activity and inflation rates, you can clearly see the disconnect amid the Fed’s ongoing quantitative easing (QE) programs. The 10-year Treasury note is currently yielding less than 2.5%,1 while real GDP in the second quarter of 2014 increased 4.6% (annual rate)2 and the market expectation for the third quarter is for an increase of 3% or better. Looking further out, the International Monetary Fund (IMF) recently raised its 2015 US GDP growth expectations to 3.1%3 while the Fed is a little less optimistic, with its latest forecast for growth of 2.6%–3% in 2015.4 Despite improvements in the economy, the shape of the Treasury yield curve has flattened since the start of the year. Longer-term Treasury rates have moved lower, while shorter rates have moved up, including Treasury notes along the two- to four-year part of the curve. 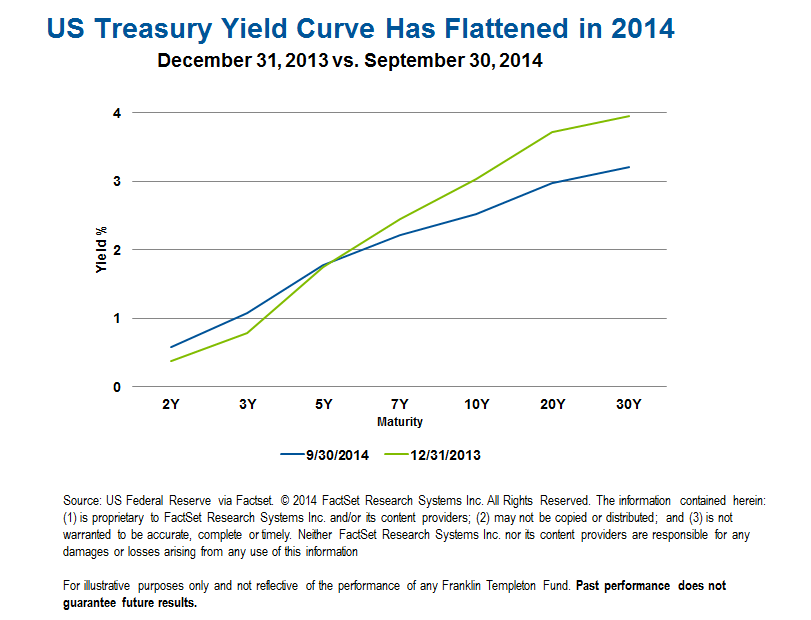 Positioning for the End of QE

The most recent Fed communications continue to allow for flexibility in terms of how policymakers will approach the end of QE. The market seems to be anticipating that at the end of the Federal Open Market Committee (FOMC) meeting on October 29, 2014, the Fed will likely announce it will stop adding mortgage-backed securities to its portfolio. The Fed will own about $1.7 trillion of agency mortgages when it is finished with these purchases, representing about a third of the outstanding fixed-rate mortgage market of about $5.7 trillion.5 The Fed’s massive purchase program effectively replaced the role Fannie Mae and Freddie Mac historically have played in mortgage finance. Even when the Fed stops adding to its portfolio, it will likely continue to reinvest principal paydowns from the underlying amortizing residential loans. This means the Fed will likely continue playing a significant role in the market as it may end up buying between $10–$15 billion per month as a result of these paydowns. If and when the Fed does change course and decides to stop reinvesting principal paydowns, it will take quite some time before the giant mortgage portfolio amortizes away at prepayment rates. The $1.7 trillion portfolio would be approximately half of its size in about seven years’ time, so that would likely play out sometime after the year 2020.

Fed officials have been quick to state they do not expect to sell agency mortgage-backed security assets into the market, but we live in unconventional times in terms of central bank monetary activities, and actions are being taken that have not been previously done. In light of this, agency mortgage-backed securities have generally moved just as we might expect; they have risen when we have seen small periods of concern develop in the overall credit markets and then have declined when the credit-sensitive markets have performed better. We expect the trend could continue.

At the moment, the Treasury market seems to be pricing in a lesser amount of tightening than the most current Fed “dots”—the graphical depiction of the forecasts of FOMC voting members for future Fed funds rates—depict. Fed officials are not generally experts at predicting forward economic activity; one would think that they might have a leg up in that pursuit, but that’s not necessarily the case. However, I do think it’s wise to pay attention to where they think short-term rates may go, as they do cast the actual votes on monetary policy actions.

When we analyze what we have heard from the Fed, along with the Franklin Templeton Fixed Income Group’s assessment of the economy, we see short-term rates as likely to adjust higher as we get closer to the time the Fed starts to act. The important issue for us is how that action translates into our strategies. For example, in our multi-sector strategies like Franklin Total Return Fund, we have had less interest rate exposure on the front part of the yield curve. [perfect_quotes id=”3784″]

I would like to touch on a topic that is currently on the minds of many investors—liquidity in the bond markets. As a result of both industry consolidation, as well as regulatory changes affecting the banking business, there are fewer bond dealers operating today than in the past, and the remaining dealers have reduced the capital they have committed to the bond-dealing business. Bond dealers have historically played a big role in matching buyers and sellers in the market, so the question has been posed about whether this is a great concern for bond investors, including us at Franklin Templeton. We do pay very close attention to these developments and would like to note some important points to bear in mind.

Baby boomers in the US have no doubt increased their allocations to fixed income as many have readjusted their portfolios heading into retirement. We have seen this not only in the retail funds business but in pension assets as well. Many private-defined benefit pension plans have moved to lock in their pension liabilities with matching long-duration, high-quality fixed income assets, leaving them less vulnerable to swings in asset markets. This is a source of demand for high-quality fixed income securities, and this may be a factor to consider when we think about shifting allocations between fixed income and other investment opportunities (in various asset classes) when this period of ultra-short low-interest rates changes.

Another factor to consider is how increased regulatory activity in banking and the de-risking of bank balance sheets has increased the amount of capital that banks are required to hold. Often this capital is in high-quality fixed income assets such as Treasury securities and agency mortgage-backed positions, and this is a trend that continues in Europe as well. On several occasions within the past couple of years, we have encountered market environments where sentiment has changed suddenly and large amounts of money have moved quickly. These situations have not caused major disruptions in terms of liquidity. A change in the credit cycle sentiment would be an important consideration to ponder, but a measured look at market shocks and changes in sentiment in the past couple of years seems to imply that the market has been able to find its source of liquidity.

Roger Bayston’s comments, opinions and analyses are for informational purposes only and should not be considered individual investment advice or recommendations to invest in any security or to adopt any investment strategy. Because market and economic conditions are subject to rapid change, comments, opinions and analyses are rendered as of the date of the posting and may change without notice. The material is not intended as a complete analysis of every material fact regarding any country, region, market, industry, investment or strategy.

All investments involve risks, including possible loss of principal. Interest rate movements and mortgage prepayments will affect the fund’s share price and yield. Bond prices generally move in the opposite direction of interest rates. Thus, as the prices of bonds in the fund adjust to a rise in interest rates, the fund’s share price may decline. Changes in the financial strength of a bond issuer or in a bond’s credit rating may affect its value. The risks associated with higher-yielding, lower-rated securities (commonly called junk bonds) include higher risk of default and loss of principal. Investment in foreign securities also involves special risks, including currency fluctuations, and political and economic uncertainty. Derivatives, including currency management strategies, involve costs and can create economic leverage in the portfolio which may result in significant volatility and cause the fund to participate in losses (as well as enable gains) on an amount that exceeds the fund’s initial investment. The fund may not achieve the anticipated benefits, and may realize losses when a counterparty fails to perform as promised. These and other risks are described more fully in the fund’s prospectus.

5. Source: US Federal Reserve, Securities Industry and Financial Markets Association, as of June 2014.