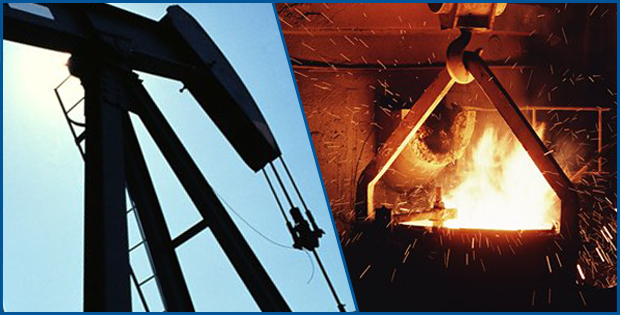 This spring, to the chagrin of consumers and the delight of energy companies, oil prices took some strides toward recovery after a precipitous collapse that began in June 2014. Maarten Bloemen, executive vice president and portfolio manager, Templeton Global Equity Group, discusses why, based on the supply and demand dynamics at play in the market, he believes that recovery trend is likely to continue. Meanwhile, Tucker Scott, executive vice president, portfolio manager, Templeton Global Equity Group, contrasts oil’s supply versus demand battle with that of iron ore and offers his take on whether the depressed prices of the important steel-making mineral will recover.

We were encouraged to see the price of crude oil stabilize somewhat during the first quarter of 2015 after declining approximately 60% from June 2014 to January 2015 to under $50 per barrel. Looking over the longer term, as we do at Templeton Global Equity Group, we don’t see how the price of oil is sustainable even at the $60-per-barrel level it has reached recently. I can offer several reasons why I believe that is the case, but they boil down to the classic battle of supply versus demand.

In our view, while the US shale revolution has created a perception that the world is awash with oil, supply/demand imbalances are likely to prove only temporary. US shale producers have responded very quickly to the sudden sharp drop in oil prices, by cutting budgets an average of about 35%.1 Shale producers also have decreased their rig count, which is now at a new low, some 44% below its peak.2 New permits to drill also have fallen, which leads us to believe we are seeing the very early phases of a slowdown in production. Early signs, yes, but they’re something to watch. 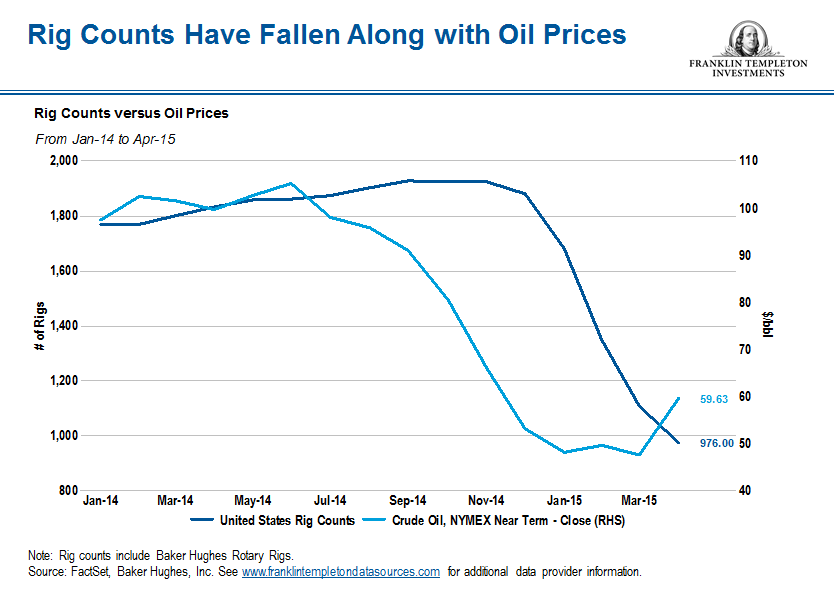 Additionally, decline rates for shale wells, which measure when production levels start to fall off, are five to 10 times the decline rates for conventional wells on average, which gives existing US shale assets a relatively short lifespan.

Outside of US shale, new reserves have been scarce and mostly limited to regions that are too remote to be economical, or too politically unstable to be dependable. We further believe this underscores the longer-term challenges on the supply side. In our view, the industry will need to find and replace a substantial amount of oil to satisfy estimated demand, which I think will continue to rise.

A large amount of oil still needs to be discovered and developed to bridge the gap between the existing base production, which falls off due to yearly consumption and a natural decline of oilfields globally, and expected demand. Energy companies, in general, found it difficult to replace oil fund exploration and development to secure new sources of oil at the $100-per-barrel oil price we’d seen prior to last year’s price plunge. It appears unlikely in the longer term that they will be able to replace it at the current lower prices. Though costs have come down in the last year due to relatively low inflation rates and cuts in capital expenditures, our analysis indicates that prices would likely have to be in the $75–$80-per-barrel range to replace reserves and grow production to meet expected global demand in the future.

We believe development in emerging markets will be the key global driver of oil demand growth. While our expectations aren’t overly ebullient, it’s worth noting that China has been under-consuming oil relative to its share of global gross domestic product, most likely necessitating a decent pace of new oil discoveries and development just to keep up with potential future demand. 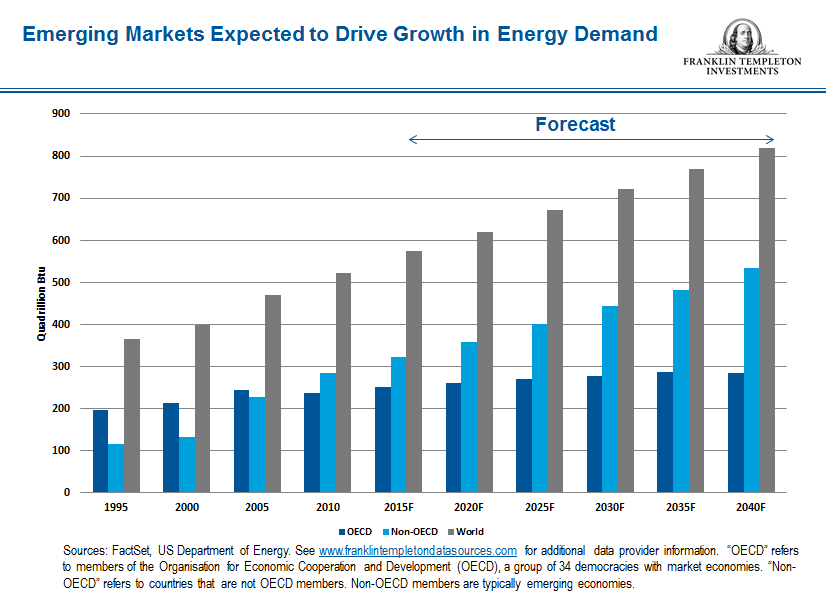 As transportation costs have dropped, we have seen demand pick up. Driving miles in the United States, for example, have increased from October 2014 to March 2015,3 and we have also seen the early signs of rising demand from China and India.

Overall, the picture today looks much more positive to us than during the last major oil shock in the 1980s. At that time, a massive demand contraction coincided with an upsurge in supply from producers that are not members of the Organization of the Petroleum Exporting Countries (OPEC) after a 20-fold rise in oil prices; now, demand growth remains healthy, if modest, and supply constraints have been increasing following the major plunge in price.

While we think oil markets will likely remain volatile, and could potentially drop lower in the short term, we continue to see significant potential for further upside over our long-term investment horizon. Our energy researchers have stepped back and undertaken rigorous analysis on a sector basis, as well as on a stock-by-stock basis, and concluded that short-term oil prices had possibly dropped further than what long-term fundamentals may have dictated. In response, we have been more interested in the energy sector recently, taking advantage of lower prices to buy what we consider to be undervalued stocks. We believe we are well positioned to ride out the short-term lower prices and are poised to benefit from the higher oil price we expect to see in the future.

Over the last year, iron ore prices have followed the trajectory of oil prices, plunging from $100 to $50 (per ton) in April.4 Prices have rebounded somewhat since then, and are now hovering near $60.5  While oil has dealt with a relatively recent increase in supply, iron ore has been experiencing a long-term glut. And, based on our analysis of future supply/demand trends, we expect the abundance of iron to continue—and possibly increase. Because of the size of its market, iron ore is often viewed as the commodities industry’s bellwether metal.

The expansion in iron ore that we have witnessed over the last five years or so, especially in Australia and Brazil, has been unprecedented. Iron ore was priced at about $20 per ton at the beginning of the 2000s. The price rose gradually with the advance of China’s economy, peaking in 2011 at about $170 per ton. When iron ore reached $160 per ton in 2010–2011, management at large mining companies all seemed to decide to expand capacity at the same time. We compare it to a game of chicken, where each company thought the others would blink and decide to curtail their expansion plans. But, in fact, nobody blinked and a tremendous amount of iron ore came online. We think, in isolation, each of the leading mining companies probably had a sound case for expanding. When taken together, however, they failed to anticipate the potential impact their actions would have on supply.

Given this expansion in iron ore production, supply is expected to increase by approximately 40% from 2014–2018.6 And the additional capacity is coming on line just as demand appears to be flattening. China, which accounts for 71% of worldwide demand of iron ore,7 announced in March that it intends to cut its production of steel, which is made from iron ore, by 10%. Additionally, China’s GDP growth rate is expected to slow to 7% in 2015,8 which suggests that demand for iron ore going forward will not be as strong as producers had expected.

Demand for iron ore has also been weakened by a rise in scrap supply, which is a phenomenon oil doesn’t have to contend with; once gasoline is consumed it’s burned and gone forever. Steel, on the other hand, can be recycled and become another feedstock that can be used to make more steel. About 75% of US steel production comes from scrap supply, while only about 17% of China’s production does.9 Over the next 15 years, we believe China’s scrap-use percentage is likely to double, which could create another headwind against the demand-growth potential for iron ore.

Maarten Bloemen’s and Tucker Scott’s comments, opinions and analyses are for informational purposes only and should not be considered individual investment advice or recommendations to invest in any security or to adopt any investment strategy. Because market and economic conditions are subject to rapid change, comments, opinions and analyses are rendered as of the date of the posting and may change without notice. The material is not intended as a complete analysis of every material fact regarding any country, region, market, industry, investment or strategy.

6. Source: Trading Strategy Commodity Report, Handelsbanken Capital Markets, 5/13/2014. There is no assurance that any forecast will be realized.