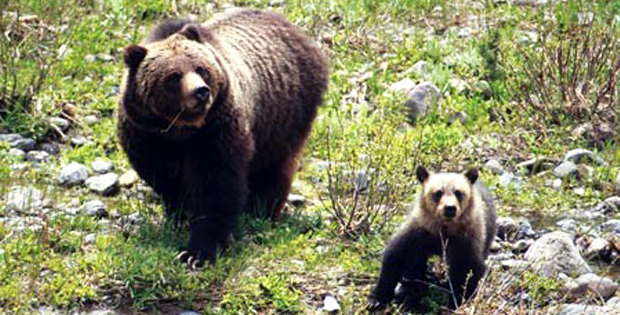 In the eyes of many observers, the eurozone is enjoying a “Goldilocks” moment: Conditions are “just right” for growth. David Zahn, head of European Fixed Income, Franklin Templeton Fixed Income Group, agrees. Just like Goldilocks, the eurozone is having to contend with bears; not the porridge-eating inhabitants of the woods, but rather commentators casting doubts about the European Central Bank’s commitment to its quantitative easing program, or pointing to new data suggesting the European powerhouse of Germany is not as impressive as it once was. Despite the naysayers helping to fuel a recent selloff in the European bond market, Zahn believes there are reasons to be optimistic that the eurozone can keep one step ahead of the bears. Here’s why.

The eurozone—the 19 European countries that share the euro as a common currency—is currently offering what we would regard as an ideal environment to generate growth, so we’d certainly be slightly concerned if the economy there was not growing.

Many aspects are working in favor of eurozone growth: Oil prices are significantly lower than they were a year ago, and that’s proving supportive of European economies; at the same time, the euro is significantly lower than it was a year ago, and that seems to be spurring exporters; meanwhile, the European Central Bank’s (ECB) quantitative easing (QE) program is underway, and the ECB seems determined to prove it’s serious about sticking with that.

Still, we feel that the region is not likely to enjoy the “add-on” effect on growth year after year, especially now that oil prices seem to be showing signs of stabilization and the euro appears to be getting closer to the end of its selloff. We don’t think there’s any great slowdown coming in the eurozone, but we do recognize that growth in Europe has been particularly strong in recent months and we would expect to see that rate of growth start to fade, probably at some point later this year. 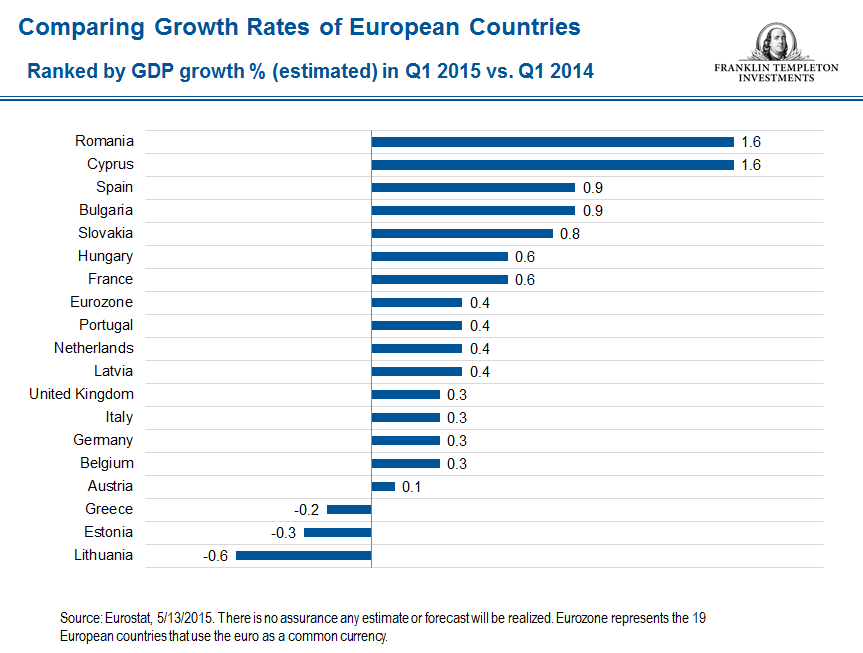 One reason we think growth might slow is that Germany, the traditional engine of eurozone growth, is not growing as strongly as most observers would have hoped, especially compared with other economies in the region that have faced headwinds in the past and are now doing better.

In many cases, it is those countries that have implemented fundamental reforms that are enjoying stronger growth: Italy, for example, has turned around its structural budget deficit into a structural budget surplus and now appears to have exited its recession. Spain, too, has reformed its labor market somewhat and also now seems to have its budget deficit under control. Its economy has been growing more strongly in recent months.

However, there’s always more to do because, in the minds of many observers, one of the biggest challenges both Italy and Spain face is unemployment. We feel the two countries probably haven’t done enough yet in terms of freeing up the labor market, but we think that will likely come with time. Other countries have considered reforms that have been put on the back burner, in some cases because of growth and low interest rates.

In our view, against this generally positive background and with the QE program underway, European bonds, especially in the so-called periphery—the more heavily indebted and less wealthy members of the eurozone—offer good value at current yield levels. We feel the core offers less value, but more than it did in April.

In April and May the European bond market saw a significant selloff, but rather than signaling any dramatic change in the underlying fundamentals of the eurozone, we think it reflects more the technical and positioning considerations of some investors. The trigger for the selloff appears to have been the low yields that the European bond market experienced back in mid-April. However, a more objective look at the data reveals that European yields now are relatively unchanged from their levels at the beginning of the year; some are a little higher, some a little lower, but in general there’s no significant change. So, we would say that there is no reason to be less positive about European fixed income prospects now than in the first quarter.

An important factor in our outlook on the eurozone is the robust attitude of the ECB to its QE program. The ECB has made it clear that it intends to pursue its program of asset purchases under the QE umbrella until September 2016, and possibly longer if required.

Several commentators have discussed whether the ECB might consider curtailing its QE program, but based on recent comments from ECB President Mario Draghi and other members of the bank’s governing council, we think there would be very little chance of the bank curtailing the program, unless the economic data were to change dramatically. If the data doesn’t change dramatically, we think the program is likely to continue until September next year and potentially beyond. It’s interesting to also consider that the European bond market’s recent volatility allows active portfolio managers like us to seek to take advantage of opportunities.

It seems to us entirely possible that markets in Europe could remain slightly more volatile—at least in the short term—and that’s when we think active management comes into its own because it allows managers to pursue potential opportunities that might not feature in indexes. We also seek to actively manage currency risk in conjunction with our investments in Europe, and we believe having the ability to allocate between different countries when we see it to be the right time can add significant value.

All investments involve risks, including the possible loss of principal. Bond prices generally move in the opposite direction of interest rates. Thus, as prices of bonds in an investment portfolio adjust to a rise in interest rates, the value of the portfolio may decline. Special risks are associated with foreign investing, including currency rate fluctuations, economic instability and political developments. Investments in developing markets involve heightened risks related to the same factors, in addition to risks associated with these markets’ smaller size, lesser liquidity and the potential lack of established legal, political, business and social frameworks to support securities markets. Currency rates may fluctuate significantly over short periods of time, and can reduce returns. In an actively managed investment portfolio, there is no guarantee that the investment techniques and risk analyses applied by the investment manager will produce the desired results.