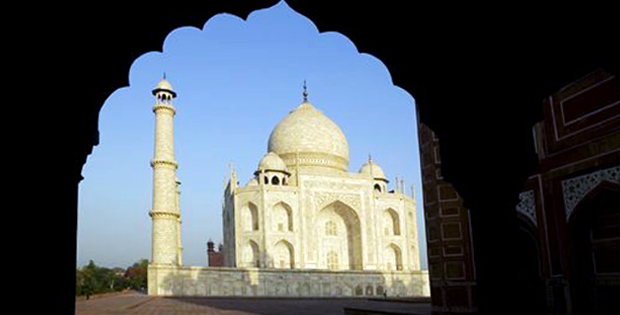 As two of the most significant economies driving global growth today, commentators often compare the emerging market behemoths of China and India. In most recent times, both India and China have eclipsed their BRIC counterparts—a term encompassing the emerging markets of Brazil, Russia, India and China—in terms of economic growth. However, there is significant differentiation between the Indian and Chinese economies.

China’s economic growth is at a more mature level, and it faces more challenges in terms of demographics and capital productivity. The Chinese economy currently contends with rebalancing its economy, addressing industry overcapacity, as well as reducing corporate leverage and overall debt, whereas India is significantly behind in terms of economy development and stands to benefit from the “catch-up” in economic growth. This differentiation leads us to be more positive about the Indian trajectory of economic growth relative to China.

India is significantly behind China in terms of development metrics like GDP per capita and urbanization. This implies to us that its economy stands to benefit from the achievement of “low hanging fruit” policy initiatives. Moreover, India may benefit from structural drivers of growth; over the next decade, India is expected to add over 110 million workers aged 15 to 64 to its workforce,1 while the declining dependency ratio2 is another indicator of the country’s expanding working-age population. The lower the ratio, the more workers the economy has, which generally supports economic growth if the labor market has enough job openings available. Meanwhile, India’s growing middle class is projected to contribute US$1,741.7 billion to the economy by 2020, creating a more consumer-led economy.3 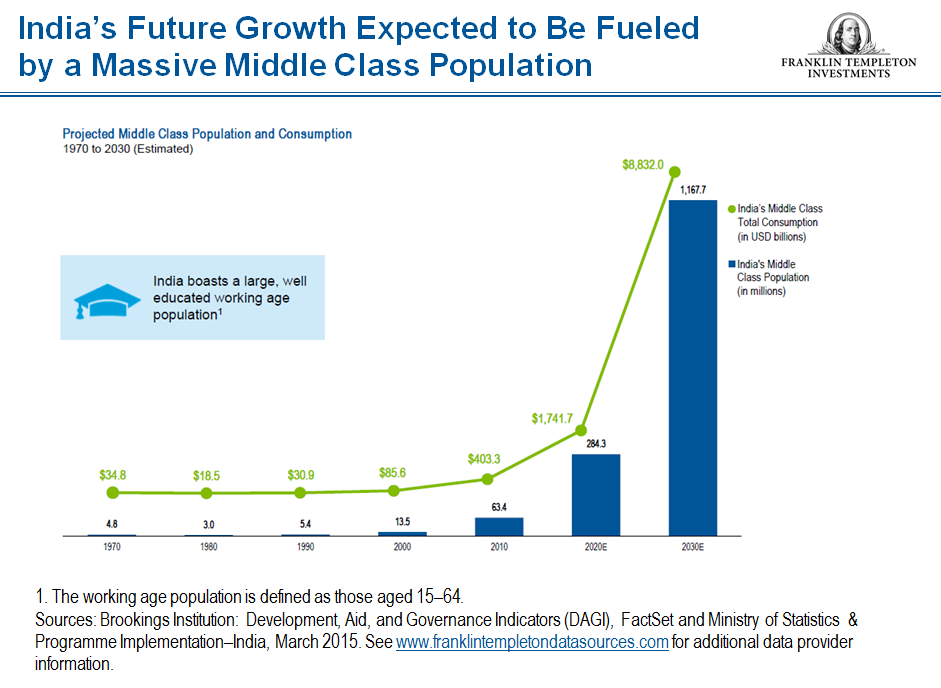 India also has additional scope for further economic growth on the back of labor productivity, better education and urbanization. A combination of a growing middle class and increased commercialization of the rural sector (and ultimately infrastructure) could potentially set the stage for increased urbanization in years to come. While job growth in major metropolitan centers has slowed down, their peripheries have increased by almost 12%,4 but, at least according to the World Bank, more can be done to tap into the unrealized potential of cities in South Asia, where the population is expected to grow by almost 250 million in the next 15 years.5

India’s domestic-led model, which to us has been its advantage for quite some time, means the increasing commercialization of the rural sector and infrastructure development can push the economy forward. India’s rural economy is at the heart of the government’s economic approach and is one of the main focuses of the 2016-17 Union Budget. While it will likely remain a focus for investors too, it’s important to remember that the rural economy can be vulnerable to non-economic influences, such as patchy monsoon rains.

The above factors are coupled with the fact that India has little household debt and, in our view, a decreased likelihood of inflation, so we believe India’s favorable demographics can sustain rapid growth without the risk of overheating the economy. The International Monetary Fund (IMF) projects India’s gross domestic product (GDP) growth at 7.5% in both 2016 and 2017, ahead of its projections of 6.3% and 6%, respectively, for China.6 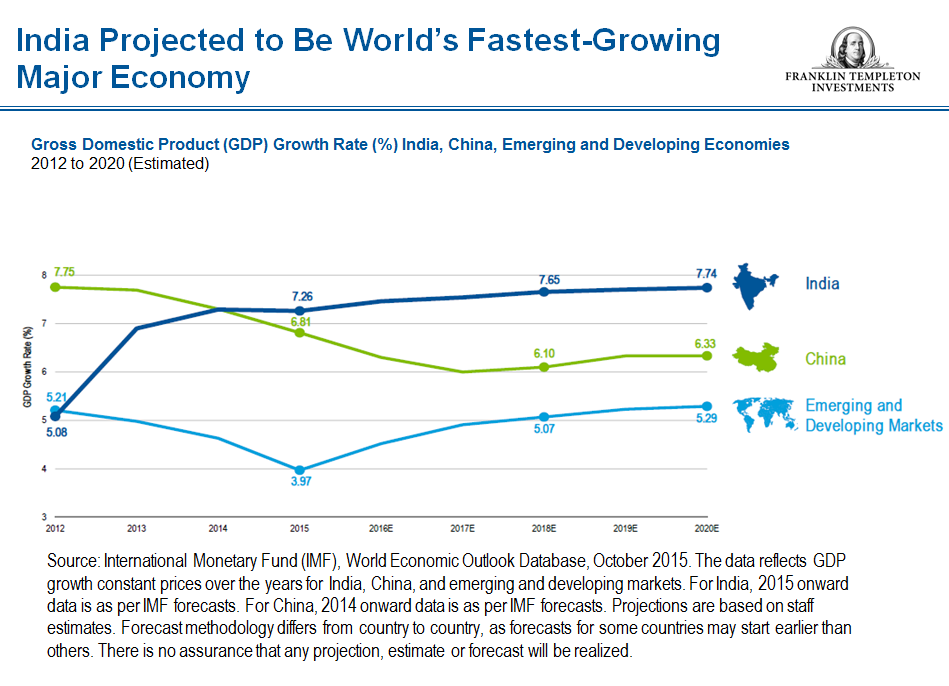 In the short-term, India’s economy could be impacted by global forces like China’s growth slowdown and market volatility. Stock markets around the world faced a rough patch at the beginning of 2016 as equity prices slumped, and the Indian stock market was no exception to the global selloff. However, we believe that the domestically driven growth drivers mean that India is well placed to ride-out global challenges ahead. As long-term investors, we think that the prevalence of these growth drivers will sustain the outperformance of the Indian market relative to peers.

Cyclically, we believe India has seen the worst of a prolonged slowdown. We expect improving growth potential due to cyclical recovery and capital expenditure cycle pick-up, driven by infrastructure spending and urban consumption and helped by an accommodating rate environment due to successful reining in of inflation. Inflation is subsiding and the current account balance is improving due to lower oil and commodity prices, whereas declining interest rates are reducing the cost of capital for companies. As such, we expect a recovery in corporate earnings led by both top-line growth and margin expansion. For the above reasons, we anticipate corporate earnings growth in India to be higher on a sustainable basis, while we believe China requires stronger realignments in order for earnings growth to pick back up.

Even though market valuations are near their historical long-term averages, in our view, market valuations are reasonable when adjusted for cyclicality and earnings quality. However, we expect price readjustments for certain overvalued stocks, and therefore reiterate the importance of bottom-up stock selection based on growth, profitability and sustainability. 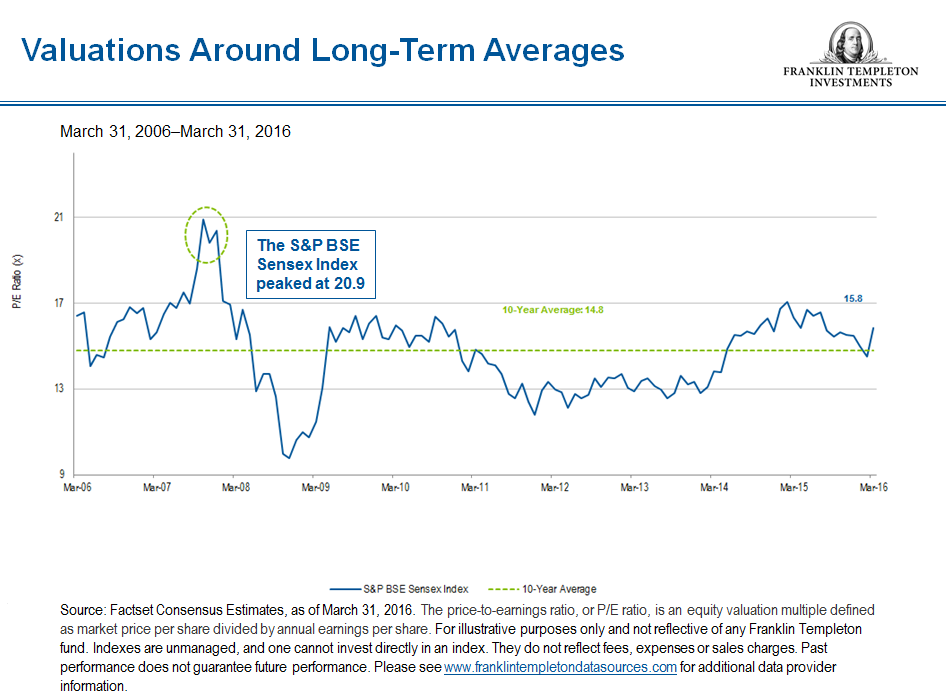 2. The dependency ratio reflects the number of people of non-working age compared to those of working age.