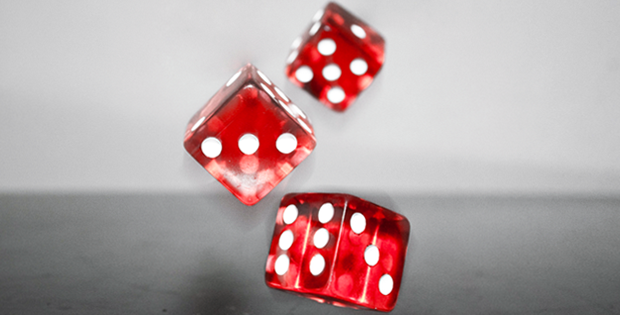 For years, European equity investors seem to have used the banking sector as a scapegoat for their financial fears by selling off bank shares at the first hint of any bad economic news. Now the sector is facing what many believe is a trifecta of troubles: energy-company weakness, increased regulations and negative interest rates. While addressing investors’ concerns, Templeton Global Equity Group’s Cindy Sweeting and Peter Wilmshurst provide an alternate view on the trio of worries—and reveal what they consider to be two bright spots for the sector.

Investors appear to have completely lost confidence in European banks, and they have shown their disdain so far this year in the same way they have since the 2008-2009 financial crisis: When they hear a shred of negative economic news, they sell off the banking sector. Bank stocks have dropped 20% year-to-date,1 compared with European equities overall, which have slid a comparatively modest 4% during the same time frame.2

The malaise has dragged down the banking sector’s price-to-book (p/b) ratio3 toward lows it reached during the financial and European sovereign crises. And at 0.7, the sector’s p/b ratio is less than half its long-term average of 1.6.4 In our view, the banking sector is trading at extremely attractive levels, and we believe select banking and financial franchises have become excessively discounted, particularly taking into account what we consider bright spots on the horizon, which include a pickup in loan activity and increased dividend payouts. 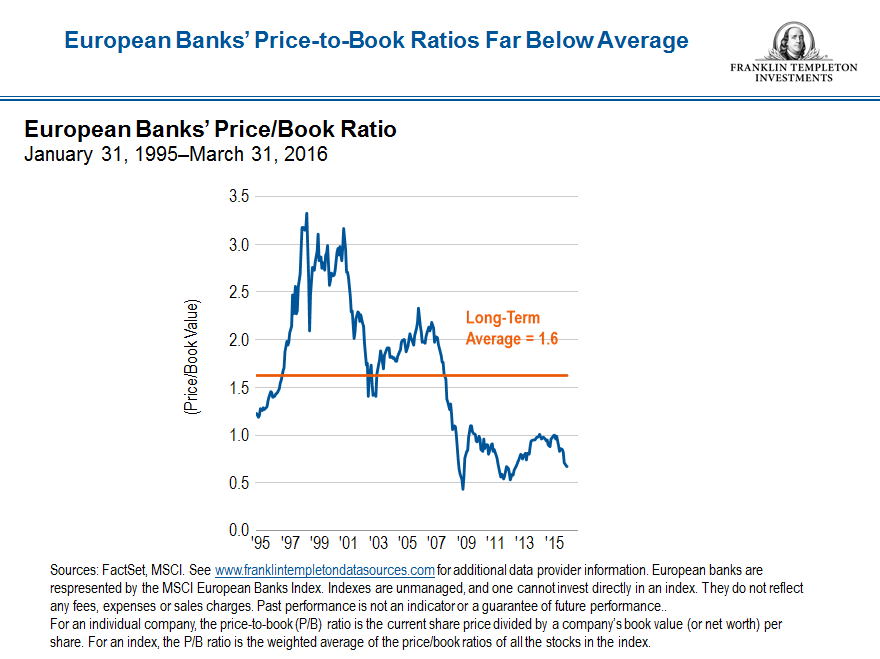 What has stoked investor worries so far this year? The list features what we call the “triple whammy”: energy-company weakness, regulatory concerns and, perhaps most worrisome, negative interest rates.

Investors are worried that the negative interest rates brought about by European Central Bank (ECB) policy will hurt banks’ profitability. Banks typically make most of their money on the spread between the rate of interest they pay depositors and and the one they charge borrowers. This spread has narrowed as interest rates have fallen, because loans have become cheaper while banks have been reluctant to cut rates on deposits below zero, although this is now being selectively implemented in some countries, for some clients.

The ECB has become mindful of the banks’ profitability problem in recent months. Granted, the ECB further decreased interest rates during the first quarter, but it didn’t lower them as far as the market had anticipated because, according to various ECB authorities, the ECB was worried about the effects on banks’ profits. Those concerns also led the ECB to introduce a second targeted longer-term refinancing operation. This program, which starts in June, will allow banks to refinance up to 30% of their non-mortgage lending to companies and households at a cost of negative 40 basis points, so banks essentially will be paid to borrow from the ECB to lend those funds to their customers.

European banks also have tried to boost their balance sheets by repricing loans, reassessing fee and commission schedules, decreasing their cost of deposits as well as refinancing wholesale funding, some of which was borrowed during the financial crisis at much higher costs. Banks are also cutting their branch networks and reducing staff levels.

We should also mention that there is an offset, to some degree, of lower interest rates by helping to keep loan-loss provisions lower as the costs of the loans themselves are cheaper. In Europe, we are yet to see loan-loss provisions decline to what we think would be a mid-cycle rate, as the economies in certain countries have continued to lag.

Concerns that energy companies’ financial woes would spill over on to banks’ financial statements have also weighed on the sector. However, in our view, these worries have been overstated. The top European banks have about 3% of their loans dedicated to the energy sector.5 And the biggest lending segment within the energy sector is to a combination of large integrated oil companies—most of which have strong balance sheets—and trade finance, which is both short term and collateralized with oil in the shipping process. We would not expect to see high loan losses in these areas of the business, even in a very severe economic environment.

Additionally, according to Moody’s Investors Service, none of the top European banks have greater than 50% exposure to sub-investment-grade credits in energy.6 On average, about two-thirds of their energy lending is to investment-grade credits, even after the reduction in credit ratings that we have seen in recent years. Although we expect banks will likely have to raise their loan-loss provisions for energy borrowers in the near term, we don’t believe it will significantly crimp their bottom lines.

In addition to concerns about energy and interest rates, the specter of further regulatory tightening has continued to rear its head. It’s been a long road for the sector in dealing with new regulations after the financial crisis, and recent talk about further regulatory headwinds has pressured the banking sector so far this year. Banks are working on becoming compliant with Basel III guidelines that intend to strengthen bank capital requirements while also increasing liquidity and decreasing leverage.

We believe regulators are increasingly recognizing the banks’ pivotal role in the European economy and that ongoing changes to regulation make it harder for banks to operate and support economic growth. We have seen encouraging announcements over the last couple of months suggesting that the level of banking capital is sufficient for the sector as a whole, and that we will see fewer regulatory changes as we get towards the end of 2016.

We are also encouraged by the improving pace of lending in the region. European bank lending is growing again, inching into positive territory for corporates, with households now growing at just under 2%.7 We consider those increases a key positive for the banking sector and the overall economy as well. 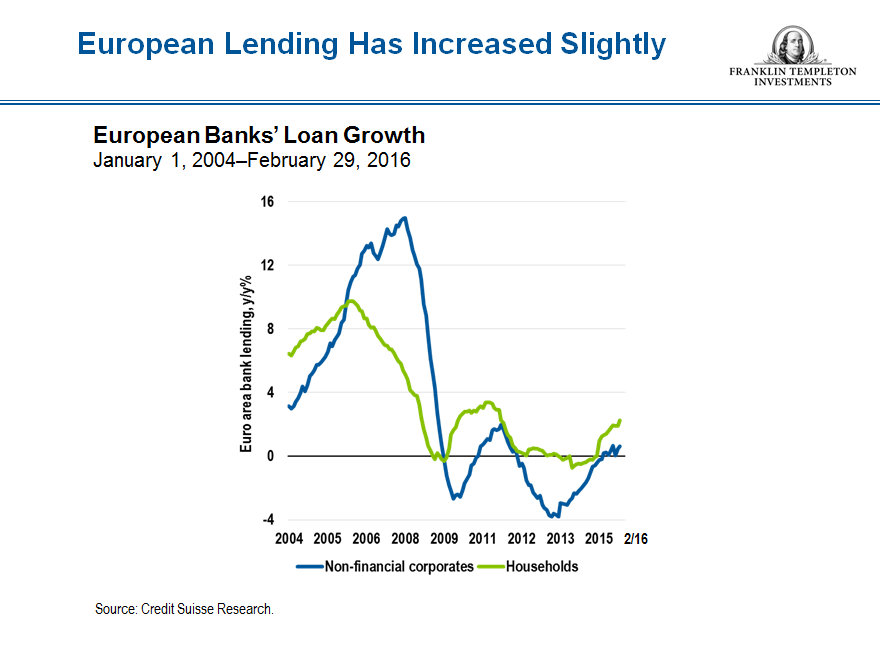 We believe as banks’ capital gets to its target level and as profitability recovers, banks can still turn into strong dividend payers, and we have already started to see that trend arise. The three largest French banks, for example, increased their dividends per share by 50%–70% in 2015.8 The consensus yield for European banks in 2016 is 5.7%;9 in a region where interest rates are close to zero, a 5% dividend yield is quite attractive, in our view. And that dividend yield is on a payout ratio of 52%,10 so a little more than half of the banks’ earnings are expected to be distributed to shareholders, which shows there’s room for dividends to potentially increase further.

The comments, opinions and analyses are the personal views expressed by the investment managers and are intended to be for informational purposes and general interest only and should not be construed as individual investment advice or a recommendation or solicitation to buy, sell or hold any security or to adopt any investment strategy. It does not constitute legal or tax advice. The information provided in this material is rendered as at publication date and may change without notice, and it is not intended as a complete analysis of every material fact regarding any country, region market or investment.

All investments involve risks, including possible loss of principal. Special risks are associated with foreign investing, including currency fluctuations, economic instability and political developments; investments in emerging markets involve heightened risks related to the same factors. To the extent a portfolio focuses on particular countries, regions, industries, sectors or types of investment from time to time, it may be subject to greater risks of adverse developments in such areas of focus than a portfolio that invests in a wider variety of countries, regions, industries, sectors or investments.

1. Source: STOXX Ltd., as of May 16, 2016. European banking stocks are represented by the STOXX Europe 600 Banks Index. Indexes are unmanaged, and one cannot invest directly in an index. They do not reflect any fees, expenses or sales charges. Past performance is not an indicator or a guarantee of future performance.

2. Source: STOXX Ltd., as of May 16, 2016. The overall European equity market is represented by the STOXX Europe 600 Index. Indexes are unmanaged, and one cannot invest directly in an index. They do not reflect any fees, expenses or sales charges. Past performance is not an indicator or a guarantee of future performance.

3. The price-to-book (P/B) ratio is calculated by dividing the current closing price of a stock by its book value for the most recent quarter-end. For an individual company, the price-to-book (P/B) ratio is the current share price divided by a company’s book value (or net worth) per share. For an index, the P/B ratio is the weighted average of the price/book ratios of all the stocks in the index.