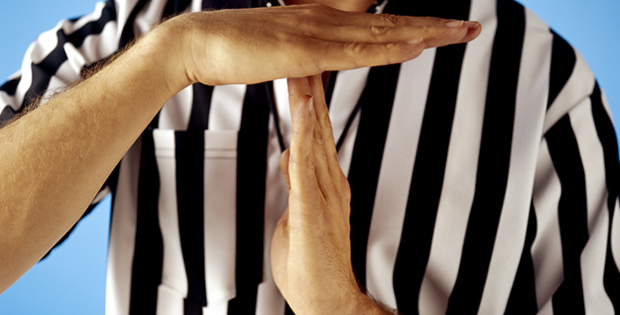 The US Federal Reserve (Fed) decided not to raise interest rates at its September policy meeting, even though some market observers would argue there were plenty of reasons to do so. Here, we share a quick take on the situation from Templeton Global Macro CIO Michael Hasenstab, who feels the Fed’s lack of action risks putting it behind the curve when it comes to inflation, and Templeton Emerging Markets Group Executive Chairman Mark Mobius, who says emerging markets can weather a Fed rate hike when it does come.

The longer the US Federal Reserve (Fed) does not raise interest rates, the greater it risks falling behind the curve, in our view. The United States is currently near full employment, a condition that we think would justify rate normalization, yet the Fed has taken no action. A number of observers have stated that sluggish US (and global) economic growth is good reason for the Fed not to raise rates, but we would argue that monetary policy alone cannot engineer growth, nor is it the Fed’s role. Instead, the Fed should be focused on its dual mandate of maximizing employment and maintaining price stability.

If the United States is actually experiencing a “new normal” where growth remains lower long term, then the Fed risks fueling real or asset-price inflation by being too lax with monetary policy going forward. At each policy meeting, the Fed has found excuses not to hike interest rates, often citing various economic challenges around the globe. Fortunately for the Fed, it currently benefits from global liquidity that is pushing down interest rates, allowing it to remain on hold with rates for longer. Financial repression is driving some investors to buy US Treasuries, which creates an artificial bid. However, if we see headline inflation rise to 3%, along with full employment and the economy growing at its full potential, we think many investors are going to question why they are buying a US 10-year bond at 1.6%-1.7%, which is offering a negative real yield.

Thus, we have continued to avoid interest-rate risks, particularly in US Treasuries. We do not want to bet that foreign investors will want to continue funding US deficits. It is our belief that the United States is likely to see expansionary fiscal policy next year, and if you combine that with expansionary monetary policy (assuming the Fed remains on hold), it could be a toxic mix in terms of inflation dynamics. We think investors are taking on significant risks in betting that this multi-decade Treasury rally can repeat itself.

You can read more of the team’s views on inflation in Global Macro Shifts: “Inflation: Dead, or Just Forgotten?”

Emerging markets have seen an improvement in investor confidence in recent months, despite rising expectations of a near-term rate hike by the Fed this year. While the Fed decided to remain on hold at its September policy meeting, other central banks around the globe remained supportive and in easing mode.

We think the dovish policy stance by the European Central Bank, Bank of Japan and others bodes positively for emerging markets’ growth and assets. At the same time, the Fed has been very cautious in terms of tightening this year. We think emerging markets should be able to weather small and gradual increases in US interest rates, which seems to be the path Fed policymakers have indicated. A much faster or more aggressive increase in US interest rates would likely have greater ramifications that could travel around the world.

It remains to be seen if potential Fed tightening triggers a reaction by other central banks in other major markets. But in terms of the global economic impact, if other major global central banks hold fast to their easing policies and perhaps even accelerate them, we think those actions could offset the impact of future Fed tightening. In addition, many emerging-market countries are making meaningful progress on structural reforms to stimulate growth (which is helping boost their respective stock markets), which we think bodes well for their long-term prospects.

It is important to note that higher interest rates do not automatically lead to equity market declines. There are many instances in the past where emerging-market equities continued to rise even in a rising-rate environment, as you can see in the chart below. We must keep in mind that there are a number of complex factors that impact markets, and interest rates are only one of them. 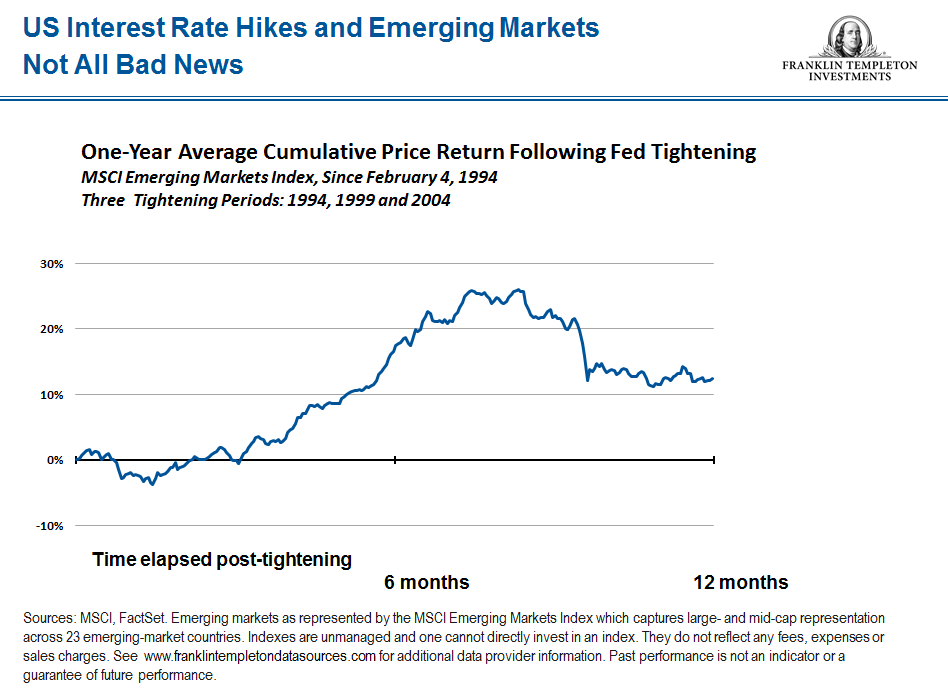 All investments involve risks, including possible loss of principal. Stock prices fluctuate, sometimes rapidly and dramatically, due to factors affecting individual companies, particular industries or sectors, or general market conditions. Bond prices generally move in the opposite direction of interest rates. Thus, as prices of bonds in an investment portfolio adjust to a rise in interest rates, the value of the portfolio may decline. Special risks are associated with foreign investing, including currency fluctuations, economic instability and political developments. Investments in emerging markets involve heightened risks related to the same factors, in addition to those associated with these markets’ smaller size, lesser liquidity and lack of established legal, political, business and social frameworks to support securities markets.