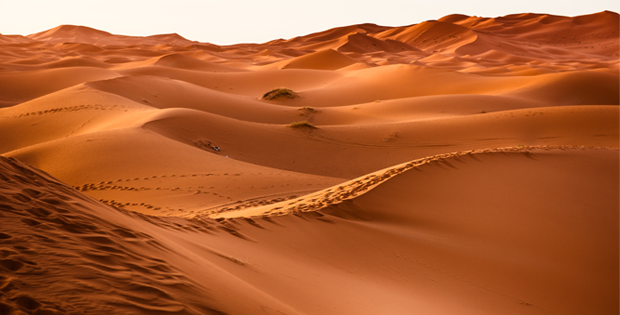 “It is not often that a man can make opportunities for himself. But he can put himself in such shape that when or if the opportunities come, he is ready.”  – Theodore Roosevelt

Apparently we can learn a lot from sand piles.

Some years ago three physicists studying at the Brookhaven National Laboratory on Long Island, New York, developed a computer program that would “build” virtual piles of sand. Their goal was to observe and learn about the behavior of so-called “non-equilibrium” systems—that is the many complex and unpredictable schemes that surround and interact with us every day. Things like weather patterns, ecological systems, global markets, ocean currents, etc.

The program was designed to build each sand pile in a deliberate and methodical fashion, stacking one grain at a time and then observing the results.

One might assume some sort of pattern-like behavior would have emerged, i.e. a typical size or average number of grains would increase the likelihood of a change or collapse in a given sand pile.

But this was not the case.

On the contrary, each time the experiment was run the results were completely unpredictable. After thousands of tests—with millions of grains of sand—they observed no patterns, no typical number required to trigger a system collapse. Sometimes it was a single grain, others 10, 100, or 5,000 grains.

Still others involved massive mountains of sand incorporating millions of grains that would collapse in a single and seemingly random onset of failure.

In other words, literally anything, at any time, might occur. This kind of stuff sticks with me when I think of the markets—and positioning portfolios.

In an attempt to gain some insight into the cause of such unpredictability in their sand-pile game (or in an effort to assign some order to the disorder they observed) the scientists pushed the experiment further.

They then looked at the virtual sand pile from above, and they color coded its regions according to steepness, with relatively flat areas green and steeper sections red.

In the beginning, the piles were mostly green of course (though they would still shift and collapse periodically), but as the experiment progressed and some of the piles grew, more red areas would infiltrate.

For the largest piles, a dense skeleton of red spots coursed throughout. They called these patterns “fingers of instability.” Now the physicists had some insight into the peculiar behavior of their piles.

What they could observe is that the greater the number of interconnected red spots in the pile—or fingers—the greater the intensity of a systemic collapse.

If the red network was sparse and all trouble spots were well isolated, then a single grain would likely have only limited repercussions, if any (again the triggering was random). But as the red spots began to grow and interconnect, the impact of the next grain could become fiendish. Sometimes it fell innocuously and did nothing, sometimes a few grains tumbled.

Every so often, however, if the network of red trouble spots was thick, a cataclysmic reaction would result, sending walls of sand cascading in dramatic fashion.

The lesson I take from the sand-pile experiment is that while we cannot predict what grain of sand may trigger a response, we can imagine the potential size and scope of any disruption by looking for steepness and interconnectedness of its fingers.

In my estimation, the fingers of global markets today are both steep and interconnected—like a map of Mt. Everest contrasted against the Mekong Delta.

I am not suggesting we are on the verge of imminent crisis, nor am I calling for a market top. Frankly, who would know? Predictions are a fool’s errand.

For me, it is about preparing for incipient shocks smartly and strategically; it is about being vigilant.

What I do know, what I am 100% certain of, is that the markets will correct eventually.

The Dow Jones Industrial Average rose 14 days in a row through March 1, something it had not done since 1987. 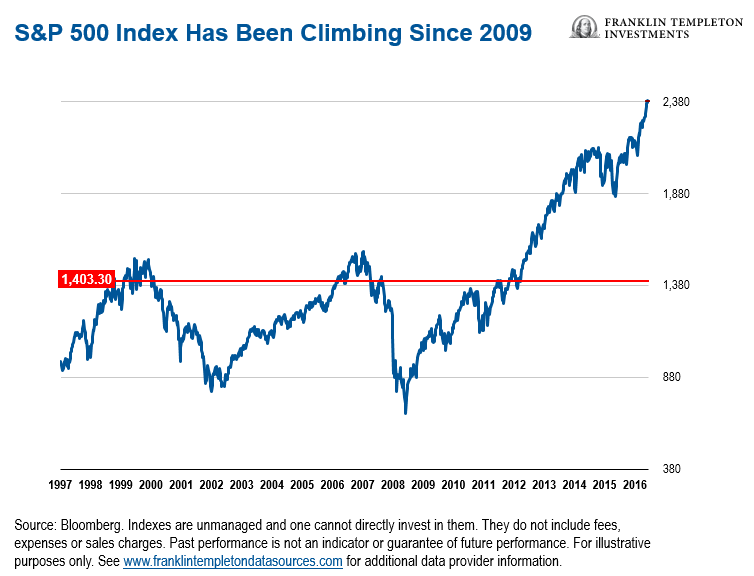 Another measure I like to look at is Robert Shiller’s CAPE Index (Cyclically Adjusted Price- to-Earnings (P/E) ratio), a smoother version of the stock market’s P/E ratio.  As of February 28 the CAPE was above 29, a level surpassed since 1881 in only three previous periods: the years clustered around 1929, 1999, and 2007. (See chart below) 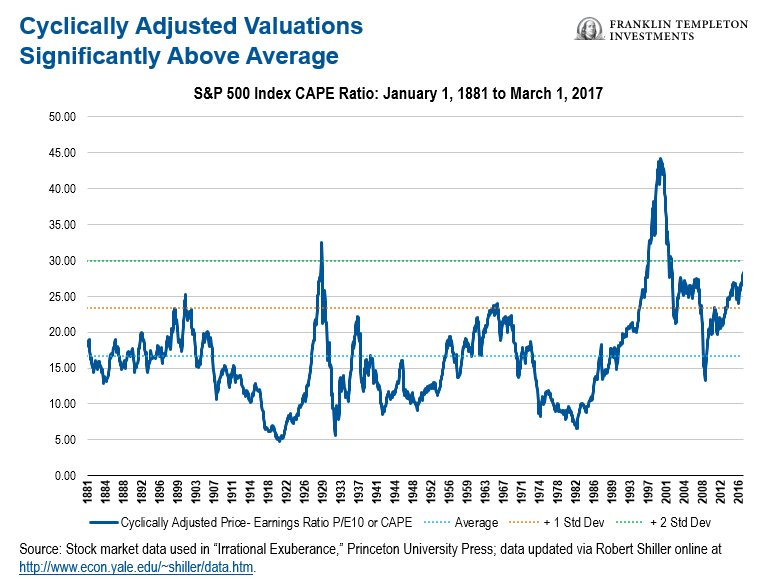 Again, my intent is not to instill fear or predict peril, but rather to provide some clarity as to where we stand from a historical perspective.

I prefer to be directionally agnostic in times of substantial uncertainty, and these are most decidedly uncertain times.

The following chart, which visualizes a risk-adjusted S&P 500 Index (SPX), offers another indication that markets may be running a tad hot. If the SPX is high and implied volatility (measured via the VIX2) is low, suffice it to say this particular finger of instability is quite steep as well. 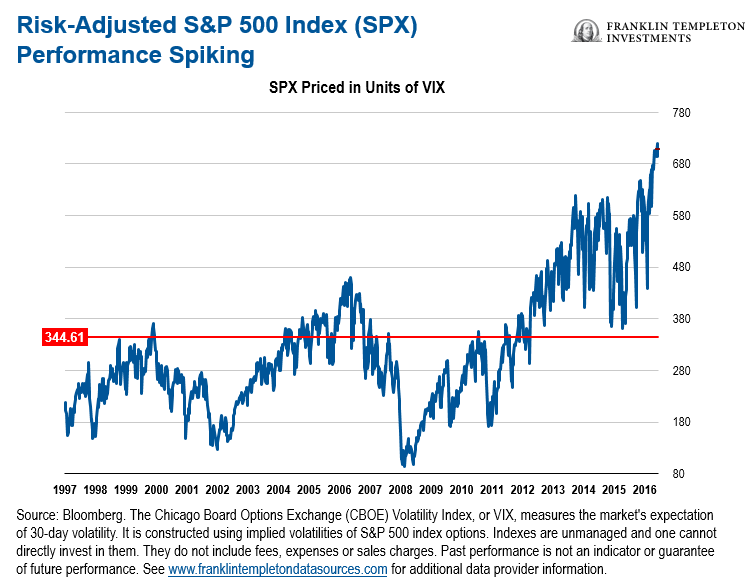 The markets are decidedly interconnected as well. We are linked globally in a complex and layered loom of investments, debt, trade, resources, international business, finance and currency.

And it is not just the equity markets that may possess fingers of instability; bond markets can possess them as well.

Seemingly every day in 2016 media headlines were highlighting another market excess. One example includes a 70-year bond issue (70 year!) from Austria that the market quickly devoured, despite a paltry 1.5% coupon.

Investors seem to be willing to ignore the potential risks associated with these investments.

Consider that when interest rates eventually return to more normalized levels, many of these bonds will then trade down in price. And this is to say nothing of inflation, which would exacerbate the problem.

Ultimately my sense of heightened vigilance stems from this: Bonds have been in a 35-year bull market and many investors today are not familiar with the market dynamics associated with a secular increase in interest rates and inflation. Any such moves from current levels would certainly make for a tumultuous ride.

I am not preaching fire and brimstone. Again, I do not intend for my message to be calling a market top or imminent crisis.

What I am speaking about is that reducing downside capture through actively managing risk is key to obtaining long-term, positive asymmetric returns. It is about compounding performance over time.

I feel markets are getting more fragile and volatile as the post-2008 era moves on. On some days it just feels spooky, and certainly not the time to be a full-on bull across the board.

The markets today are nothing like they were even 10 years ago. That is not to say they are riskier, because that is such an abstract and immeasurable quantity to gauge in aggregate that no one could ever know. But it is fair to say they are more complex, even by 2008 standards.

The number of participants, assets under management, trading strategies, number of tradable instruments and the light-speed at which information is moved and processed are all grains of sand building a highly interconnected pile.

When things go wrong in a complex system, the scale of disruption is nearly impossible to anticipate. There is no such thing as a typical or average forest fire, for example.

For me, there really is only one reasonable way forward. Equity exposure has made winners out of nearly everyone since 2009, but I think the winners in the next market phase will be those that demonstrate the most discipline and effective risk management.

In our view, implicitly the best way to mitigate risk should be through active investment management.

The alternative simply means going along for the ride, letting the market dictate direction, speed and control. I prefer to have my hands on the wheel—and the brake. These are some steep hills.

All investments involve risks, including the possible loss of principal. Stock prices fluctuate, sometimes rapidly and dramatically, due to factors affecting individual companies, particular industries or sectors, or general market conditions. Bond prices generally move in the opposite direction of interest rates. Thus, as prices of bonds in an investment portfolio adjust to a rise in interest rates, the value of the portfolio may decline.

1. Source: FactSet. Indexes are unmanaged and one cannot directly invest in them. They do not include fees, expenses or sales charges. Past performance is not an indicator or a guarantee of future performance. See www.franklintempletondatasources.com for additional data provider information.

2. The Chicago Board Options Exchange (CBOE) Volatility Index, or VIX, measures the market’s expectation of 30-day volatility. It is constructed using implied volatilities of S&P 500 index options. Indexes are unmanaged and one cannot directly invest in them. They do not include fees, expenses or sales charges. Past performance is not an indicator or guarantee of future performance.