The Federal Reserve’s September policy meeting played out largely as expected, as US monetary policymakers left the central bank’s benchmark short-term interest rate unchanged. The Fed did clarify when it would begin to unwind its hefty balance sheet, and updated its economic forecasts and interest-rate projections. Chris Molumphy, Franklin Templeton Fixed Income Group CIO, says the communication from the latest Fed meeting should not rattle the markets much, and that the next interest-rate hike now seems most likely to come in December.

The Federal Reserve (Fed) left its benchmark interest rate steady at its September meeting, which was what the market had anticipated. The focus thus shifts to the beginning of the Fed’s reduction of its $4.5 trillion balance sheet, set to start in October. Even there, the Fed had been telegraphing the process would soon start, so that announcement was not a surprise either.

We think the pace of the reduction will be key to watch. The Fed announced the reduction would be slow—just $10 billion a month to start. It also reiterated the framework it had outlined in June of $6 billion in Treasuries and $4 billion in mortgage-backed securities per month, then slowly ratcheting up the amount.

Our general sense is that this pace had already been well-telegraphed, so the markets have responded pretty well. We think the market should be able to take the Fed balance-sheet reduction process in stride.

Fundamentally, the economic backdrop for the United States and globally remains positive, and this type of backdrop generally leads toward a constructive view on risk assets.

The other big area of focus is the Fed’s “dot plot,” which is its projections for interest rates going forward. The Fed still is keeping its tightening bias, with one more rate hike projected this year and three next year. So the market is now focused on the December policy meeting.

For quite some time, the markets haven’t quite believed the Fed’s projections for interest-rate hikes as represented in the dot plots. The market has been more conservative in its view of the pace of rate hikes that would actually occur.

The Fed did bring down its long-term target rate to 2-¾% from 3%. In this cycle, the Fed conveyed that perhaps it didn’t need to raise rates as much as it has in past tightening cycles, and relative to what it thought a couple years ago. So we have some guidance in terms of where interest rates might go looking out longer term.

Remember, the Fed’s projections are just forecasts—which can change based on data.

And, the Fed has made it clear its decisions are data-dependent. So, the main reason the Fed has been reluctant to raise rates much is because inflation has been lower than the Fed anticipated it would be.

The market thinks the Fed will be extremely slow in its tightening, and I think there will still be some disconnect with the Fed’s projected pace going forward. 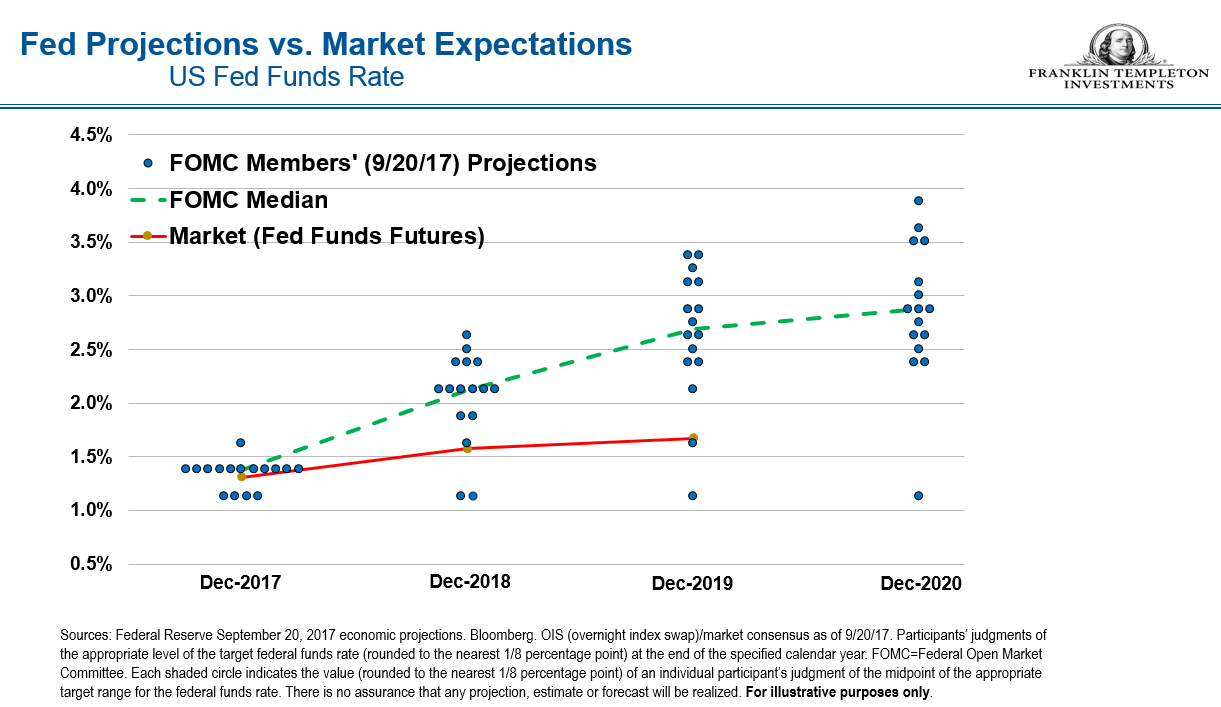 In its post-meeting statement, the Fed did mention temporary factors that could boost inflation, namely the hurricanes we have recently seen hit the United States.

As investors, we are aware of all the factors that could impact monetary policy—and our portfolios—but we try to look through short-term, transitory factors that don’t change the economy’s fundamental trajectory. These factors will impact data, but they aren’t ultimately the primary drivers of policy.

Our view is that inflation is not completely dead. We’d tend to think that ultimately, there will be a gradual pickup in inflation based on the positive fundamentals in the economy. That means the Fed will likely continue to gradually increase rates. It may not be at the pace the dot plots show, but we also think the market may be too conservative in its view that short-term rates are barely going up.