In 2017, the Bank of Canada and the Bank of England joined the US Federal Reserve in raising interest rates from at or near record lows. However, Chris Siniakov and Andrew Canobi of Franklin Templeton’s Australian Fixed Income team say the Reserve Bank of Australia will likely take a more cautious approach because the country’s households are struggling. In fact, the next step could be a rate cut.

As economic growth strengthens in many parts of the world, some prominent central banks are switching to a more hawkish policy. This year, the Bank of Canada and the Bank of England joined the US Federal Reserve in raising interest rates from at or near record lows.

Now, some market commentators say the Reserve Bank of Australia (RBA) could be next.

However, we don’t see RBA rates hikes in the next 12-18 months due to two issues with Australian households: record-high debt and record-low wage growth. If the RBA raised rates, we think many households would struggle to make their mortgage payments and would likely scale back on discretionary purchases. And that would likely hurt household consumption, which accounts for nearly 60% of Australia’s gross domestic product (GDP).

Why Australian Households Are Struggling

The RBA didn’t follow the near-zero interest rate policy many other central banks pursued after the 2007–2009 Global Financial Crisis. Instead, the reserve bank cut its benchmark interest rate, the overnight cash rate, to an emergency level of 3% in 2009, before raising it to 4.7% by late 2010. It then gradually cut rates to 1.5% in August 2016, and rates have stayed at this record low level ever since.

In an environment of low interest rates, many Australian households took on debt to buy bigger houses or renovate their existing homes. Australia now has the second-highest household debt-to-GDP level in the world, second only to Switzerland.1 In addition, many of these loans have floating rates that reset every couple years, which would lead to higher mortgage payments in a rising-rate environment. 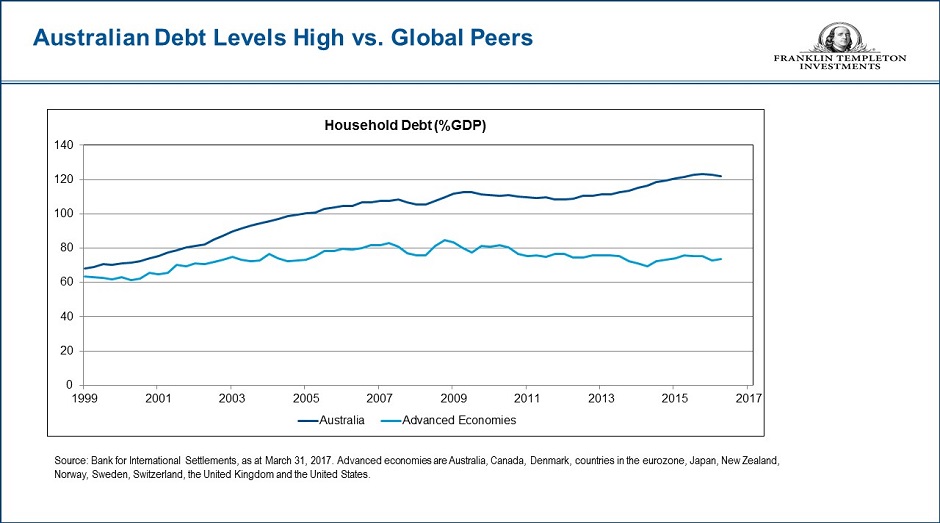 Australian households have also used lower interest rates to maintain their lifestyles, despite little or no wage growth. According to the Australian Bureau of Statistics, wage growth is at the lowest level on record.2 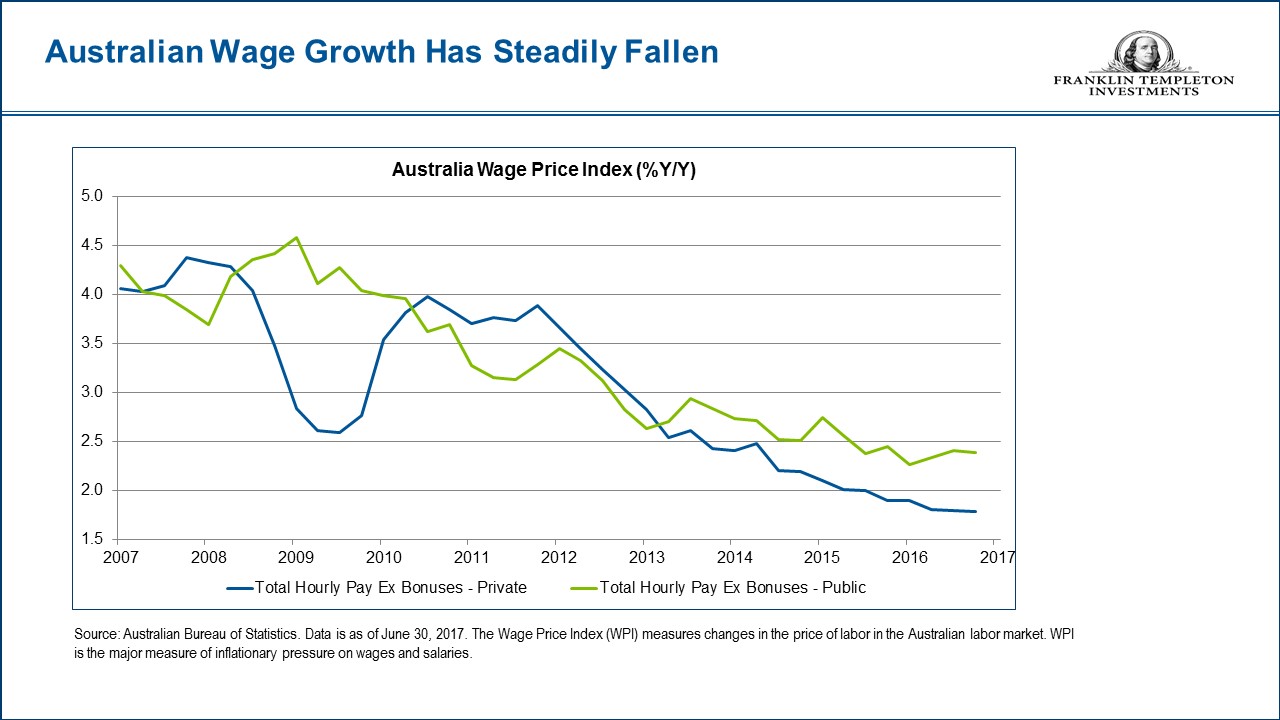 Without wage growth, we believe it will be difficult to drive Australia’s consumer price index (CPI) above the RBA’s target band of 2%-3%, which would lead the monetary policymaker to consider raising rates. The Australian labor market has seen improvement in the past six months, but there is still significant slack.

Despite inflation growth that is below the RBA’s target band, Australian households are paying more for non-discretionary essentials like energy, education and health care. As a result, households have less cash for discretionary items like cars, appliances and clothes. Retail sales fell 0.3% in the third quarter 2017, the weakest reading in seven years.3 We don’t see that trend reversing until wages pick up.

For these reasons, we don’t think the RBA will raise rates in the next 12-18 months. There is a heavy load on the shoulders of Australian households. Australia’s economy is benefiting from global growth, particularly in China, but that growth would have to be quite significant to reduce household debt or improve wage growth. If these issues don’t improve in the next year or so, we believe the RBA’s next course of action could be a rate cut.