The US financial sector faced heavy scrutiny in the wake of the global financial crisis of 2008-2009, but the end result was that banks emerged in better shape overall, according to Shawn Lyons, vice president and portfolio manager, Franklin Templeton Fixed Income Group. He says the combination of a healthy US economy and tax reform should bode well for bank fundamentals.

Outlook for US Banks

The US financial sector has been under a microscope since the global financial crisis (GFC) of 2008–2009, and I think that scrutiny has actually left US banks in a very enviable position.

When analyzing the health of banks from a fixed income perspective, we use the CELS rating system also known as “CAMELS,” which incorporates six factors: capital adequacy, asset quality, management, earnings, liquidity and sensitivity to risk. Considering these factors, we think industry fundamentals are sound.

Capital levels are well in excess of where they were a decade ago. Asset quality remains very strong among most sectors. Liquidity is good, with bank deposits generally growing across the industry. Loan-to-deposit ratios have generally been declining since 2010, although there has been a recent uptick.

US banks have traditionally faced heavy tax burdens, which weigh on their bottom line. As such, I think recent US tax reform looks to be positive for banks. Corporate tax rates moved from 35% to 21% across the board.

One of the consequences of the GFC was a tightening of lending standards—making it more difficult for riskier applicants to obtain credit. About four or five years post-crisis, commercial and industrial lending (C&I) was one of the first segments to see lending standards ease, and we saw pretty good growth in that segment. Subsequently, we started to see some easing in other areas, for example, auto lending and credit cards.

Each quarter, the Federal Reserve (Fed) releases its Senior Loan Officer Survey, which addresses changes in the standards and terms on, and demand for, bank loans to businesses and households over the prior three months. In the latest survey, we saw C&I lending standards continue to ease overall.1 Most lending standards tightened on the commercial real estate side of things, but the consumer loan side (including real estate) has been fairly benign and was essentially flat quarter-over-quarter in the latest survey.

One of the questions in the Fed survey asked respondents about their 2018 outlook. On that front, respondents anticipated a small tightening of standards in credit cards this year, but easing on the mortgage side.2

We have seen some rather somber headlines about increasing delinquencies or credit losses in the areas of consumer credit cards and student loans. I would point out that student lending is not necessarily a banking risk, as more than 90% of student loans are government-guaranteed and government-owned.

On the credit-card front, we have seen four quarters of increased delinquencies. However, the increases came off an extremely low level and remain manageable. Additionally, credit cards are extremely profitable for banks.

The pace of C&I lending growth has declined over the past few years at the same time short-term interest rates have increased. Part of this decline might be due to higher interest rates, but I think it was also partly due to tax reform as companies and management teams waited to see what would develop. Bank management teams have conveyed to us they expect C&I lending to pick up this year, and that makes sense to us given the healthy economic backdrop and the tax reform now in place. Even with higher interest rates, our view is that the marginal investment for corporations is going to look more attractive from an after-tax rate of return perspective.

Overall, we have a positive outlook on C&I lending. Similarly, we see economic fundamentals driving the consumer credit card and auto segments as well. If the US economy continues to perform well, I think those areas should grow, albeit modestly.

I think the mortgage lending picture is particularly interesting. There are changes in the tax code relative to interest deductions, and we have seen the current coupon rate on conventional mortgages rise above 4%. It’s been quite some time since we’ve seen these sorts of levels.

The question is whether a mortgage rate at 4.25% or 4.50% will slow the segment down. I think if we see easier lending standards (which the banks are talking about) and a healthy economy, then the segment can grow, but probably nothing huge—perhaps in the single digits.

Technology and US Banks

We live in a digital world. Customers have a lot of alternatives to traditional banking. In the United States, there are nearly 5,000 banks.3 That’s a far cry from the 14,000 or so we had in 1984, and the 7,000 or so we had pre-GFC. But what that does tell us is that we’ve had robust merger-and-acquisition (M&A) activity in the banking industry for quite some time.

M&A does present challenges from a technology standpoint. When you merge two old institutions, the legacy technology usually gets a band-aid to make a square peg fit into a round hole so to speak. You can merge two banks and slap new signage on the buildings, but it’s what’s behind the storefront that is key. 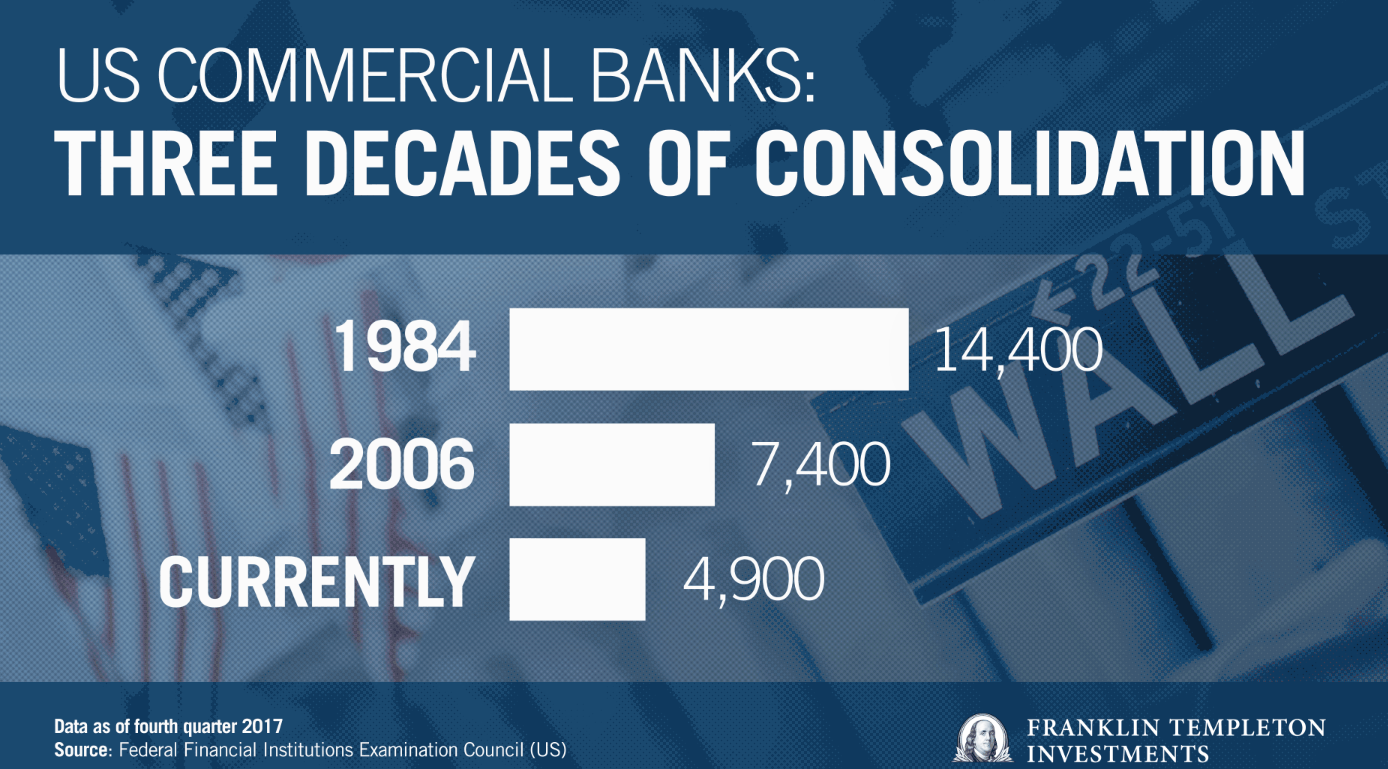 By and large, US banks haven’t traditionally been innovators. Many have technology that is still in the mainframe era, not in the cloud era. So, a lot of these new financial technology (fintech) companies have an advantage in that they can be in real time—their systems can immediately talk to each other. Traditional banks are spending an enormous amount on technology as this area is both a challenge and tremendous  opportunity.

Banks have also faced a regulatory burden. However, the trajectory of that burden seems to be reversing (or at least stabilizing) under the new US administration. Banks should now have more money freed up to spend on technology, including competitive types of payment platforms. There are a number of things banks are trying to do with cloud-based technology and transacting in real time. I think fintech is pushing and pulling traditional banks to innovate and to compete.

Cybersecurity goes hand in hand with increased use of and spending on technology. This is one area where I think banks will collaborate and form working groups to focus on the different potential threats and how to thwart them. While there are still some challenges in this area to work on, banks have poured a lot of resources into making their systems as bulletproof as possible.

All investments involve risks, including possible loss of principal. Bond prices generally move in the opposite direction of interest rates. As the prices of bonds in a portfolio adjust to a rise in interest rates, the value of the portfolio may decline. Investing in a single-sector involves special risks, including greater sensitivity to economic, political or regulatory developments impacting the sector. Commercial banks, savings and loan associations, and holding companies of such are especially subject to adverse effects of volatile interest rates, concentrations of loans in particular industries, and significant competition. Profitability of these businesses depends significantly upon the availability and cost of capital funds. Banks and financial services companies could suffer losses if interest rates rise or economic conditions deteriorate.