As US-China trade tensions continue to make headlines, some investors may not realize the fallout will affect many other economies, one being Australia. Chris Siniakov, our managing director of Australian Fixed Income, explains why Australia’s goods and services sectors depend on China. He also shares his view on why a potential trade war could negatively impact the country’s education and tourism industries. That said, he’s not alarmed by recent trade headlines—at least not yet.

While it’s impossible to fully determine the potential impact of a US-China trade war on Australia, it isn’t too much of a stretch to conclude that almost any issue that carries “war” in its title probably can’t be good for the global economy. Australia is no exception to this rule.

What we find more interesting, though, is just which segments of the economy are most likely to be the hardest hit. China is Australia’s top export partner for both goods (e.g., iron ore and coal) and services (e.g., education and tourism). We feel that an uncomfortable “squeeze” is more likely to come from services.

As the chart below shows, the dominant categories in China’s current account balance over the last five years have been trade-related goods and services. As the manufacturing engine to the world, the country’s goods trade surplus is well understood. The dark blue line in the chart shows that China’s trade surplus in 2017 was approximately 3.9% of gross domestic product (GDP).1 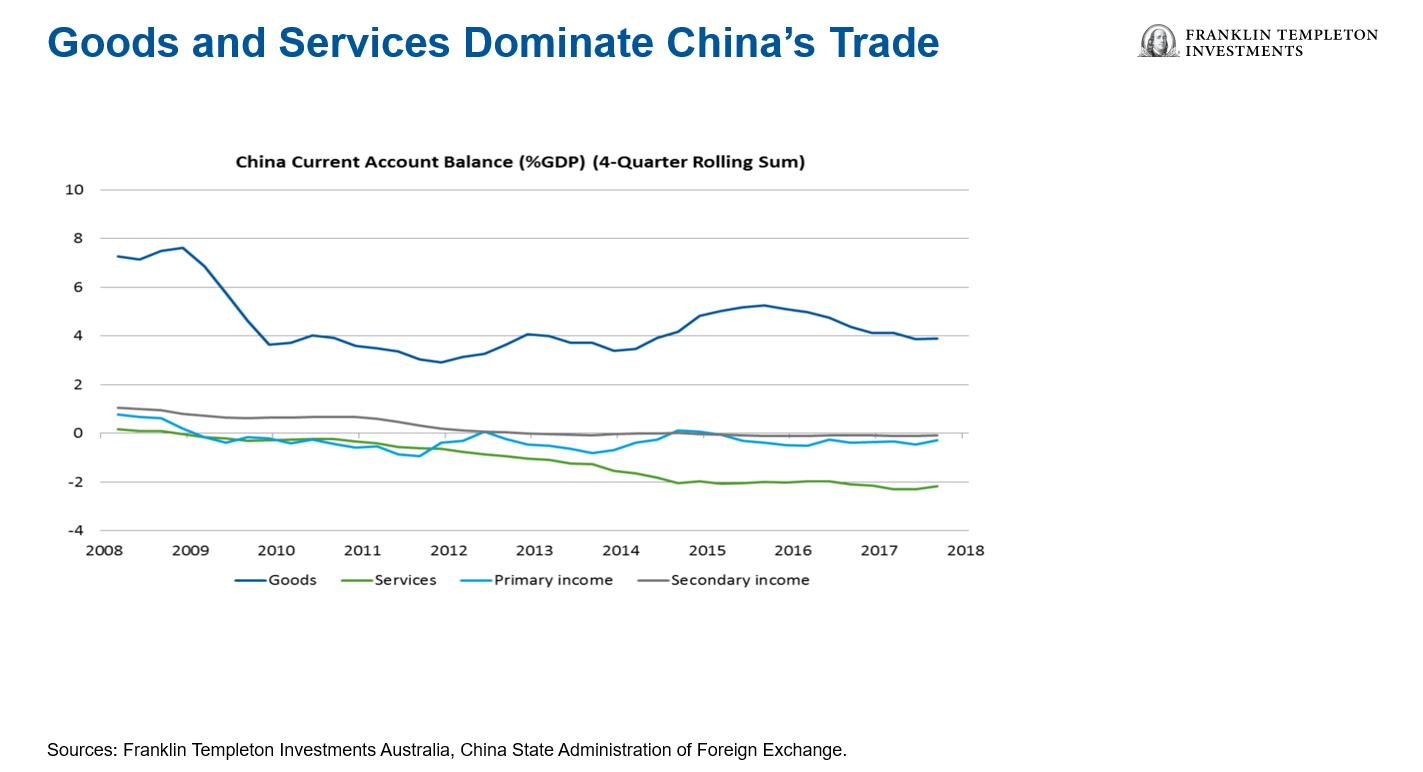 In March, US President Donald Trump’s administration announced steel and aluminum product-related tariffs on a range of countries, then subsequently added US$50 billion in additional tariffs on other goods made in China. China retaliated by announcing tariffs of 25% on more than 100 US products. Reacting to China’s response, Trump’s administration has said it plans to invoke Section 301 of the US Trade Act of 1974, which could significantly increase the number of products and trade subject to higher tariffs to the tune of US$100 billion.

So far, the net effect of Trump’s ambit claim and China’s response has been relatively mild. However, should trade-policy tensions escalate to a point which seriously challenges China’s US$475 billion goods surplus, then we would expect that China could respond more forcefully on services to offset a decline in goods exports and to maintain a net trade surplus.

Australia Caught in the Crosshairs

According to the Australian Bureau of Statistics, Australia’s top exports are iron ore, coal and liquefied natural gas on the goods side, and education and tourism on the services side.2

Australia has been an enormous beneficiary of China’s economic prosperity and infrastructure development over the last 20-30 years. We expect this long-term thematic will persist. Even in a more hostile global trade environment, we believe China’s government will remain committed to building housing, roads, railways and bridges for its people. Further, the quality of Australia’s iron ore is also important.

In contrast, China could rapidly curtail its services deficit, which would place acute pressure on the Australian economy. Travel (tourism and education) accounts for 85% of China’s US$265 billion services deficit.3 At US$225 billion, China’s expenditure on international travel is a big baseball bat which policymakers are not afraid to swing.4 China has the ability to ban travel of its citizens to specific countries, and has. In 2017, China banned tour groups from visiting South Korea, and the ban still hasn’t been fully lifted.

This issue is important for Australia’s education and tourism industry, which ranks third in its total export mix. Notably, much of the demand comes from China. According to Austrade’s international visitor survey results, 1.3 million Chinese travelers visited Australia in 2017, ranking it at the top of the list.5 China’s visitors also provided a total spend well more than AUD$10 billion.6 Further, education and tourism translate to multiple rounds of economic benefits as the visitor’s dollars work their way through the local economy (retail trade, transport, restaurants, cafes, housing, etc.). 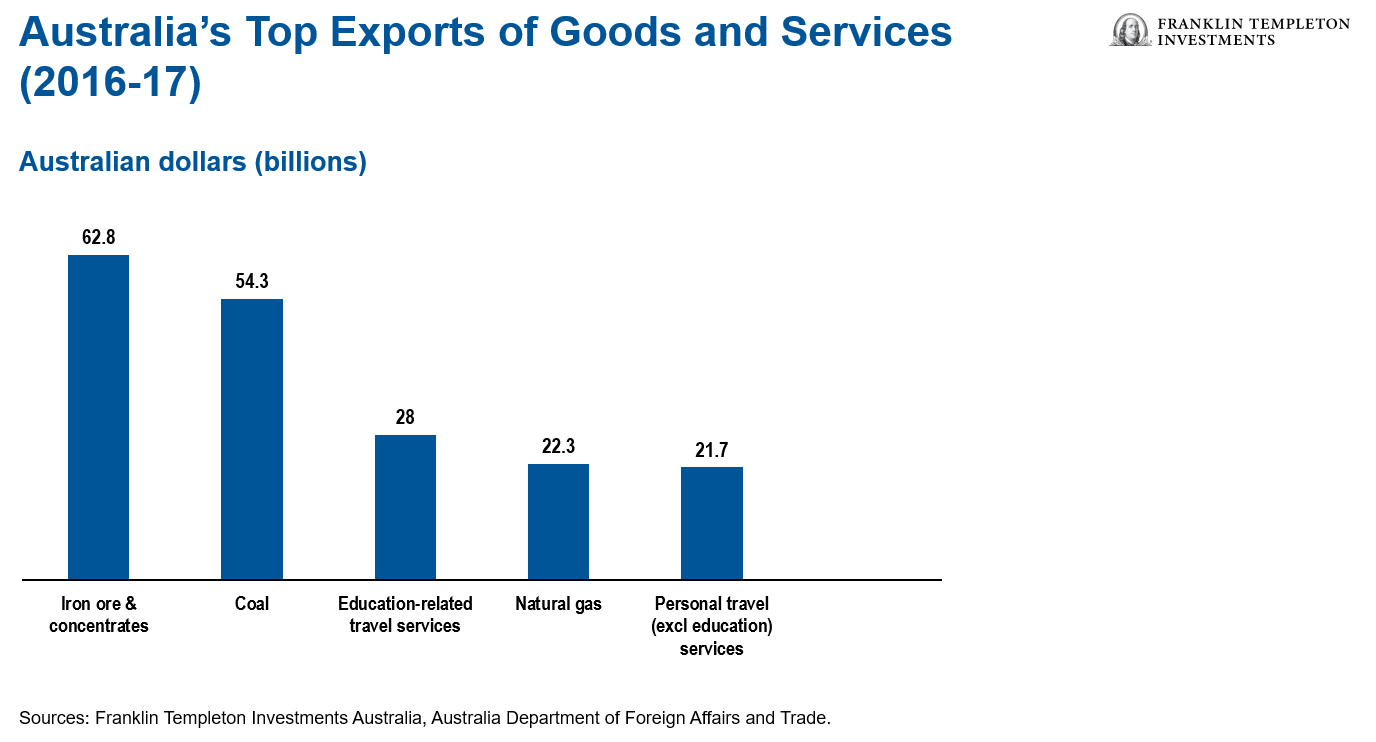 It may be that the US-China trade war withers. However, we believe it is prudent to understand the key long-term linkages and dependencies. We are aware of the potential for policy with Chinese characteristics7 but, at this juncture, we are not alarmed.

All investments involve risks, including possible loss of principal. Special risks are associated with foreign investing, including currency fluctuations, economic instability and political developments. Investments in emerging markets involve heightened risks related to the same factors, in addition to those associated with these markets’ smaller size, lesser liquidity and lack of established legal, political, business and social frameworks to support securities markets.

7. Policy with Chinese characteristics is a phrase that is sometimes used to point out that China, unlike much of the developed world, is a centrally commanded economy. While China may have introduced more market mechanisms into its economy, we have seen the state still play a much larger role in determining what goes on.