Some investment leaders from Franklin Equity Group explain why US tax reform and sectoral trends could lead more companies in select industries to raise dividends this year.

Since the passage of US tax reforms last December, many market observers have been waiting to see what US companies would do with the extra cash in their coffers. So far this year, dividend increases have been one way in which some of these companies have chosen to reward investors.

In the first three months of 2018, S&P 500 Index companies spent a record $109.2 billion on dividend payments.1 And, according to Franklin Equity Group’s analysis of S&P data, total dividends for companies in the index are projected to rise double digits this year for the first time since 2015, as the chart below shows. 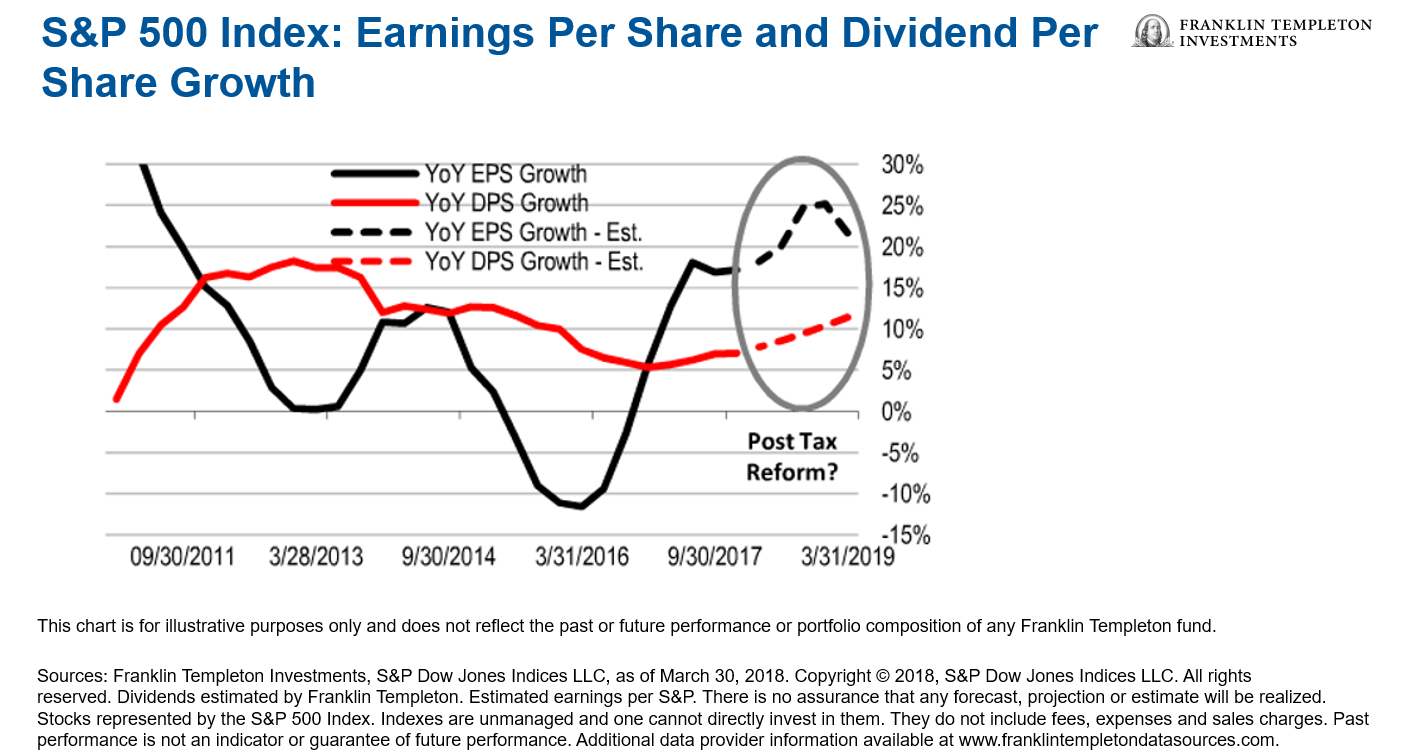 According to Franklin Equity Group’s Don Taylor, select companies in the industrials, materials and consumer discretionary sectors are likely to hike dividends in 2018. In March, he cited a reduction in the US corporate tax rate from 35% to 21% and a stronger global economy as reasons why.

As earnings and cash flow improve with economic growth, companies will keep a higher proportion of that money because of the lower tax rate. That, in turn, is likely to lead to higher nominal dividends.” – Don Taylor, March 2, 2018.

Don Taylor expects to see the same potential benefits for other stocks in domestic sectors that are sensitive to changes in the economy, such as banks, commercial services, retail and utilities.

That said, US tax reform and economic growth don’t seem to be the only factors that could lead to higher dividends this year.

Franklin Equity Group’s Matt Quinlan thinks select large-capitalization US banks might benefit from a more favorable regulatory environment. As a result, he believes those banks have room to increase dividends as earnings improve and capital is freed up.

US banks have worked to build up their capital ratios since the financial crisis [of 2008–2009]. Now, we think regulators seem generally confident that bank capital ratios are sound. These institutions performed well in government-mandated stress tests last year, which allowed them to return capital to shareholders.” – Matt Quinlan, April 19, 2018.

As the chart below shows, financial companies in the S&P 500 Index have increased free operating cash flow (FOCF) relative to debt levels over the past two years. As a result, select banks could potentially return an increasing amount of profits to shareholders as they generate higher levels of after-tax cash flows, partly due to US tax reform. 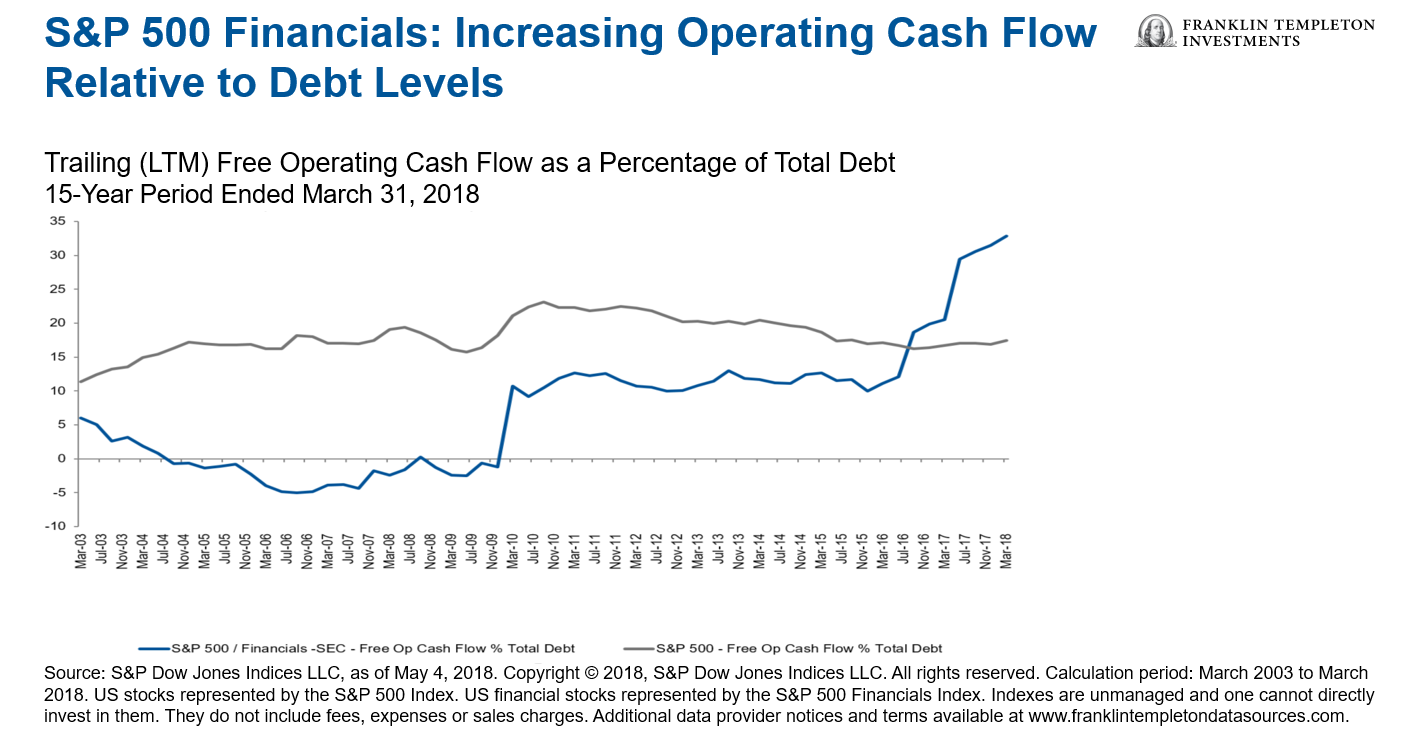 Meanwhile, after years of cost and capital spending reductions, Franklin Equity Group’s Fred Fromm thinks many natural resources companies that aren’t generating free cash flow today will likely be doing so in the near future.

As the chart below shows, S&P 500 Index companies in the oil and gas exploration and production industry have had positive FOCF as a percentage of total debt over the past year. 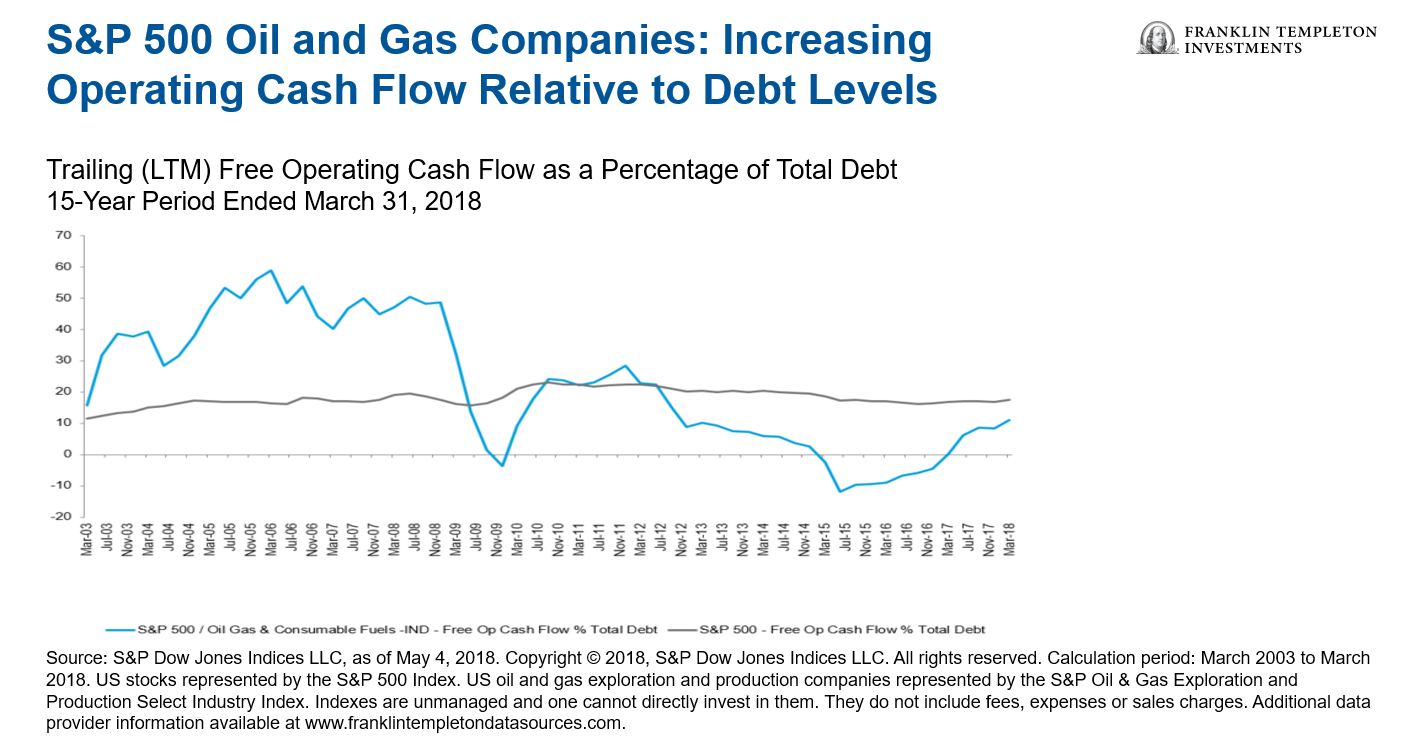 Fred Fromm thinks the additional liquidity when combined with healthy balance sheets, can allow for the return of capital to shareholders through dividends or share repurchases, which should be supportive of equity values.

Lately we have seen several energy and materials companies raising their dividends, and in some cases they have reinstituted their share repurchase programs, which can be executed more effectively during periods of market weakness. Oil and gas exploration and production (E&P) companies that have instituted buyback programs and dividend increases have outperformed over the past several months in cases where the programs are funded by sustainable free cash flow generation.” – Fred Fromm, April 18, 2018.

A Word of Caution

Although the outlook for dividend increases in select industries appears promising to our investment professionals, it’s important to remember that, for stocks paying dividends, dividends are not guaranteed. They can be increased, cut or eliminated without notice.

Therefore, investors need to be prepared for the possibility that a company that has made dividend payments in the past will stop doing so. That happens most often when companies face financial challenges that require them to take the cash that in more ordinary times would have paid in dividends.

All investments involve risks, including possible loss of principal. Stock prices fluctuate, sometimes rapidly and dramatically, due to factors affecting individual companies, particular industries or sectors or general market conditions. For stocks paying dividends, dividends are not guaranteed, and can increase, decrease or be totally eliminated without notice.