In June 2016, we released Global Macro Shifts1 (issue 5)—Emerging Markets: Mapping the Opportunities [GMS-5]. This paper discussed many of the risks and opportunities across emerging markets while highlighting the importance of assessing economic resiliencies in individual countries.

Since then, we have seen notable rallies in emerging economies as capital has returned to a number of undervalued markets, particularly during 2017. Those trends can continue, in our view, particularly in specific countries that have made strides in fortifying their economies against potential trade shocks, commodity price shocks and exchange rate shocks.

In GMS-5, we introduced our proprietary Local Markets Resilience Index (LMRI), which scores countries along five resilience factors. Given that macro conditions are in constant flux, we are continuously reviewing and updating our LMRI scores. In this research briefing, we provide an external update on our current and projected LMRI scores for 23 countries. We also provide a breakdown of the five factor scores along with brief analyst notes for five countries with high projected scores and two that have low projected scores.

Overall, we continue to have a positive outlook for a select set of emerging markets, but it’s important to recognize that there are significant variations across the asset class. Thus, it’s critical to sort the stronger, more resilient economies from the weaker, more vulnerable ones, in our view. The LMRI scores illustrate aspects of our research process that aim to identify those more resilient economies and the concomitant longer-term investment opportunities that they may provide.

The Five Critical Factors of the LMRI

Focuses on the quality of macroeconomic policymaking, from an institutional and capacity-to-implement perspective, taking into account the broader enabling political environment. A well-functioning government and parliament, fiscal rules and a highly independent central bank improve the policy mix, as does the political ability to push through needed changes.

From their experience of past crises, evaluates the extent to which the country has learned lessons from previous crises or episodes of mismanagement of the economy, reevaluating the sustainability of its growth model and assessing financial fragilities.

The legal and institutional changes that improve productivity and economic growth, determining the ability of a country to enhance its institutions and productive capacity to drive sustainable economic growth. An extended period when high commodity prices and indiscriminate capital flows could compensate for economic mismanagement is unlikely to return soon. Over the long term, there is no substitute for the hard steps necessary to diversify economic structures, upgrade infrastructure, improve the business environment, facilitate innovation and invest in high-quality education. Specific structural reforms could relate to areas such as the governance of state-owned enterprises, labor laws, the energy sector and corruption.

Captures the ability of a country to grow on its own, abstracting from external factors. A small, open economy is highly dependent on the rest of the world. By contrast, a large economy has the efficiency of scale, the gravity to attract investment and the ability to generate growth independently from the rest of the world. Other factors that determine domestic demand include demographic factors such as population growth and the age of the population; inflation; and wages and employment growth. Overstimulation of domestic demand runs the risk of overheating and hence reduces the score. Given the heightened degree of uncertainty in the global environment, we expect economies that are comparatively insulated from global forces and with healthy domestic demand to outdo their peers.

Captures the traditional exposure to external shocks and the risk of a balance of payments crisis or capital flight. Such indicators include the current account, external debt and commodity dependence. In some countries, a substantial part of external debt is owed by companies to their foreign parent companies, and this is not regarded as a source of risk. “External vulnerabilities” are, in a sense, a different side of the same coin as “domestic demand.” They capture the same idea that in a very volatile global environment, some degree of insulation from external shock is likely to prove especially valuable.

The Scoring Process for the LMRI

For each factor, we separately assess both current and projected conditions, so as to gauge the degree of risk along the investment horizon. We aggregate the five individual category scores to obtain an overall country score—the LMRI score. The scoring along each category is necessarily based to an important extent on our subjective judgment; nonetheless, we believe it provides a strong rigor in assessing and comparing different markets in a way that allows us to assess the true underlying risk and to identify attractive opportunities where our score deviates significantly from the risk assessment implicit in market prices.

The rating of countries is based on the five criteria, described above. Each criterion is assigned a value between -2 and +2 for the current situation, and similarly a value for the projected outlook, in the views of the team. Exhibit 1 shows the results of our ranking system for the selected subset of EMs across the different regions. 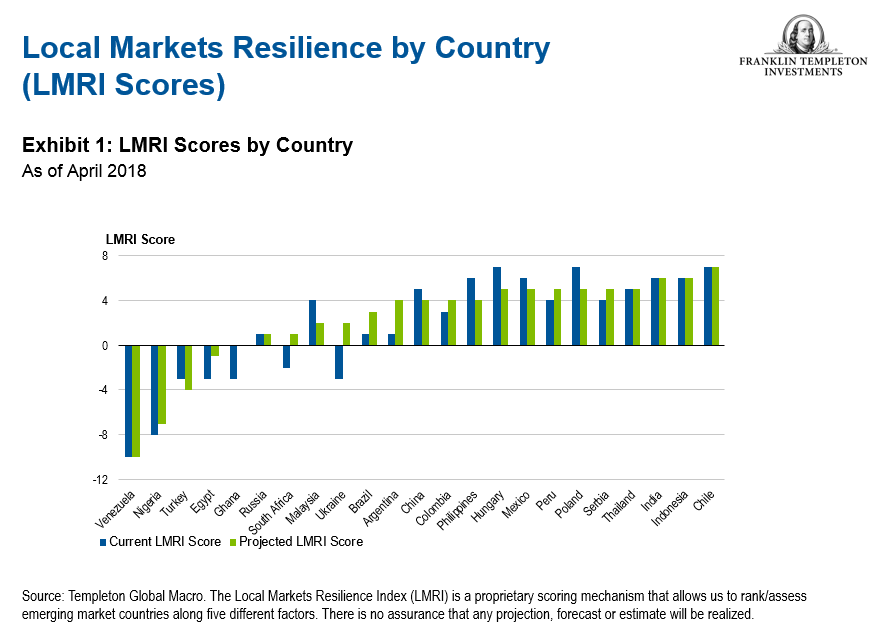 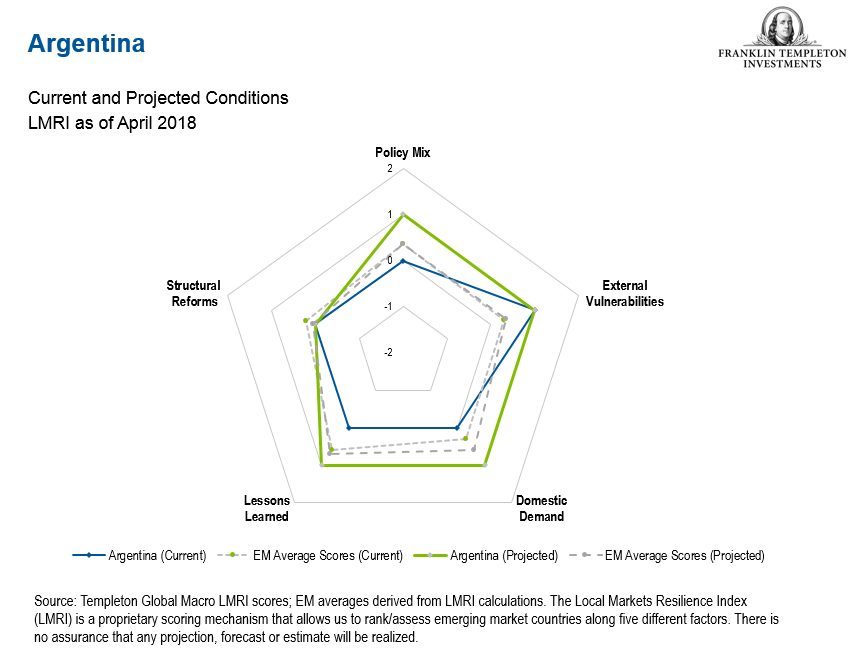 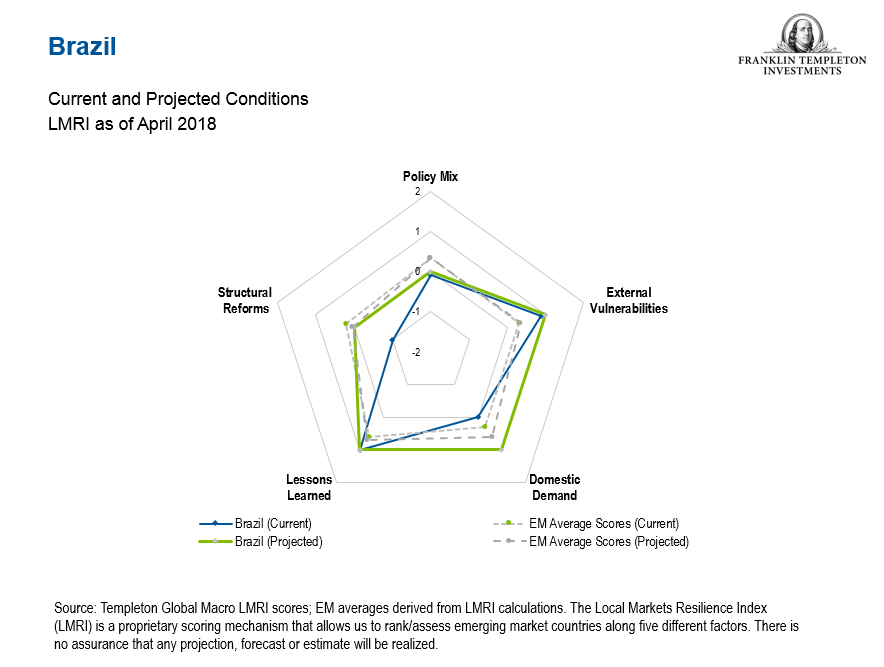 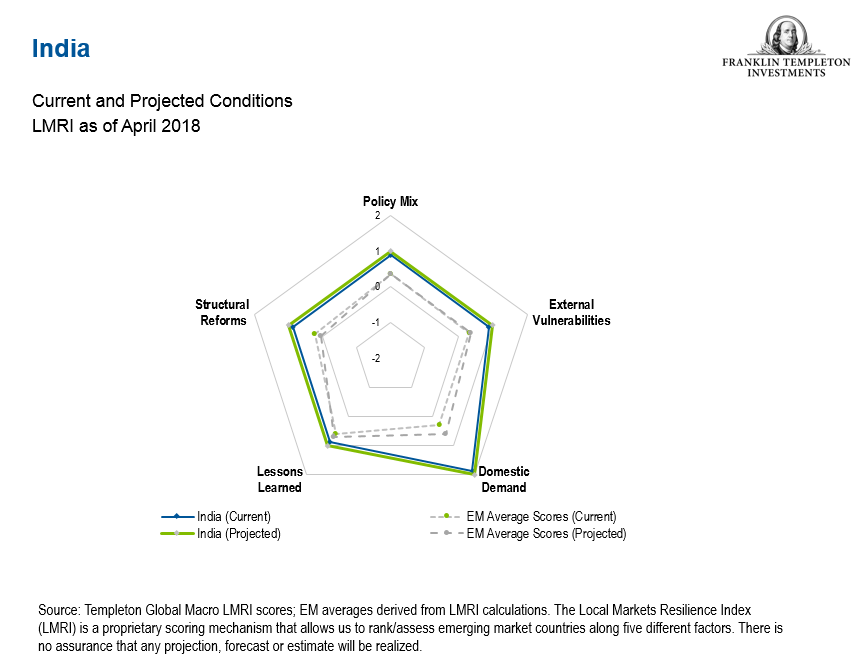 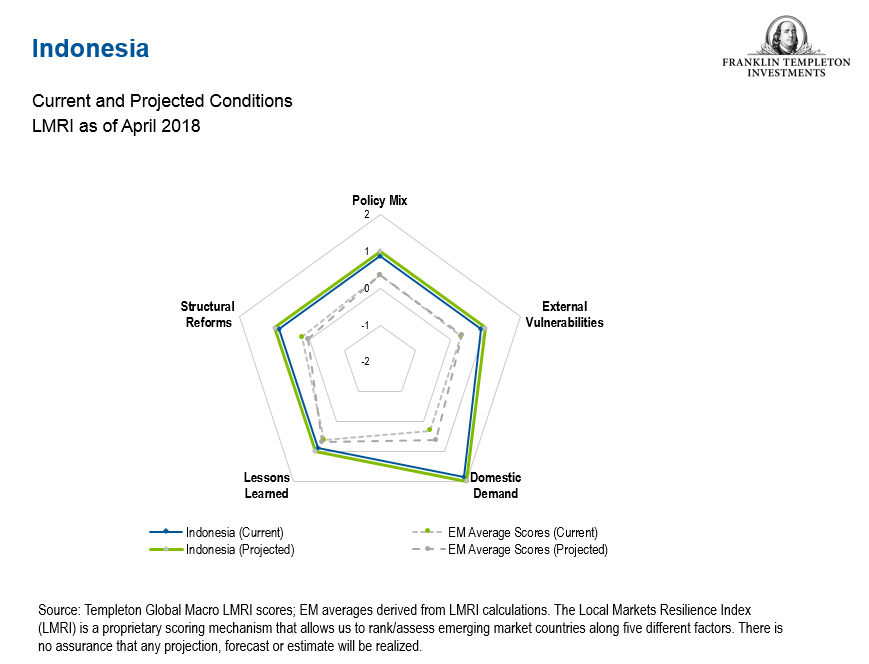 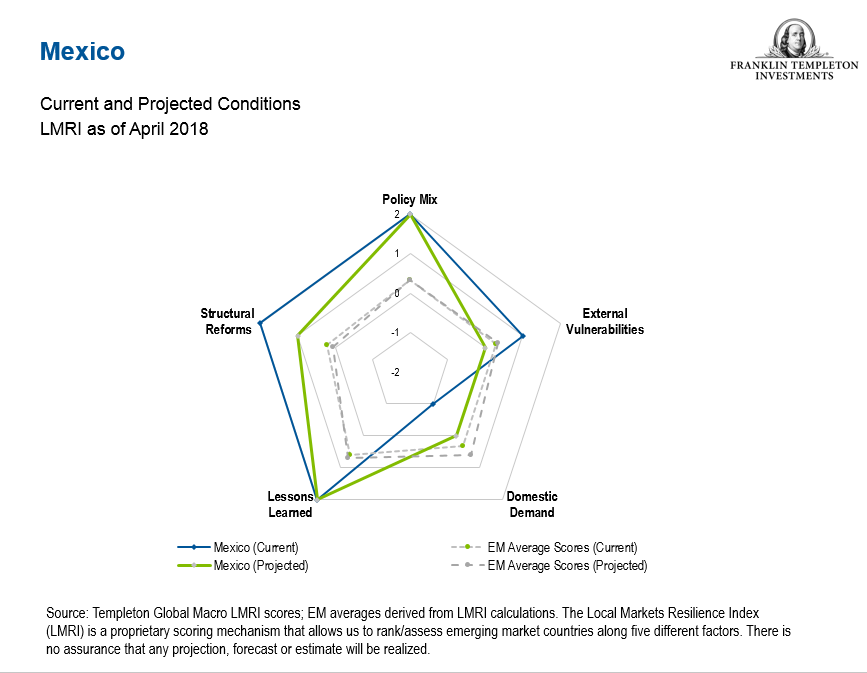 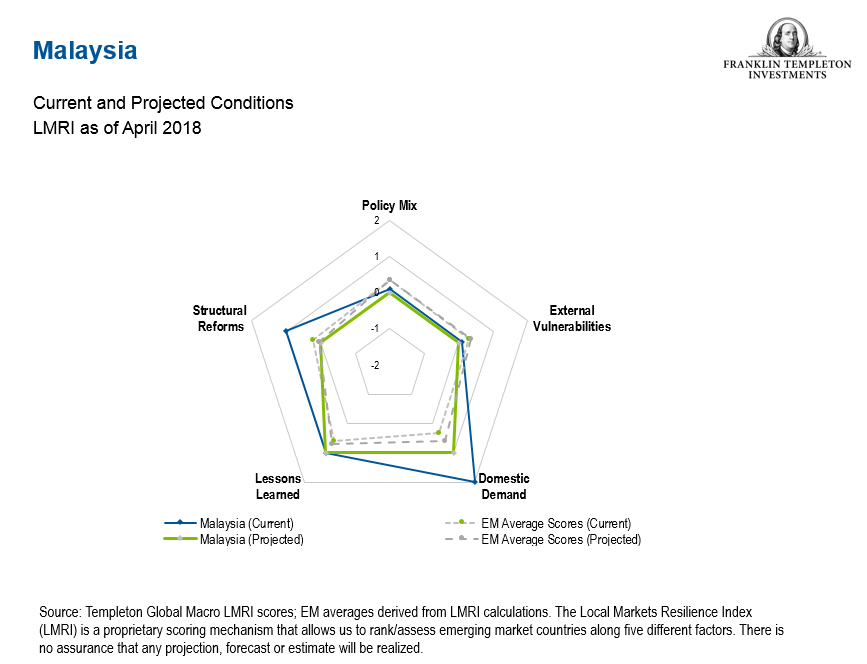 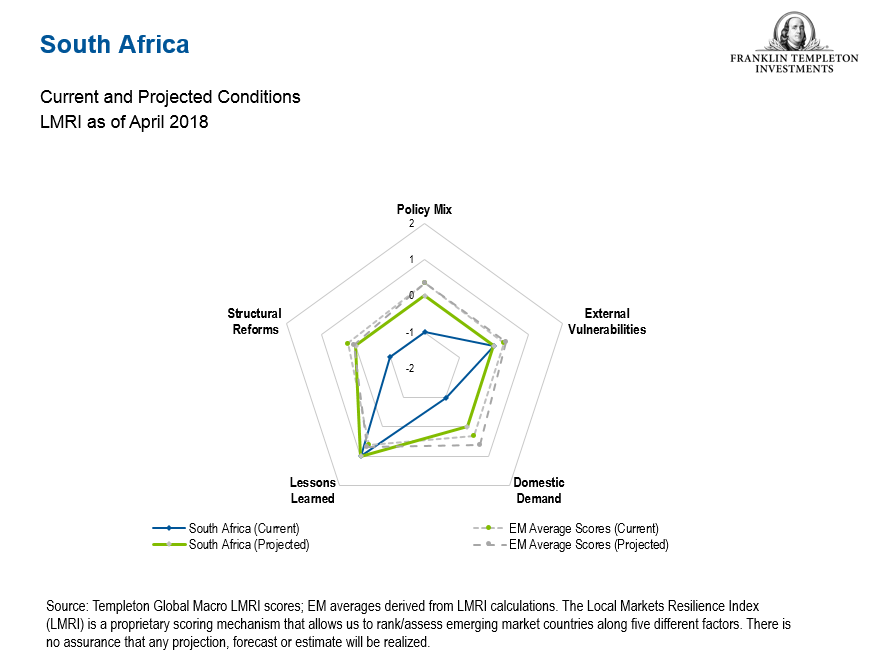 For more detail on the team’s LMRI scoring, read “Emerging Markets: Mapping the Opportunities” a research-based briefing on global economies featuring the analysis and views of Dr. Michael Hasenstab and senior members of Templeton Global Macro. Dr. Hasenstab and his team manage Templeton’s global bond strategies, including unconstrained fixed income, currency and global macro. This economic team, trained in some of the leading universities in the world, integrates global macroeconomic analysis with in-depth country research to help identify long-term imbalances that translate to investment opportunities.

All investments involve risks, including possible loss of principal. Special risks are associated with foreign investing, including currency fluctuations, economic instability and political developments. Investments in emerging markets, of which frontier markets area subset, involve heightened risks related to the same factors, in addition to those associated with these markets’ smaller size, lesser liquidity and lack of established legal, political, business and social frameworks to support securities markets. Because these frameworks are typically even less developed in frontier markets, as well as various factors including the increased potential for extreme price volatility, illiquidity, trade barriers and exchange controls, the risks associated with emerging markets are magnified in frontier markets. Bond prices generally move in the opposite direction of interest rates. Thus, as prices of bonds in an investment portfolio adjust to a rise in interest rates, the value of the portfolio may decline.
_____________________________________

1. Global Macro Shifts is a research-based briefing on global economies featuring the analysis and views of Dr. Michael Hasenstab and senior members of Templeton Global Macro.