In 2018, President Trump’s tweets on international trade have led to bouts of market volatility and concerns of a global economic slowdown. Against this backdrop, Franklin Templeton Multi-Asset Solutions’ Matthias Hoppe explains why he thinks economic fundamentals will determine the fate of the global economy more than Trump’s words will.

In recent months, President Donald Trump has imposed import tariffs on long-standing US allies, including Canada, Mexico and the European Union (EU). He’s also enacted tariffs on a growing list of products from China.

As the chart below shows, the two US neighbors—and the EU—have been the largest US trading partners over the past 10 years. 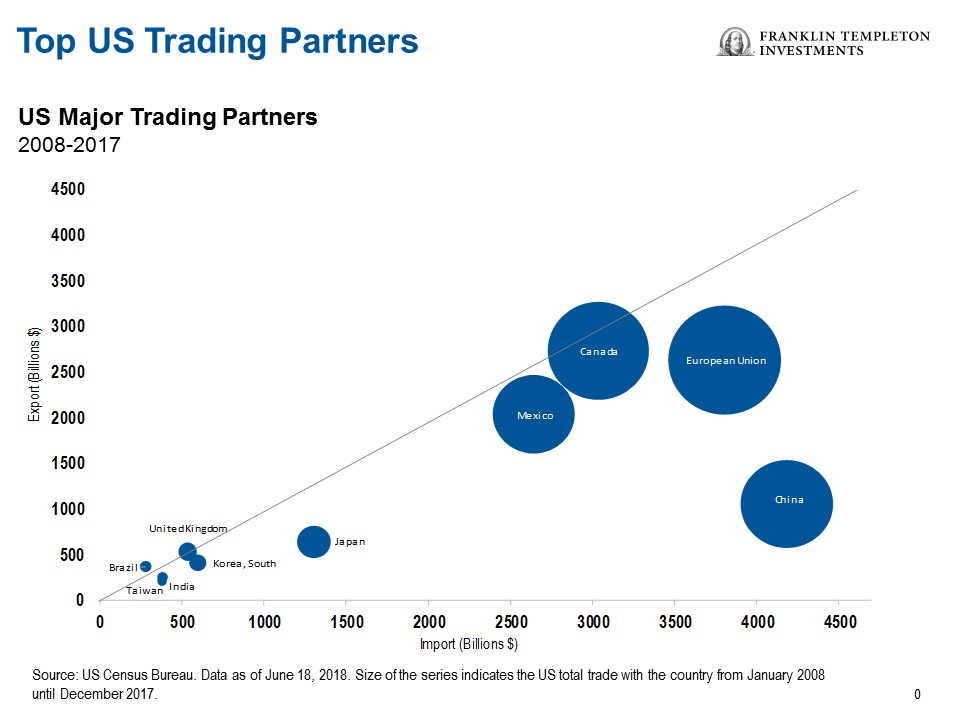 The communication channel for Trump’s thinking on trade issues always seems to be the same: Twitter. The impact of his recurring threats to raise even more customs duties on even more goods from abroad are felt not just on stock markets but across the full gamut of financial markets.

As soon as Trump tweets about punitive tariffs, US stock indexes often fall or rise, bond yields typically move, sometimes the US dollar depreciates or gains in value in one day. No wonder investors seem disorientated.

Despite the volume of headlines, Trump’s Twitter pronouncements haven’t done too much damage to global stock market performance overall this year—at least not yet. On the other hand, some emerging-market asset classes, particularly currencies, have been volatile as the world’s second-largest economy—China—has responded with tit-for-tat tariffs.

As the chart below shows, emerging-market currencies, as measured by the JP Morgan Emerging Markets Currency Index1, fell about 7% in the first half of 2018. 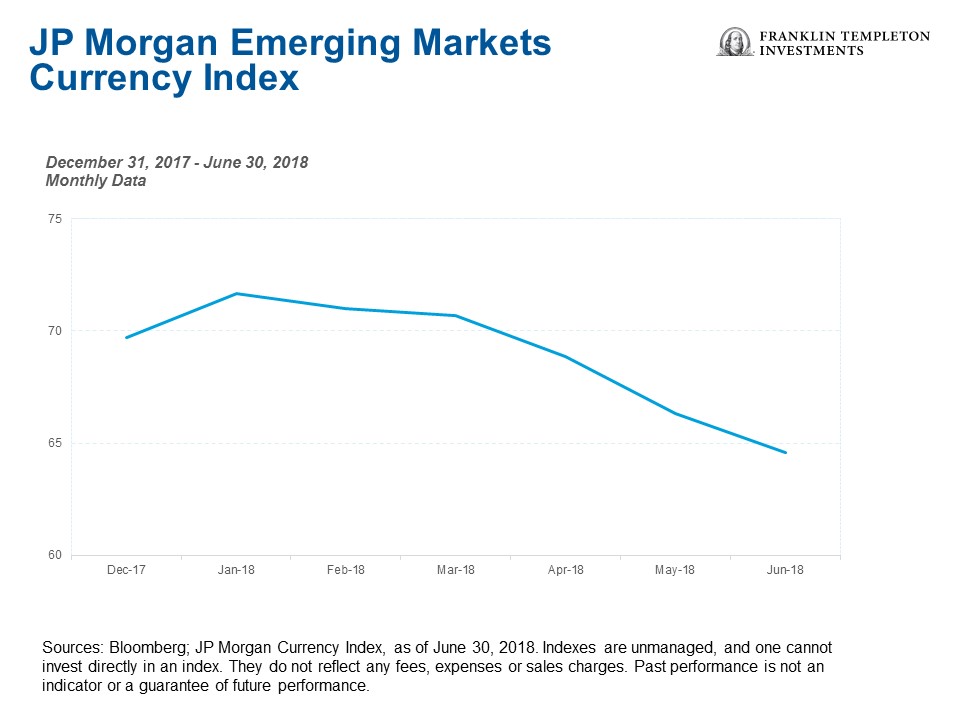 Why Trump Tweets Are Likely to Continue

In our view, the political noise related to trade and tariffs is likely to remain with us for the foreseeable future.

In the United States, mid-term elections take place in November. One-third of US senators and the entire House of Representatives are up for election.

And so we expect Trump to remain motivated to mobilize his electoral base. Experience tells us he thinks that is best achieved through campaigns against foreign powers.

Additionally, his approval ratings have generally improved this year—although from a very low base.3

In our eyes, there is little evidence that his protectionist stance has contributed to the better opinion poll results. Rather, we think they stem from the United States’ good economic situation. In the second quarter of 2018, US gross domestic product (GDP) grew at an annual rate of 4.1%, up from a growth rate of 2.2% for the previous quarter.4

However, we expect to see further barrages of tweets on punitive tariffs and security policy.

Could Trump’s words have a long-term impact on global stock markets? At the moment, the leading economic indicators, especially in the United States, continue to point to robust growth.

At the end of the day, we think economic fundamentals, rather than Twitter pronouncements, will decide.

If the economy continues to grow, we believe that should be positive for risk asset classes like equities. The question is how long the rally in the aging equity bull market can go on.

Already we’re starting to see signs of softer capital expenditure (CapEx) plans. That’s a marked difference from the beginning of the year, when indicators suggested firms were more bullish on investment.

Consumer confidence is another important measure, and while slipping recently, remains high. The US job market is still buzzing and the collective consumer mood seems to be correspondingly positive.

But how long can a strong US labor market cover the burgeoning problems of slowing world trade? Sentiment can turn quickly and that could in time also likely impact the fundamentals.

Stock markets, which we consider to be the leading indicator par excellence, could price in relatively weaker growth rather quickly, especially if they see world trade numbers deteriorate. Initial reports are already showing a slowdown in imports and exports. International trade is particularly important for Europe and the emerging markets, not only for general economic growth but also for corporate profits.

We believe Trump should want to balance political gain and economic disadvantage. At first glance, the potential costs of a trade war with China are significantly higher than those with the EU, because the integration of supply chains between the United States and China is far-reaching.

In addition, the United States ran a surplus in so-called primary income, which mainly consists of corporate profits made by EU subsidiaries of US companies, of $106 billion.6 This might explain Trump’s relatively conciliatory tone after the meeting with European Commission (EC) President Jean-Claude Juncker on July 25.

In contrast, the US overall current account deficit with China is indeed imbalanced as it totaled $358 billion in 2017—thanks to the fact that China has long since restricted investments by foreign companies.7 Our expectation, therefore, is that the rhetoric toward China should weaken somewhat after the November US elections―especially if the Republicans do well.

The pressure on its European allies seems to have softened already after Trump’s meeting with Juncker. We might see negotiations with the EC on lower tariffs. That would allow Trump to show his constituents that he is achieving results.

All this, however, is speculation. And so investors should not be too impressed by the political noise. Much more important, we think, are any signals that might prompt uncertainty in the economy.

At the moment, sentiment indicators from the United States and Europe do not appear to show any dire warning signs. We’d expect sound growth is likely for the rest of this year and well into 2019.8 But today more than ever since the end of the financial crisis of 2007/2008, we think it is advisable to be a bit more cautious and not to take excessive portfolio risks.

All investments involve risks, including possible loss of principal. Stock prices fluctuate, sometimes rapidly and dramatically, due to factors affecting individual companies, particular industries or sectors, or general market conditions. Bond prices generally move in the opposite direction of interest rates. Thus, as prices of bonds in an investment portfolio adjust to a rise in interest rates, the value of the portfolio may decline. Special risks are associated with foreign investing, including currency fluctuations, economic instability and political developments. Investments in emerging markets involve heightened risks related to the same factors, in addition to those associated with these markets’ smaller size, lesser liquidity and lack of established legal, political, business and social frameworks to support securities markets.

1. Sources: Bloomberg; JP Morgan Currency Index, as of June 30, 2018. Indexes are unmanaged, and one cannot invest directly in an index. They do not reflect any fees, expenses or sales charges. Past performance is not an indicator or a guarantee of future performance. See www.franklintempletondatasources.com for additional data provider information.

8. There is no assurance that any projection, estimate or forecast will be realized.