Though carbon-based and not listed as a true “clean” energy source, natural gas has long been described as the “bridge fuel” to a cleaner energy future as the world weans itself off highly polluting coal and oil.

In our view, that bridge looks likely to extend well into the next decade, as more countries turn to natural gas in a bid to displace coal as the largest source of power generation. Moreover, long-term LNG supply additions appear to be slowing down after years of underinvestment and few recent project sanctions.

In 2016, natural gas supplied 22% of the world’s energy, and its use is growing.1 As the chart below shows, the International Energy Agency (IEA) projects natural gas to account for 25% of the global energy mix by 2040. 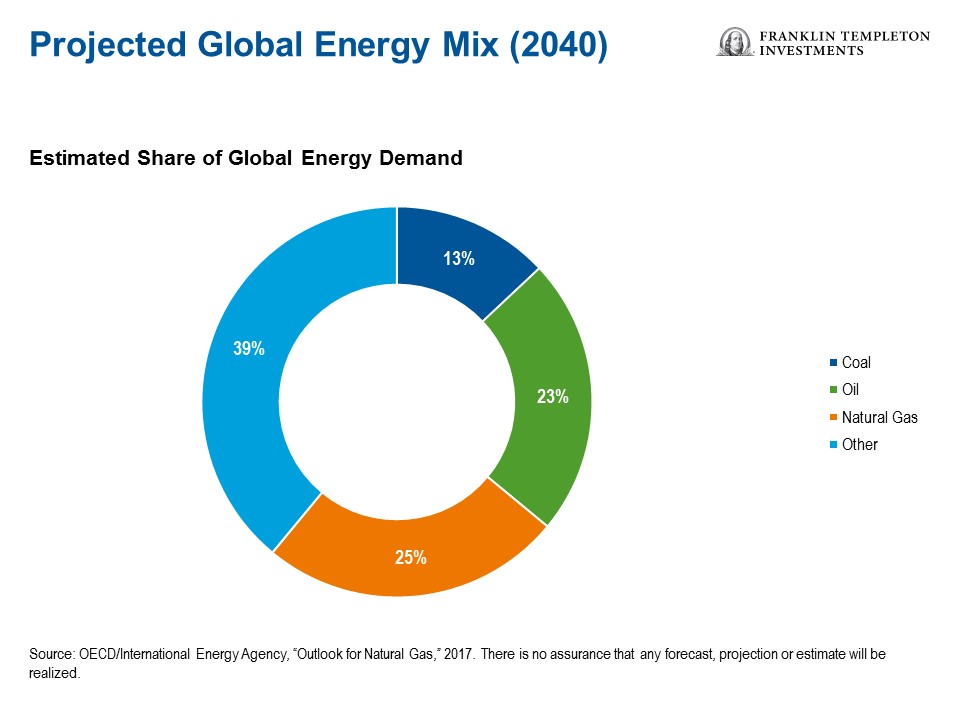 Why Demand for LNG Is Growing

In many parts of the world, constructing pipeline infrastructure to transport natural gas isn’t practical. In many countries outside North America, domestic production of natural gas is struggling or on the decline. That’s why we expect to see an increase in demand for LNG imports as countries pursue more natural gas-driven policies. The natural gas liquefaction process cools, condenses and transforms the gas into a commodity that can be ferried around the world in specialized compression tankers.

Meanwhile, LNG supply from new additions has been slowing down and could create a supply deficit in the next decade if LNG demand continues on its current growth trajectory. Since LNG projects require a five-year lead time to develop, global LNG could move into a tighter market for longer time frames before higher prices encourage more investment in new supplies.

The Outlook for US LNG

In the United States, LNG exporters are benefiting from rapid demand growth and the streamlining of federal permits for LNG plants, export facilities and LNG tanker ships. As of June 2018, many companies said they are finalizing investment decisions to build planned US LNG facilities.4

Construction has been underway on a wave of US LNG plants along the Gulf of Mexico coast. The first, at Louisiana’s Sabine Pass, began shipping LNG in 2016, and Cove Point terminal in Maryland just started this year, while others are scheduled for completion through 2020.5

In 2017, China was the third-largest destination for US LNG exports, behind Mexico and South Korea.6 The country’s demand for LNG is expected to continue growing rapidly as the Chinese government moves to limit air and water pollution from the combustion of coal. Coal, which accounts for about a third of global carbon dioxide emissions, currently dominates China’s total energy consumption (at about 70%) and electricity production (at nearly 80%).7

However, the escalating trade dispute between the US and China casts a shadow over those plans―at least in the short term. In August, China threatened to impose a 25% tariff on US LNG, which, if imposed, could make US LNG more expensive to Chinese buyers.8 However, given the lack of near-term supply sources which are not already contracted, the US remains a likely supplier of LNG to China, even with a tariff, given the wide spread between US and Chinese prices.

For now, US LNG exports account for a small amount of US natural gas demand, thus there has been minimal impact on US natural gas producers. Though if the tariff conflict were to continue for longer, it could eventually diminish one long-term export opportunity for US producers. That said, there appears to be growing opportunity in Europe for US LNG as the continent struggles to balance its demand needs with overdependence on Russian natural gas pipeline supplies.

All investments involve risks, including possible loss of principal. Stock prices fluctuate, sometimes rapidly and dramatically, due to factors affecting individual companies, particular industries or sectors or general market conditions. Investing in a fund concentrating in the natural resources sector involves special risks, including increased susceptibility to adverse economic and regulatory developments affecting the sector. Growth stock prices may fall dramatically if the company fails to meet projections of earnings or revenue; their prices may be more volatile than other securities, particularly over the short term. Smaller companies can be particularly sensitive to changes in economic conditions and have less certain growth prospects than larger, more established companies and can be volatile, especially over the short term. The fund may also invest in foreign companies, which involve special risks, including currency fluctuations and political uncertainty. These and other risks are described more fully in the fund’s prospectus.