A little over 10 years ago, few people had heard of mortgage-backed securities (MBS). Yet that changed when MBS brought the global financial system to its knees. Today, they’re still a pivotal part of the system, with the US Federal Reserve (Fed) the largest holder. Franklin Templeton Fixed Income Group’s Paul Varunok explains how MBS fit into the Fed’s future plans and gives his outlook for the asset class.

Ten years ago, the United States was in the depths of a financial crisis that is still a sensitive topic for many borrowers who lost their homes and for many investors who saw their portfolios fall as the crisis spread across the globe.

Before the crisis, the United States hadn’t experienced a national housing correction in at least four decades.1 Many groups, including homeowners, mortgage originators and credit rating agencies, seemed to discount the possibility that home prices would fall.

In addition, not much attention had been paid to the risks of subprime lending or the mortgage-backed securities (MBS) backed by subprime loans before the crisis. Then, mortgage delinquencies and foreclosures rose, and home prices and MBS began to fall.

MBS are bonds that represent an ownership interest in a pool of residential mortgage loans. Homeowners make mortgage payments that are ultimately pooled each month and then “passed through” to MBS holders in the form of principal and interest cash flows.

MBS are classified as either agency MBS or non-agency MBS.

Within agency MBS, the primary risk to investors is prepayment risk. Typically, when interest rates fall, homeowners refinance their mortgages to secure a lower rate in order to achieve lower monthly payments. As a result of such refinancing events, mortgages are paid off prior to maturity and the MBS investors are confronted with reinvesting that money at a lower prevailing interest rate.

In contrast, non-agency MBS are issued by private entities, such as financial institutions. They are not guaranteed by the US government or any of the three government-sponsored agencies, and therefore carry a level of credit risk not present in agency MBS.

Non-agency MBS include the subprime, non-prime and private-label MBS that gained notoriety during the 2008 financial crisis. In the years leading up to the crisis, the non-agency MBS market grew rapidly and the securities provided a way for homebuyers deemed less creditworthy to gain financing.

However, as mortgage delinquencies increased, non-agency MBS fell in value. As mortgage financing leverage was not solely held in the non-agency MBS market, the contagion spread to higher-quality securities, including prime MBS, though the losses were far lower in comparison.

How the Fed Became the Largest Holder of MBS

For decades, Fannie Mae and Freddie Mac were the largest holders of MBS. However, that began to change in 2008, when mortgage lending tightened during the housing crisis. In September of that year, Fannie and Freddie were put in conservatorship and mandated by the Federal Housing Finance Agency to wind down their private investment portfolios of MBS.

To offset a slowdown in lending and stabilize the housing market, the US Federal Reserve (Fed) began its quantitative easing (QE) plan. In November of 2008, the Fed started buying $600 billion in MBS. Over the following years, the Fed increased its holdings in MBS and US Treasuries, as the chart below shows. 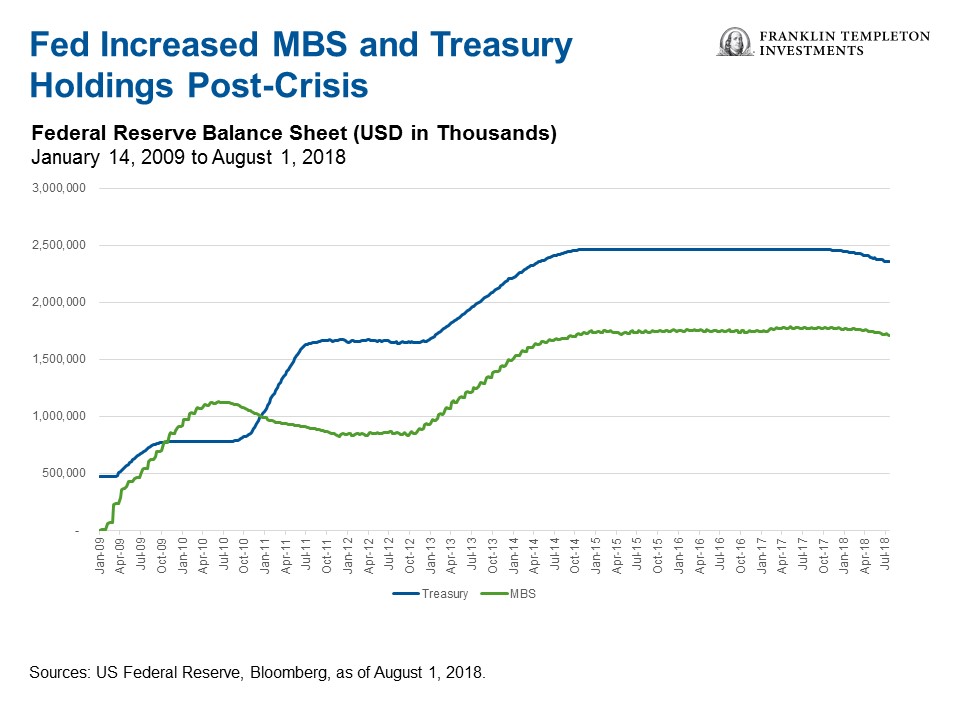 Due to this buying, the yields on MBS and Treasuries fell, which helped put a floor on housing prices by effectively lowering long-term interest rates and thereby making mortgages more affordable for homeowners. Over time, these purchases led the Fed to surpass Fannie and Freddie as the largest owner of US MBS.

In recent years, the US economy has been on an upswing, partly due to home prices that have recovered to pre-crisis levels, as the chart below shows. 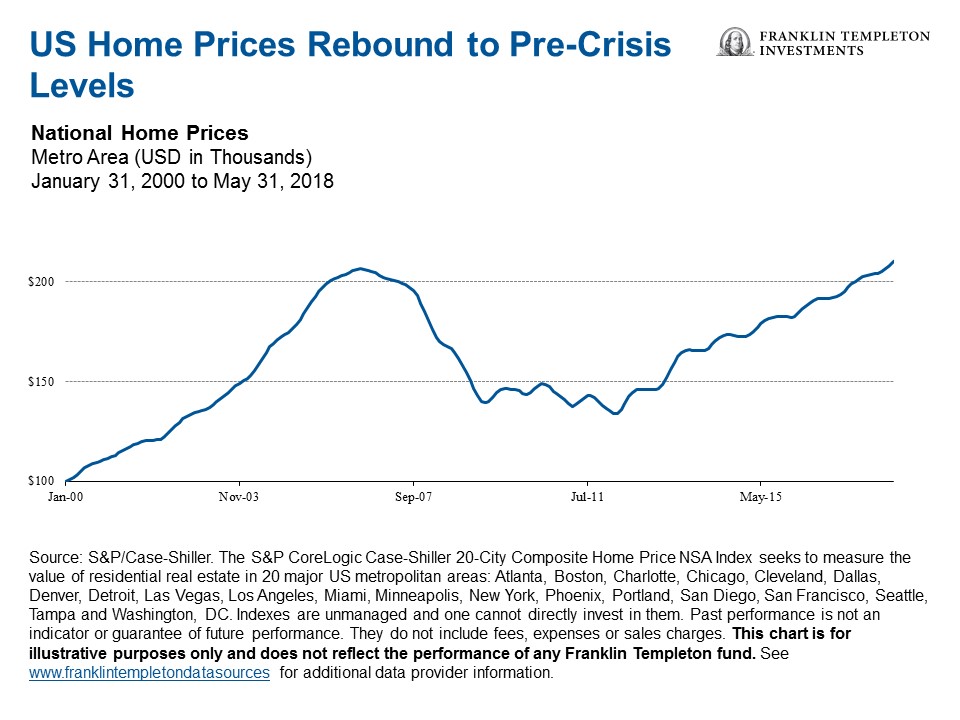 The Fed’s Plans for its MBS

As the US economy has improved, the Fed has taken steps to normalize its monetary policy. In 2014, the Fed announced the end of QE, when its balance sheet reached about $4.5 trillion of MBS and Treasuries. Then, in 2017, it began reducing the reinvestment of the principal payments it received for expiring agency MBS when payments exceeded certain levels.

In September 2018, we expect to see about $6 billion in reinvestment of MBS principal, compared with about $30 billion a month at the beginning of 2018. And, in October 2018, the Fed has announced that it plans to stop reinvesting the proceeds.

To be clear, the Fed isn’t selling MBS; it’s allowing its holdings to gradually decline. The Fed currently owns roughly 1/3 of the agency MBS market, worth about $1.7 trillion. Since the Fed has said it has no plans to sell MBS, we expect the Fed’s holdings of MBS to decline about 10% a year due solely to this reduction and eventual end of reinvestment.

As the Fed stops buying, we expect that will leave a greater supply of MBS for the market to absorb. Now, the question is, who’s going to be the marginal buyer of MBS?

US banks, the second-largest contingent of agency MBS ownership, have always been a presence in the market. We believe they’ll continue to buy and hold agency MBS due to favorable capital requirements.

Money managers are typically the third-largest owners of MBS. We think mortgage spreads (the spread between mortgage interest rates and Treasury yields) will likely need to move higher to entice money managers to purchase more MBS. That, in general, means prices are likely to fall.

However, our view is buffered by higher interest rates. Higher interest rates typically mean it’s less affordable to create new credit for borrowers. In addition, prepayments generally slow when rates rise, so there’s less supply for the market to absorb.

So, we think it’s kind of a balancing act. We expect spreads might widen marginally but we’re not expecting mortgages to sell off drastically. In general, we think they could perform in line with to slightly better than US Treasuries. Typically, MBS have higher income than Treasuries, as investors must be compensated for the prepayment risk component; though with only a small portion of the MBS universe currently refinanceable, prepayment risk remains low.

All investments involve risks, including possible loss of principal. The price and yield of a MBS will be affected by interest rate movements and mortgage prepayments. During periods of declining interest rates, principal prepayments tend to increase as borrowers refinance their mortgages at lower rates; therefore MBS investors may be forced to reinvest returned principal at lower interest rates, reducing income. Bond prices generally move in the opposite direction of interest rates. A MBS may be affected by borrowers that fail to make interest payments and repay principal when due. Changes in the financial strength of a MBS or in a MBS’s credit rating may affect its value. 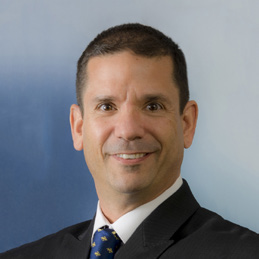