The US Federal Reserve (Fed) raised its benchmark short-term interest rate for the third time this year,  which was no surprise to most market participants. Chris Molumphy, chief investment officer, Franklin Templeton Fixed Income Group, offers his take on the Fed’s “normalization” path in light of what he sees as an overall positive US economic backdrop.

The September US monetary policy meeting held few surprises as the Federal Reserve (Fed) continued its path of normalization, increasing its benchmark rate (the fed funds rate) 25 basis points for the third time this year, to a range of 2% to 2.25%. The Fed also updated its monetary policy and economic forecasts, which reflect a generally positive economic backdrop.

The most media attention seemed to focus on the Fed’s removal of the word “accommodative” in its official statement in regard to its stance on monetary policy. At the post-meeting press conference, Fed Chair Jerome Powell essentially said that language was no longer needed given the state of the economy and it does not signal any change in terms of the gradual tightening path the Fed has been on.

“Our economy is strong. Growth is running at a healthy clip. Unemployment is low. The number of people working is rising steadily. Inflation is low and stable,” he said, adding “It’s a particularly bright moment for the US economy.”

Looking at the Fed’s forecast and commentary, I wouldn’t read much into the removal of the “accommodative” language in the sense of any change in the trajectory of rate hikes the Fed has outlined going forward. It seems pretty clear they will continue to tighten.

The Fed’s actions and language reflect robust US economic fundamentals. US gross domestic product grew 4%+ (year-over-year) in the second quarter, and growth appears to have continued at a robust pace in the third quarter given employment data and other broad economic indicators.

Given this good fundamental backdrop, we think it’s healthy for the Fed to continue the gradual tightening path it has been laying out for some time now.

The market has taken rising rates in stride and has been able to shake off a number of uncertainties over the past few months, including tariffs, emerging-market volatility and the run-up to US midterm elections in November, which could shift the makeup of Congress.

The market’s behavior seems to be indicating it cares more about the fundamentals—namely the economy and corporate profits—than these unknowns. To a large degree, the Fed has concurred. While Fed policymakers have discussed these potential risks, they aren’t making any assumptions about them when it comes to their forecasts. Here are the latest projections:

The latest “dot plot” from the Fed is still showing a fairly aggressive tightening path. The market still seems a bit skeptical that interest rates will actually move as high as the Fed has indicated to be its normal or neutral rate of around 3%.

We continue to view the Fed’s normalization of rates as a positive and the biggest market risks are probably non-fundamental ones. The United States is pretty far into its current economic expansion cycle, and it is prudent to have a lot of ammunition at the end of the cycle to be prepared for the next recession.

The United States has only seen one other cycle as long as 10 years since World War II. With the fed funds rate up at least to its neutral rate, the central bank has more flexibility to stimulate the economy if necessary. In Europe or Japan, policy rates are still at or near negative and they haven’t ended quantitative easing from the last downturn, which is worrisome. While we don’t anticipate an economic downturn in the near term, we do know that it will happen eventually. 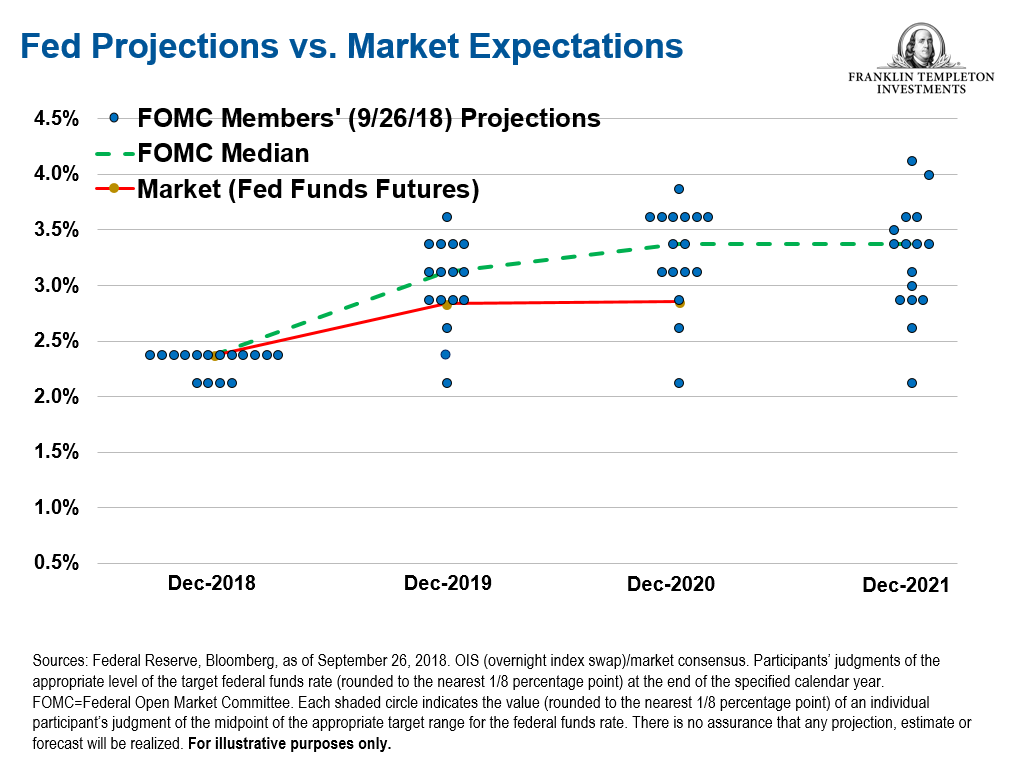 When asked about the impact of recent trade/tariff concerns on the economy, Powell said on aggregate, the impact on the US economy’s performance hasn’t been significant, but loss of business confidence is a worry.

“We have been hearing a rising chorus of concerns from businesses all over the country about disruption in supply chains, materials costs increases and loss of markets….The tariffs might provide a basis for companies to raise prices in a world where they’ve been reluctant.”

Powell also added that they didn’t currently see such price increases showing up in the data.

So, we think the Fed views tariffs as a one-off risk, but there has to be more turmoil to have an impact on the economy. The Fed is making it clear they are aware of the potential impact, but aren’t currently setting policy based on it.

While this is something we are watching, in our view, the predictive power of the yield curve may not be as powerful as it has been in the past, because in this era of global quantitative easing, central banks are acting on the markets in an untraditional way. They have been purchasing significant volumes of securities, which has impacted their prices. That means there are non-fundamental forces at work.

In our view, the pace of Fed interest rate hikes has been normal and healthy at this point of the economic cycle. We think the markets should be able to take this policy normalization in stride.