Renewable energy has been gaining steam for many reasons, as have the investment opportunities in the space. Ketul Sakhpara, portfolio manager and research analyst, Franklin Real Asset Advisors, outlines the three main drivers of interest, and where his team sees potential. You might be surprised to learn how emerging markets in particular are ramping up renewable energy.

Generating energy from renewable sources offers a number of benefits, including reducing our dependence on fossil fuels and diversifying our fuel sources. At the same time, it offers local governments a boost from associated property taxes which help fund schools, parks and emergency services like firefighters and police.

Most renewable power plants are built after a fixed-price power purchase agreement (PPA) is signed for 10-20 years with a utility or a government-owned entity. Some PPAs also have inflation-linked revenue escalators. This eliminates most of the risk to the top line of the investment.

Moreover, solar and wind power plants have very low operational and maintenance costs and zero fuel costs compared with conventional power plants such as coal, gas or nuclear. This can shield customers from unpredictable future power price increases and is a significant benefit for investors, since it eliminates the remaining major risk factors on returns from an investment in power plants. Hence, we think the renewables space is very well suited for infrastructure investors.

There are many factors driving renewable investments, but we see three main ones.

Each of these individual drivers is supportive, but when the effects of all three are combined, we think the impact is exponential. On the investment side, we rarely see such a confluence of factors. When the world’s largest economy is in the process of changing its source of fuel for power production, the potential opportunities are great in our view. 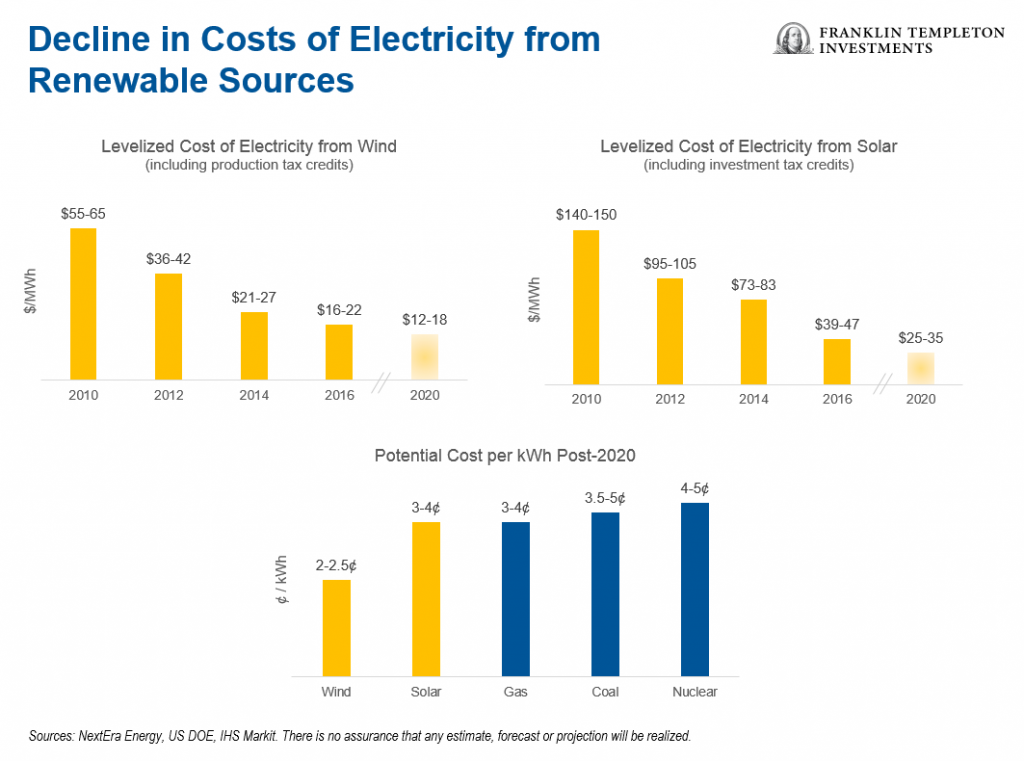 Solar and wind power is currently at parity or even cheaper in terms of cost in most parts of the United States when compared with conventional fuel sources such as gas, coal and nuclear power.

States have been mandating expanding use of renewables, which is the second driver of growth. California currently produces about 30% of its consumed power from renewables, but has a mandate to produce 50% of its electricity from renewables by 2030.3 The state plans to be 100% carbon-free by 2045.

Among Europe’s largest economies, 36% of Germany’s power consumed was produced from renewables in 2017 and that number was about 30% for the United Kingdom.5 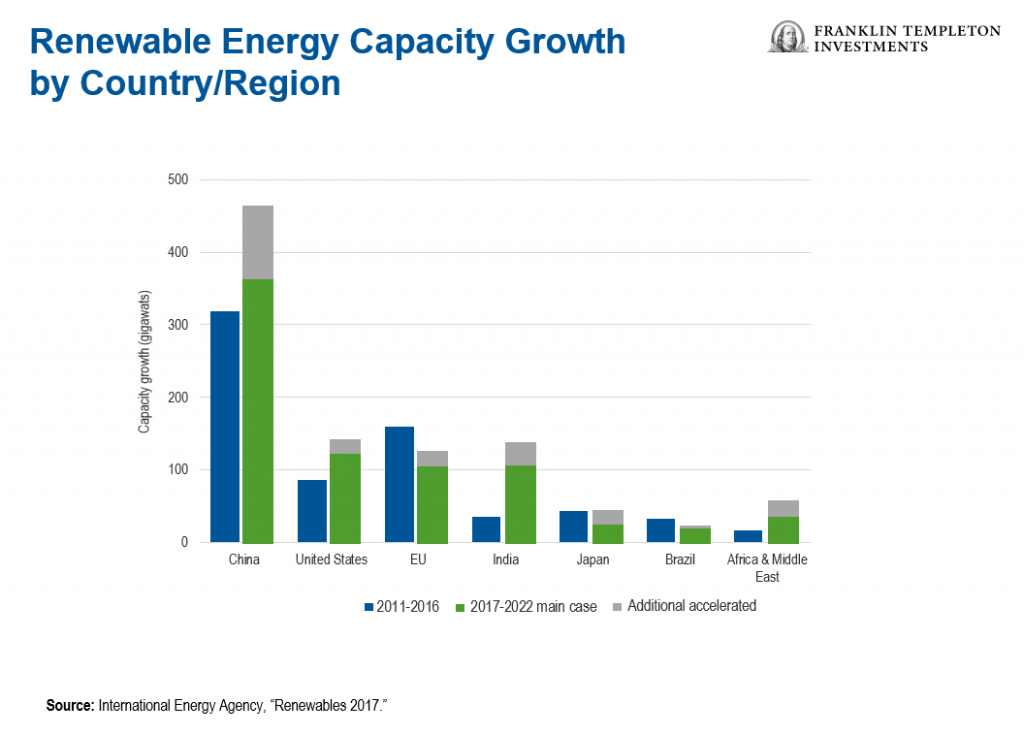 Concerns about air pollution have driven a push toward renewable energy in China. Its 13th Five-Year Plan targeted a 20% renewables goal by 2030, but there are some reports that China’s National Development and Reform Commission may be increasing the goal.

India started this decade with almost no presence in renewables but is now on a path to 220 gigawatts (GW) of renewable capacity by 2022.6 Based on the auctions conducted and capacity added over the last two years, we do think this target is achievable.

According to the International Energy Agency, three countries—China, the United States and India—will account for two-thirds of global renewable expansion to 2022.7

The third driver for renewables is the social push for sustainable living. My two children are just 8 and 6, and they actually forbid me from eating sushi with disposable wooden chopsticks. There is so much emphasis on sustainable development from future voters (including kindergarteners!) that this trend seems unlikely to slow down. Combine this with lower costs and regulatory support, and you have long-term momentum.

Newton’s third law states that for every action, there is an equal and opposite reaction. So, as renewables gain popularity, traditional producers that generate power from coal and nuclear—especially the merchant power producers in the United States and Europe—have suffered. As investors, we have largely avoided those power producers.

On the other hand, as renewable power prices decline, the cost benefits are passed on to consumers in the form of lower utility bills. We don’t like investing in the renewables value chain where the business is commoditized, such as renewable power asset owners. We prefer to invest in developers—offshore wind for example—or energy providers who are the beneficiaries of lower prices.

Another area of interest to us is gas pipelines and related infrastructure. Renewable energy is inherently unpredictable—the wind may not blow or the sun might not shine on a given day. So, typically it is combined with gas power, which can be switched on and off on a short notice of say 15 minutes when needed. Coal plants could take 2-3 days to start, and nuclear startup time is in months.

As renewables grow, we expect gas power plants to complement renewables for reliability. Consequently, we also find investments in gas infrastructure throughout the world attractive as a complement to renewables. Overall, we see more potential opportunities in this space and are excited about what the future may hold.

All investments involve risks, including possible loss of principal. Stock prices fluctuate, sometimes rapidly and dramatically, due to factors affecting individual companies, particular industries or sectors or general market conditions. Investing in a fund concentrating in the natural resources sector involves special risks, including increased susceptibility to adverse economic and regulatory developments affecting the sector. Growth stock prices may fall dramatically if the company fails to meet projections of earnings or revenue; their prices may be more volatile than other securities, particularly over the short term. Smaller companies can be particularly sensitive to changes in economic conditions and have less certain growth prospects than larger, more established companies and can be volatile, especially over the short term. Investing in foreign companies involves special risks, including currency fluctuations and political uncertainty. Investments in foreign securities involve special risks including currency fluctuations, economic instability and political developments. Investments in emerging markets, of which frontier markets are a subset, involve heightened risks related to the same factors, in addition to those associated with these markets’ smaller size, lesser liquidity and lack of established legal, political, business and social frameworks to support securities markets.

2. There is no assurance that any estimate, forecast or projection will be realized.

6. Source: Government of India, Ministry of New and Renewable Energy. There is no assurance that any estimate, forecast or projection will be realized.