In the past few months, equity investors have had to cope with something they hadn’t experienced for a while—volatility. While the ups and downs can be unsettling, volatility can also create opportunities for long-term investors. Stephen Dover, our head of Equities, takes a look at where he sees them emerging and breaks down the root causes of the recent market turmoil.

The markets hate uncertainty, and today we certainly have plenty of it. From a tumultuous Brexit process in the United Kingdom, to US-China trade tensions, to fears about slowing global economic growth, it’s not a surprise that some investors are a bit unnerved these days.

While there are many variables contributing to the current equity market volatility, we think the primary underlying issue is the unraveling of the decade-long stimulative effects of global central banks.

In the wake of the global financial crisis a decade ago, central banks across the globe took unconventional measures to stimulate their economies—including the large-scale asset purchases known as quantitative easing (QE). The purpose of the QE was not only to stimulate the economy, but to also help inflate financial assets—particularly equities and real estate—to create a wealth effect. This “wealth effect” has typically caused investors who have owned these assets to feel better about their financial health. In turn, they would then go out and spend, which would then lead to more demand for goods and services.

In addition to fixed income instruments, many central banks (including Japan, and parts of Europe—notably Switzerland) added equities to their balance sheets, which, for the most part, accomplished the intended stimulative effects. At some point, however, those purchases need to be sold back to the public, putting downward pressure on their equity markets.

The US Federal Reserve is the first major central bank to begin unwinding from the post-crisis QE monetary experiment and moving toward a “normalized” monetary policy approach of raising short-term interest rates. It began shrinking the size of its balance sheet in 2017, letting fixed income securities mature without reinvesting the proceeds.

In our view, the success of normalized monetary policy is still uncertain and will likely lead to continued volatility in the markets for the foreseeable future. With higher interest rates, greater volatility and uncertainty in the equity markets, cash is now becoming a viable investment choice.

Globally, we expect to see repricing of money and financial assets to continue as the unorthodox monetary policy many central banks have pursued unwinds, albeit in some regions faster than others and on different levels. 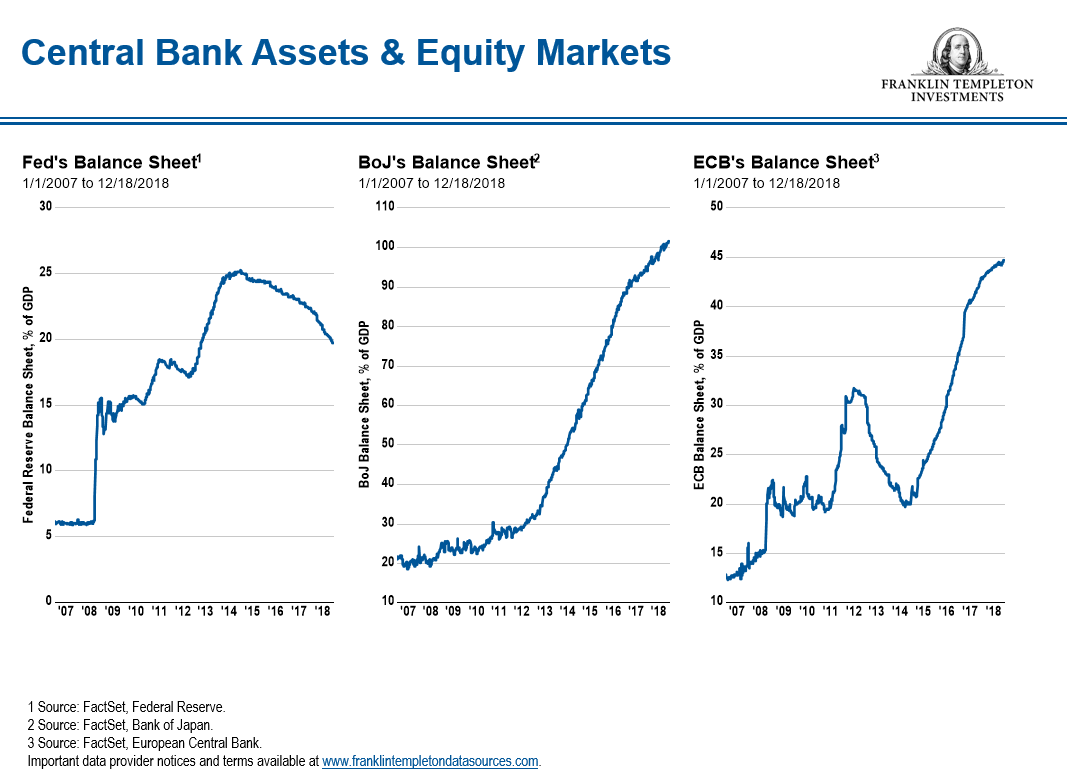 As we head into the new year, we are positioning our portfolios for what’s likely to be a rising interest-rate environment. In general, our portfolio managers are avoiding high-debt companies while targeting companies where we expect strong cash-flow generation. Equities have historically been able to perform well in rising-rate environments if the rise is expected and not too rapid to allow companies to adjust for them.

We are not trying to predict or time a recession, but we do think we are late in the economic cycle—now heading into its 10th year in the United States. There’s a popular adage, “bull markets don’t die of old age,” and we would agree that age of the economic expansion—or the US equity market’s bull run— alone isn’t really a concern in and of itself. A recession is a decline in economic activity. This can occur when the cost of money increases or when inflation rises significantly, leading to an increase in the cost of money as central banks raise rates. 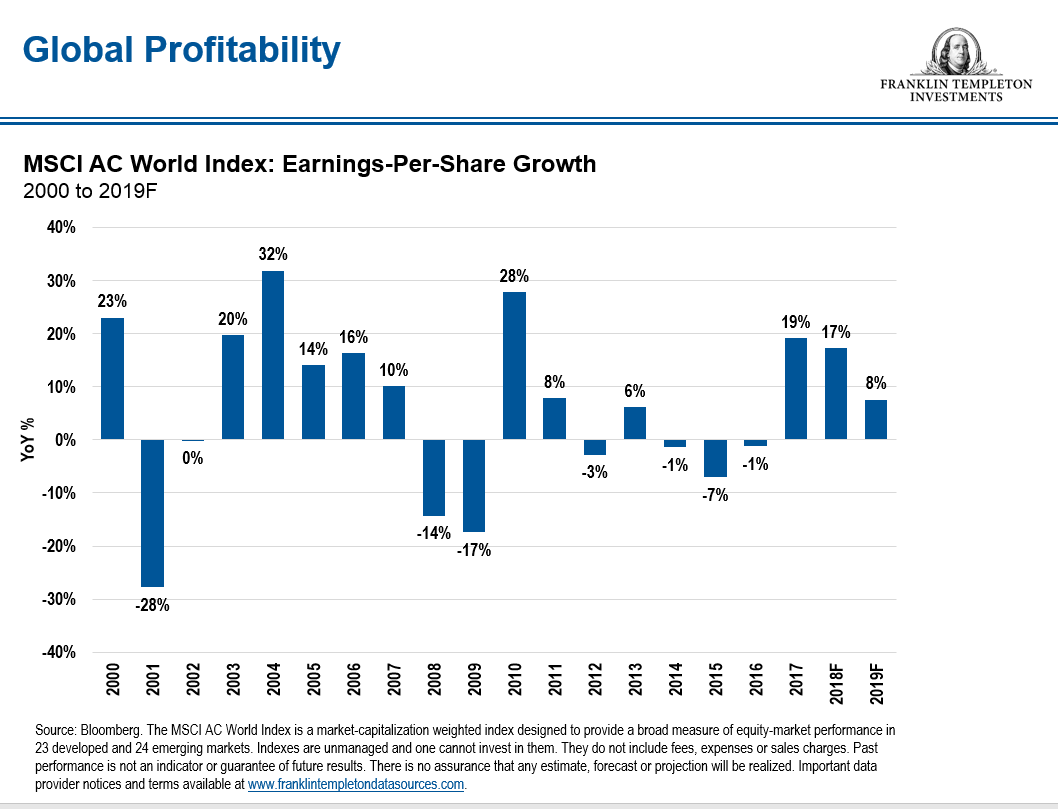 One challenge ahead that we see relates to the fiscal deficits of many countries, which will be under strain and limit future stimulus. The world is now actually deeper in debt than it was at the previous market peak in 2009. Global debt reached a record peak of $164 trillion in 2016, equivalent to more than 200% of global gross domestic product (GDP), and recent reports have shown it has continued to rise.1

Adding pension and health care liabilities to these ratios essentially doubles these figures.

Large amounts of debt need to be refinanced in the next few years; rising interest rates also mean rising borrowing costs for both businesses and consumers.

Why We Think a Recession Isn’t Likely in 2019

The current outlook for GDP growth from the International Monetary Fund (IMF) and others is slower than that for 2018 but still positive, and as stated previously, we don’t see a global recession ahead in 2019. The good news in our view is that by raising rates and unwinding their balance sheet, the central banks will have more tools available to manage a future recession.

We do have some concern about global financial and monetary institutions and their ability and willingness to respond to future crisis. Political populism—which we are seeing across the globe today—weakens civil institutions. Populists are increasingly able to influence the policy agenda in and around Europe, and European national elections are scheduled in seven member countries in 2019.

That said, both growth and value investment styles can be well-positioned for the likely future scenarios. The outlook for corporate earnings growth looks positive, as does the outlook for global economic growth in 2019.4 We believe our portfolio managers are taking on an appropriate level of risk where they have the potential to be rewarded in the current environment, while being cognizant of the possibility of any unexpected shocks.

Given the recent market correction, stocks in general are more reasonably priced. We think that in times of volatility and uncertainty, active management can really shine. 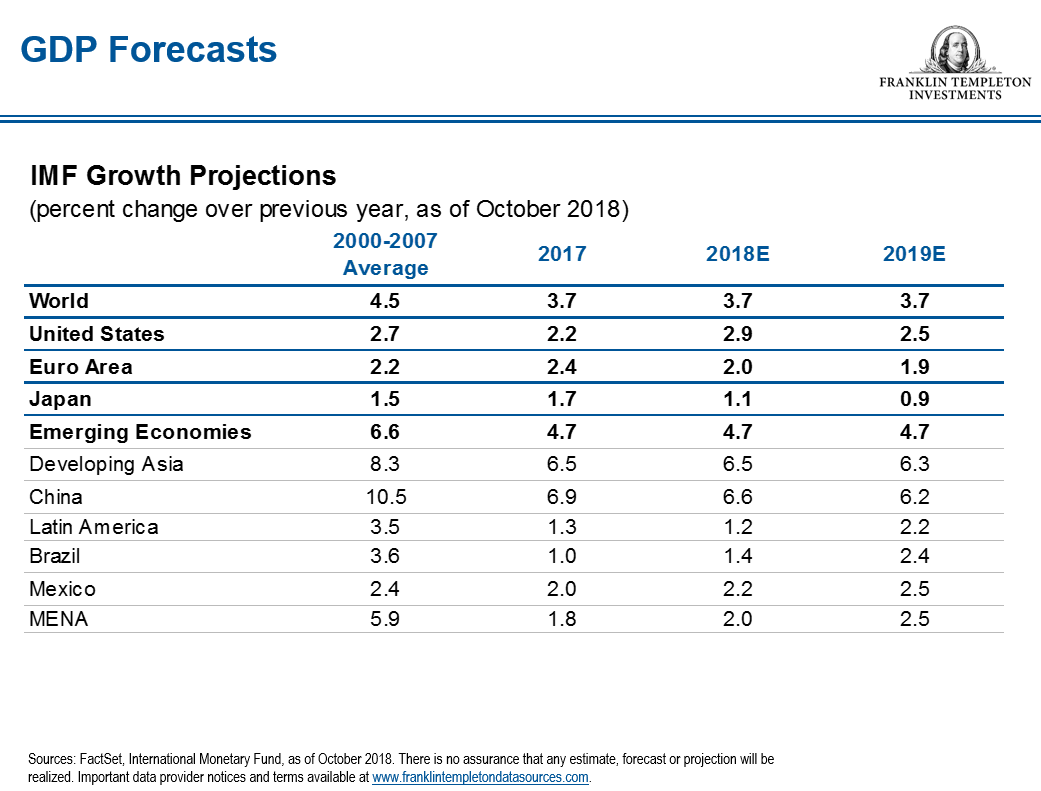 All investments involve risks, including possible loss of principal. Stock prices fluctuate, sometimes rapidly and dramatically, due to factors affecting individual companies, particular industries or sectors, or general market conditions. Bond prices generally move in the opposite direction of interest rates. Thus, as the prices of bonds adjust to a rise in interest rates, the share price may decline. Investments in foreign securities involve special risks including currency fluctuations, economic instability and political developments. Investments in emerging-market countries involve heightened risks related to the same factors, in addition to those associated with these markets’ smaller size, lesser liquidity and lack of established legal, political, business and social frameworks to support securities markets. Such investments could experience significant price volatility in any given year.

4. There is no assurance that any estimate, forecast or projection will be realized.