Two and a half years after the United Kingdom voted to leave the European Union, it’s finally entering the end-game but with no clear idea of the outcome. At this point, David Zahn, Franklin Templeton Fixed Income Group’s head of European Fixed Income, believes financial markets are crying out for an end to the uncertainty, even if that means accepting the short-term pain of a Hard Brexit.

We have long argued that the best Brexit scenario would be a deal between the United Kingdom and the European Union (EU) governing post-divorce trade, and we continue to believe that. But after today’s UK Parliamentary vote that seems all but impossible, given the tight timeline.

UK Members of Parliament voted overwhelmingly to reject the withdrawal agreement proposed by Prime Minister Theresa May. The EU, however, has said it is not prepared to offer further concessions.

Meanwhile, the clock continues to countdown towards the March 29 leaving date.

As we see it there are only three possible options for the UK government to resolve the impasse.

Although a number of opinion polls recently have suggested that UK voters now favor remaining in the EU, there seems to be no majority in the UK House of Commons to reverse Brexit.

If Article 50 were rescinded we’d foresee a very positive response from financial markets, both in the United Kingdom and across Europe. Bond markets would likely sell off, sterling would rally and UK equities would probably go up. But this seems to us the least likely option.

The second option—extending negotiations—seems to us to be the most likely outcome. But it brings with it more uncertainty.

Any extension has to be agreed unanimously by the other EU members. We’d expect some of them to seek particular concessions before agreeing. Plus, we’d question whether there’s enough time before March 29 to secure approval from 27 different parliaments.

Some rumors from Brussels suggest any extension would be limited, perhaps only until the summer. The two sides have been negotiating for two years and haven’t reached an agreement, so we’d question how much a two-month extension would change things.

In addition, we recognize that markets don’t like uncertainty; extending Article 50 prolongs the uncertainty. 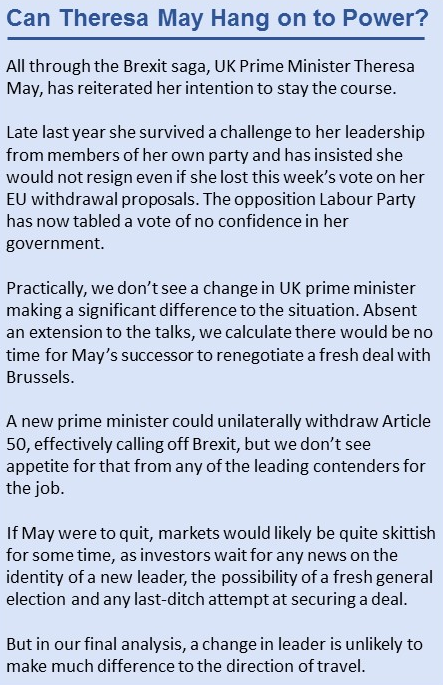 We estimate the chances of no-deal Brexit at around 30% to 35% currently.

The impact of such an outcome would be significant, but we don’t think a Hard Brexit would necessarily be the end of the world. In many ways, it could offer the quickest route to the certainty that markets crave.

A no-deal Brexit would likely mean heightened levels of uncertainty for three to six months as things get worked out. In many areas, the EU has said it will extend the status quo ante for the next year while the two sides adjust to the new environment.

The initial response would likely be negative: we’d expect bond markets to rally significantly; gilts would probably revisit their historic lows. But our perception is that if a Hard Brexit were confirmed, things could only get better.

Many investors we encounter already think sterling is undervalued but are put off buying because of the uncertainty surrounding Brexit.

A Hard Brexit would likely prompt a decline in sterling, but we think subsequently a lot of people would step in to buy it attracted by the even lower levels.

Under a no-deal Brexit, the United Kingdom would be governed by World Trade Organization (WTO) trading rules, including WTO trade tariffs, which tend to be more onerous than tariffs in negotiated trade deals.

However, the United Kingdom does have the option of not applying those tariffs on imported goods. The UK runs a large trade deficit with other countries, so post-Brexit it will be important to keep goods flowing in to avoid the shortages that some commentators are worried about.

There’s no guarantee that removing import tariffs would be reciprocated by other trading partners, but it should maintain a flow of goods into the UK. Furthermore, any successful trade negotiation that the UK was able to complete would improve its trading conditions.

For businesses, confirmation of a Hard Brexit would bring certainty. Exporters would have some certainty on the extent of tariffs to be levied on their goods. But we’d expect sterling to fall which should make their goods cheaper for overseas buyers and offer some support.

The immediate response to confirmation of a Hard Brexit would likely be extremely negative: The Bank of England’s Monetary Policy Committee may respond.

We would expect the central bank to err on the side of being more accommodative. It could even consider restarting its quantitative easing program.

The Impact on Europe

One area that has received little consideration is the likely impact of Brexit on Europe.

Of course, Brexit will impact the United Kingdom the most, but we estimate EU growth could be hit by around 0.2  to 0.3 percentage points in the event of a Hard Brexit. In aggregate that may not seem much, but when the EU is only growing at 1.5% to 2% that represents a more sizable chunk.

So we believe there would be a strong motivation for the EU to move towards more normalized trading relations more quickly.

Two and a half years ago, with all the options for a negotiated Brexit on the table, a Hard Brexit seemed to be the worst-case scenario.

Now, markets may feel that it’s preferable to bring an end to the uncertainty and accept the short-term pain.