The longest-ever US government shutdown has finally ended—at least temporarily—while negotiations continue over funding of a US-Mexico border wall. While the government will be reopened at least until February 15, the economic implications of the shutdown and the potential for more disruption ahead has become a source of concern to many global investors. Stephen Dover, Head of Equities for Franklin Templeton, outlines some considerations investors should keep in mind.

The US government’s most recent shutdown ended after 35 days, but was still longer than any previous shutdown in history. We know the reasons why it occurred—President Donald Trump wants $5.7 billion in funds for a US-Mexico border wall, but Congressional Democrats are loath to grant that sum for this purpose. While the government has been reopened and furloughed workers will receive back pay, the border issue remains at an impasse.

The overall impact of the latest shutdown is not as big as the one in 2013, due to differences in its breadth; in 2013, the shutdown covered the entire federal government and affected more services.1

This time around, the shutdown seemed to be managed in a way that minimized the overall impact. One example of the containment is the Internal Revenue Service (IRS). A large part of the IRS was closed in 2013, but this time, Congress had directed the payment of tax refunds through a permanent appropriation. In addition, national parks remained open during the shutdown, whereas they were closed during the 2013 shutdown.

One area we have seen some near-term impact is with government agencies that regularly release a number of economic reports. Many statistics that feed investment or financing models have been on hold. For example, high-frequency economic indicators on gross domestic product, business investment, trade, and housing and construction from the Bureau of Economic Analysis and the Census Bureau haven’t been available as regularly as they usually are. That means we could have some data distortion going on even though the shutdown has ended, which could influence the way economic health is being reported.

We could see some distortion in employment readings, for example, particularly if the shutdown resumes in February. The 2013 shutdown began October 1 and was resolved by October 17, but the data calendar was impacted all the way through December. We would be concerned this could lead many to anticipate a recession is building sooner than the most recent economic data would indicate.

Over the long term, these data disconnects should reconcile, but near term, we could see more uncertainty about where the US economy stands until a firm spending deal is reached. The markets don’t typically respond favorably to uncertainty. That being the case, we could see heightened market volatility.

Congress had passed a bill to reimburse federal exempt employees for lost wages once the shutdown ends, but some contractors may not receive back pay at all (meaning there will be a permanent loss to them). Some may receive their paychecks as normal, depending on their contract. For people living paycheck-to-paycheck, a shutdown can severely impact their spending ability.

The shutdown has impacted general consumer confidence as well. One confidence survey, the University of Michigan Consumer Sentiment index, dipped to 90.7 in the January (preliminary reading) from 98.3 in December.

The shutdown has added uncertainty and therefore risk to the markets that is hard to predict. Uncertainty reduces investor and consumer confidence, and investors should require a greater return to take on that additional risk—so we could see some risk aversion should this uncertainty linger.

That said, US economic fundamentals remain strong in our view, so we don’t anticipate a US recession this year. However, another shutdown increases the risk and probability of a near-term recession. A prolonged shutdown could also increase costs for companies dealing with the impacts which could lower their corporate earnings, particularly for small businesses who depend on government financing or government workers who consume their goods and services. The Chairman of the Council of Economic Advisers Kevin Hassett has stated first-quarter economic growth could amount to zero if the stalemate were to continue.

We think investors should keep in mind that political uncertainty, while impacting consumer confidence, usually fades away without really impacting structural spending in the longer term. If the previous shutdown in 2013 is any indication, one can expect the economy to bounce back once government employees receive back pay and government operations return to normal. However, the longer a shutdown drags on the greater the uncertainty. 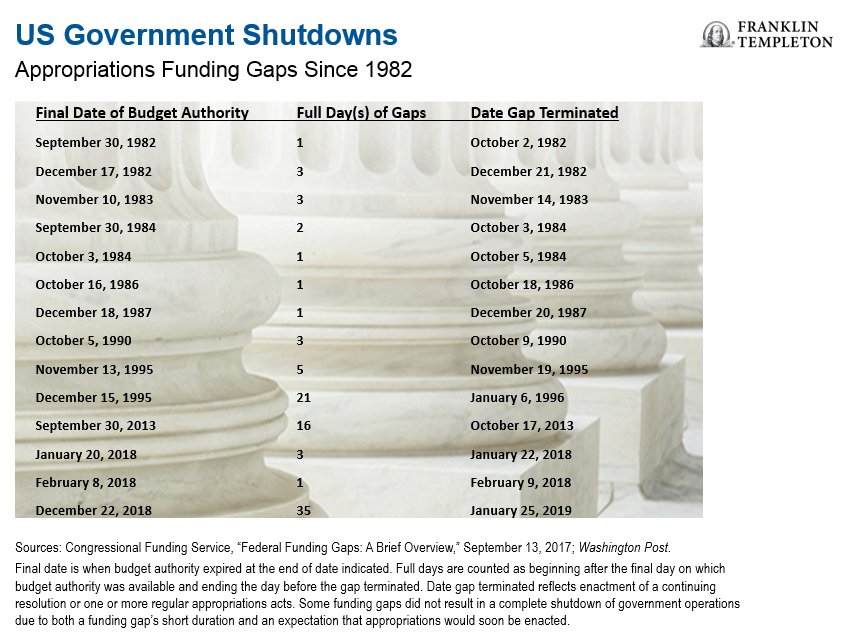 1. Source: Committee for a Responsible Federal Budget, “Q&A: Everything You Should Know About Government Shutdowns,” January 2019.