In economic (and political) circles, “Modern Monetary Theory” has gotten some buzz of late. What does it mean—and does it have any merit? Franklin Templeton Fixed Income Chief Investment Officer Sonal Desai thinks it’s not only potentially dangerous, but offers intellectual fuel for populism.

If you are tempted to learn more about MMT, be warned: there’s a deep rabbit hole of books and articles, and even Powell admitted that it’s hard to pin down exactly what MMT says. The New Economic Perspectives website offers a primer, but it runs 52 blogs long. Stephanie Kelton, a leading proponent, provides a clearer and concise summary in a recent CNBC video. (She is a professor of economics at Stony Brook University and was an advisor to Bernie Sanders’ 2016 presidential campaign.)

I think of MMT as a shape-shifter; it presents itself as a set of sensible principles, then morphs into dangerous policy ideas—which is why so many prominent economists now sound alarmed, rather than dismissive.

The basic tenets of MMT are that (1) the government has a monopoly over the issuance of national currency; (2) unlike households or companies, the government does not have a budget constraint; it can never run out of money to spend because it can print money; and (3) the only limit to the government’s spending power kicks in when it generates excessive inflation.

MMT proponents argue that government should set public spending and taxes to generate maximum employment and stable, moderate inflation. Most orthodox economists would agree. Stephanie Kelton argues, correctly, that if a government runs a significant budget deficit to invest in education, infrastructure, and research and development, it can boost long-term growth so that the debt it accumulates in the process will not be a problem. Again, most orthodox economists would agree.

But here is the shape-shifting: for MMT, public debt does not matter. At all.

MMT proponents note that Japan sustains a 240% of GDP (gross domestic product) debt with no inflation; they say that Japan teaches us a very important lesson, and they do not mean as a cautionary tale. (They are perhaps the only ones to see Japan as a model to imitate.)

Public debt-to-GDP ratios have already increased sharply across advanced economies over the last 15 years, with the notable exception of Germany. 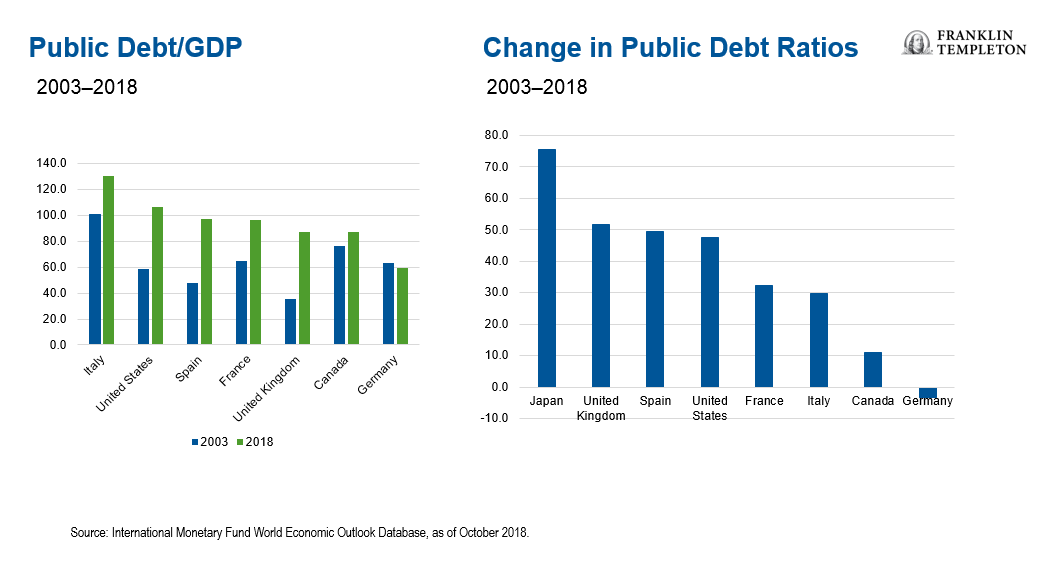 Should we worry about this? Well, large stocks of debt need to be rolled over, and new deficits need to be financed. That means a large supply of government bonds, which can crowd out private investment. Plus more government spending to pay interest on that debt.

Over the last several years, the cost of debt has been held down by quantitative easing (QE). Between 2008 and 2016, even as US public debt rose, the cost of servicing that debt declined. 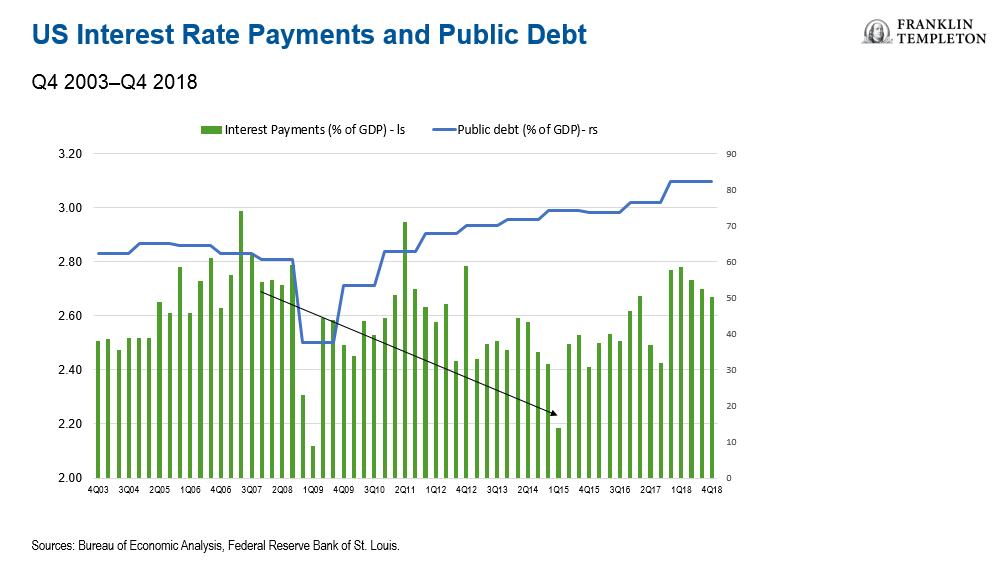 But that was an anomaly. Interest payments on the debt have already increased since then, and if interest rates rise further—as I expect—they will climb even more.

MMT advocates would say that does not matter either. You can let the deficit expand further and issue even more bonds. If investors’ appetite for government bonds weakens, you can have the central bank step in to finance the deficit.

That way, MMT can be used to justify any additional government spending. Universal free education and health care, a guaranteed income even for those unwilling to work, etc. They no longer need to be financed by higher taxes. They can be financed by issuing more debt, possibly supported by central bank bond purchases. After all, the government can never run out of money to spend—it can print it. As long as it does not cause inflation. But MMT proponents claim that inflation is not a serious risk for the US…ever. Stephanie Kelton argues in her video that “it’s really hard to believe” that excess demand for goods and services will ever cause an inflation problem in the US. So the government should spend with abandon, and the Fed should stand ready to finance the deficit.

One might object that the latest country to try that route was Venezuela, and it has really not worked out that well. MMT supporters will counter that the US is different because the US can print US dollars—unlike Venezuela, or anybody else for that matter. US dollars are the global reserve currency—they argue—and the rest of the world will always want more. Our spending, your problem—to paraphrase former US Treasury Secretary John Connally.1 They happily ignore that it was not always this way. It was the rest of the world that chose to adopt the US dollar as the global reserve currency after decades of growth-boosting, responsible policies made the greenback the stable currency of the strongest economy. If US policies change dramatically, the rest of the world could shift its preferences to other reserve currencies (a few competitors are already in the running). The notion that it’s the US’s choice to have the US dollar as the global reserve currency is profoundly mistaken.

If you think the only potential risk of excessive government spending is demand-driven inflation, and that will never happen again, then the only limit to public spending becomes a politician’s imagination on how to spend more money.

You then risk giving short-shrift to the supply side of the economy, and underestimating the damage that excessive government spending can do to incentives and resource allocation. The great benefit of a budget constraint is that it focuses the mind, forces you to think hard on where your money will be best spent.

This is where MMT becomes dangerous.

By arguing that the government does not have a budget constraint, MMT becomes intellectual fuel for populism.

In both the US and Europe, politicians have become increasingly prone to offering easy fixes and painless solutions: Leave the EU (Brexit); persuade the EU to let you spend more money, including on a “citizenship income” (Italy); keep out foreign workers and have the government provide free health care and education for all (US).

Populations, in turn, have become a lot more eager to embrace heterodox proposals and candidates.

Fear of adverse consequences has dissipated together with respect for the experts. QE did not fuel inflation, and Brexit did not trigger a recession, so who says we can’t have universal basic income and print our way to prosperity? There is no appetite to discuss difficult trade-offs and to accept that success in a more competitive global economy requires hard policy choices and structural reforms to boost innovation and productivity.

This presents two sets of risks that are very relevant to us both as citizens and as investors.

First, an unwillingness to tackle hard choices on education, infrastructure and public spending risks undermining the long-term growth potential of advanced economies—just when technological advances can help us boost productivity. This would have direct implications for financial assets’ performance, and it would heighten the geopolitical tensions that have already become a greater source of market volatility.

Second, as politicians and voters become complacent and ready to embrace out-of-the-box policies, the risk that something goes badly wrong rises exponentially. It could be a major sovereign debt crisis, a new financial crisis, a surge in inflation or a prolonged slump in a major economy. These are just tail risks; but as the distribution of policy proposals develops long and fat tails, then tail risks rise commensurately.

That’s why as investors we should worry about the rise of Modern Magical Thinking—just as Cochrane, Summers, Rogoff and Krugman do.

For US residents only.

Data from third party sources may have been used in the preparation of this material and Franklin Templeton Investments (“FTI”) has not independently verified, validated or audited such data. FTI accepts no liability whatsoever for any loss arising from use of this information and reliance upon the comments opinions and analyses in the material is at the sole discretion of the user.

1. Shortly after his appointment as Treasury secretary in 1971, Connally met a group of European Finance Ministers who expressed concern about the US exporting inflation to the rest of the world via the dollar. He famously replied, “The dollar is our currency, but your problem.”