The war of words between the Trump administration and China threatens to break out into a full-scale trade war. Franklin Templeton Head of Equities, Stephen Dover, considers the reaction of global investors and puts the current US stock market environment into perspective. And he considers some other issues that are contributing to markets’ cautious sentiment.

Recriminations and retaliations have dramatically escalated the trade tensions between the United States and China in recent days, creating volatility in global equity markets.

The situation has been exacerbated because markets had earlier priced in a short-term resolution to trade tensions on the back of emollient words from both sides in recent weeks. The escalation in tension into a potential full-scale trade war between China and the United States clearly creates uncertainty, but when we talk directly to management of companies in China, we feel more positive about the situation longer term. While we’re optimistic that there’s scope for some short-term negotiated settlement to this latest skirmish, that should be positive for the markets, it seems clear to us that there are long-term geopolitical issues between the two countries that have no short-term fix. As a result, we believe investors need to take a longer-term view on China and trade issues.

Changes in Global Markets and Their Impact on Equities

Uncertainty over China, and its influence over the fortunes of the US and global economies, is just one of the issues casting a shadow over investor sentiment. But we believe there are several reasons to continue investing in equities as corporate and economic fundamentals are generally holding strong. We view market volatility as a buying opportunity because we take a long-term view as investors.

China’s Role in the Global Economy

China has become such a large component of the global economic growth, so we think it merits individual consideration. Notwithstanding the tough line that the Trump administration is taking on trade, we think the outlook for China may be more positive than markets are suggesting.

While many observers fear a slowdown in China’s rate of economic growth, it’s important to keep in mind just how big its economy is, and how many tools the government there has to stimulate it.

Already this year there have been signs that the trade tensions with the United States were helping to focus the minds of policymakers and corporate leaders in China, prompting tax cuts and other fiscal liberalization measures.

The Chinese economy appears to be in a much more balanced place today than just a few years ago. It is more domestically oriented, which, in our view, makes it more stable and less vulnerable to external shocks.

It’s important to keep in mind that China has largely insulated itself from a dependence on foreign trade. Only 34.1% of its gross domestic product (GDP) today comes from foreign trade, compared with around 50% to 60% a few years ago.1 That percentage is roughly equivalent to a country like the United Kingdom. 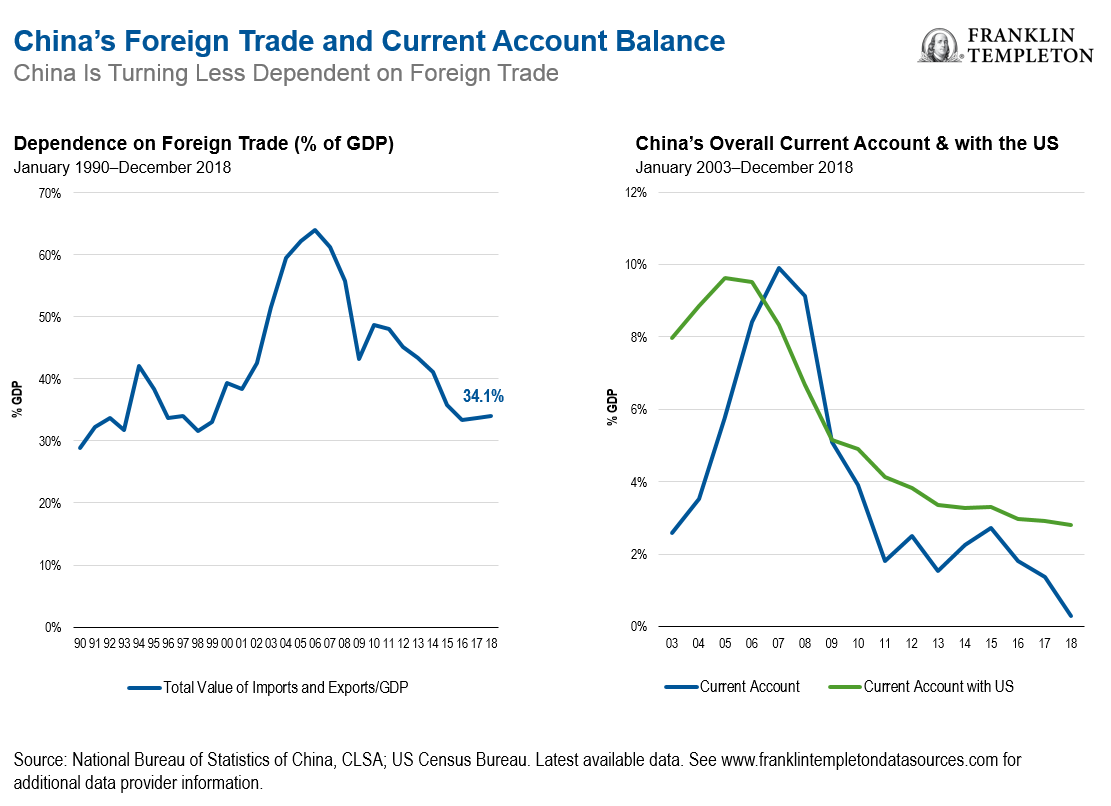 China has shown a formidable ability to innovate, spurred in part by the government’s research and development (R&D) push. China has actually overtaken developed markets such as the United States, Japan and Germany in terms of the number of patent applications filed in recent years.2

Across various industries, China has become the innovator to watch. For instance, rapid improvements in lithium-ion battery production have helped turn the country into the world’s largest electric vehicle market by both production and sales. In China’s pharmaceutical industry, government policies favoring the development of novel drugs over generics have encouraged local companies to scale up R&D expenditures. This could sow the seed for a pipeline of groundbreaking treatments from Chinese drug makers. These are just a couple of examples that highlight China’s pursuit of its own economic destiny independent of US and European manufacturers.

Uncertainty Prompts a Search for Alternatives to Chinese Suppliers

The fact that talks between US and Chinese trade representatives haven’t broken down completely despite the escalation in tensions (at least as of this publication date), gives us some hope that a compromise could be reached over these latest tariffs.

However, the entrenched attitudes on both sides will make it tougher to find agreements on the wider geopolitical differences. We expect further flare-ups in the future.

The uncertainty created by this situation can make it hard for businesses to make capital investment decisions; we think these trade negotiations will affect sourcing decisions for businesses for years to come. In our view, businesses looking to reduce this uncertainty will likely seek out local suppliers.

All investments involve risks, including the possible loss of principal. Investments in foreign securities involve special risks including currency fluctuations, economic instability and political developments. Investments in emerging markets, of which frontier markets are a subset, involve heightened risks related to the same factors, in addition to those associated with these markets’ smaller size, lesser liquidity and lack of established legal, political, business and social frameworks to support securities markets. Because these frameworks are typically even less developed in frontier markets, as well as various factors including the increased potential for extreme price volatility, illiquidity, trade barriers and exchange controls, the risks associated with emerging markets are magnified in frontier markets. Stock prices fluctuate, sometimes rapidly and dramatically, due to factors affecting individual companies, particular industries or sectors, or general market conditions. The technology industry can be significantly affected by obsolescence of existing technology, short product cycles, falling prices and profits, competition from new market entrants as well as general economic conditions. Smaller and newer companies can be particularly sensitive to changing economic conditions. Their growth prospects are less certain than those of larger, more established companies, and they can be volatile.

2. Sources: World Bank, World Intellectual Property Organization (WIPO), WIPO Patent Report: Statistics on Worldwide Patent Activity as of January 2019. The International Bureau of WIPO assumes no responsibility with respect to the transformation of these data.