As European Central Bank (ECB) policymakers adjust the budget to reflect lighter eurozone economic activity, moderate economic growth and the United Kingdom’s departure from the European Union (EU), David Zahn, our Head of European Fixed Income, shares his macroeconomic outlook for the region. He weighs in on why the ECB could remain accommodative. 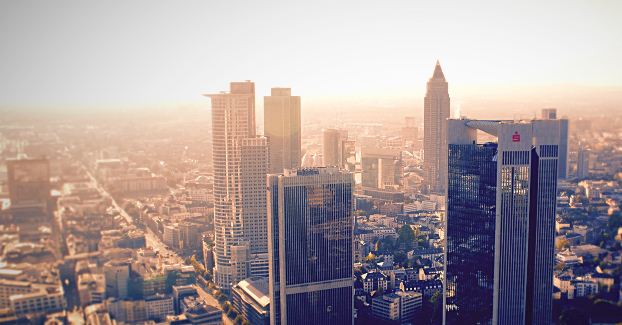 It’s no surprise we’ve seen some challenges to global economic growth arise, first with lower export growth in 2019 and this year, the coronavirus outbreak that originated out of China. We think the virus will likely be a one-time knock to eurozone gross domestic product (GDP) growth for the first half of 2020; then, we’d expect growth to likely recover back to current levels later in the year.

Many countries in the eurozone composite purchasing managers’ index (PMIs), a much-watched indicator of economic activity, are in contractionary territory—Germany is the main culprit as the largest exporter out of Europe with a large exposure to the slight slowdown in Asia. However, we believe most of the contraction is likely behind us, and would expect domestic demand for the rest of 2020 and beginning of 2021 to support moderate eurozone growth of around 1%. 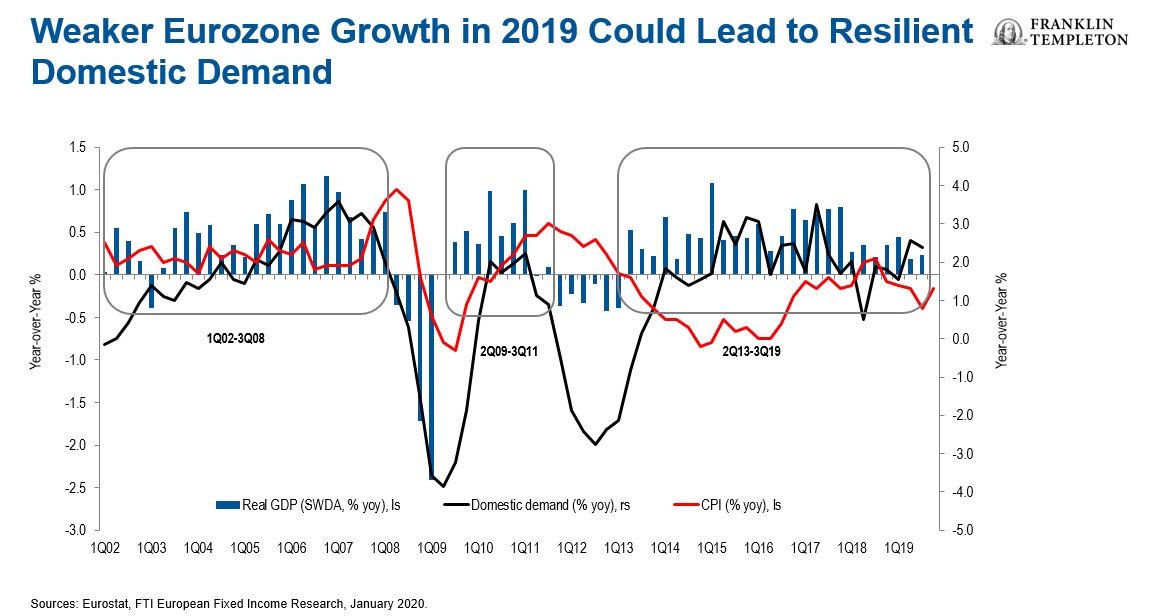 It’s important to remember the European Central Bank (ECB) remains incredibly accommodative in its policy decisions. At the same time, countries such as France have gone through robust reforms, ranging from business investments, changes to employment laws and corporate tax cuts. Germany and the Netherlands have room to ease budgets, but we don’t expect much adjustment.

Over the years, the ECB has carried out a huge amount of quantitative easing (QE) through a renewed program. We think the ECB will want to stay focused on QE for the foreseeable future in a bid to boost inflation.

The latest eurozone inflation figure for January was reported at 1.4%,2 well below the ECB’s longstanding target inflation rate of 2%. So, right now, we have below-target growth, without much inflation either. In the interim, at least for the rest of 2020, we think the ECB should stay on a steady path to remain accommodative. That said, in our view, a combination of moderate fiscal expansion and relatively dovish ECB policy should prove insufficient to raise inflation expectations meaningfully in 2020.

We think one of the favorable aspects of ECB policy under current President Christine Lagarde is how she might lead the central bank with more of an open mind than a classically trained economist. Just like her counterpart, US Federal Reserve Chairman Jerome Powell—the first chair not to hold a Ph.D. in economics—Lagarde is a lawyer and seasoned politician, and most likely won’t be influenced by any particular economic theory. In our view, that could pave the way for the ECB to consider buying other assets besides corporate and government bonds. 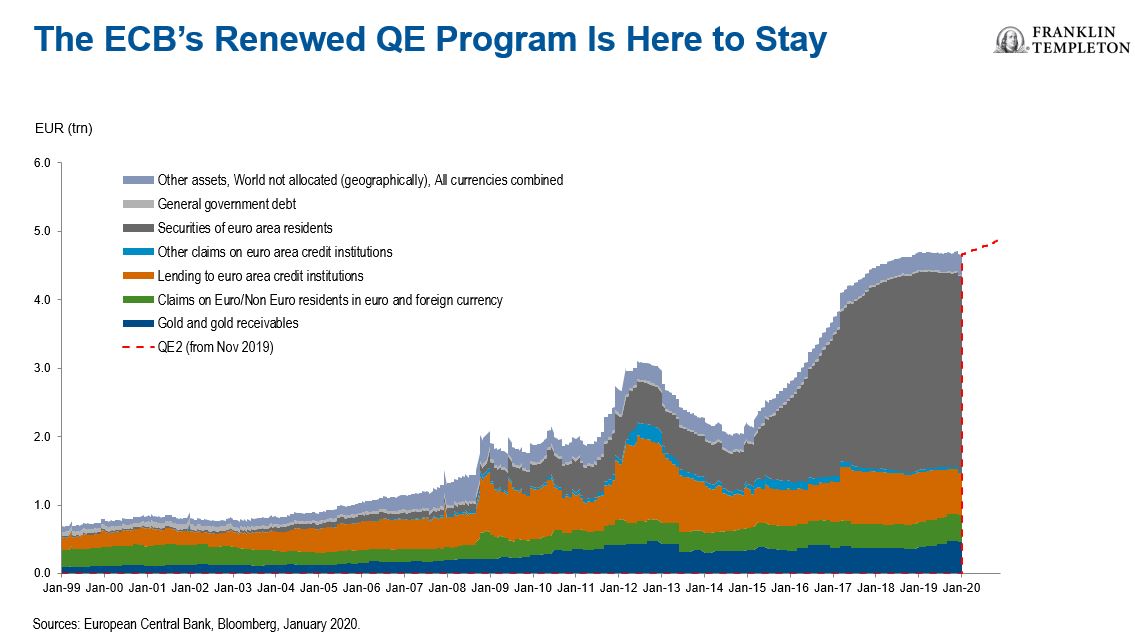 What’s Next for the European Bond Market?

Looking ahead, we think the biggest headwind to the European bond market is the upcoming US presidential election. Bernie Sanders is leading the primary race on the Democratic side, and he has put forth pricey spending plans for various social programs, from free college tuition to universal child care, that are estimated to cost around US$50 trillion over the next decade.2 Should he win and some of his initiatives pass, we would expect to see more US Treasuries issued pushing up Treasury yields. This would probably flow into the European fixed income markets as well and push up European yields.

The United Kingdom is another country where we may see significant amounts of spending. In a surprise move, Sajid Javid resigned as UK Chancellor of the Exchequer a few weeks before the UK budget announcement on 11 March. Rishi Sunak was promoted to the role.

We believe the new chancellor will be keen to not just spend, but invest in infrastructure, skills and technology to increase productive output. While this would be undoubtedly helpful for the United Kingdom in the longer term, we acknowledge we may see a rise in gilt yields due to an increased supply.

In general, our macroeconomic outlook for Europe in 2020 is mostly subdued. We think the ECB will likely stay largely accommodative amid some external forces and political uncertainty coming from the rest of the world. While the beginning of the year was eventful and there are still some unknowns related to the impact of the coronavirus at this time, we still expect the European economy to grow at a modest pace.

The views expressed are those of the investment manager and the comments, opinions and analyses are rendered as of publication date (or specific date in some cases) and may change without notice. The information provided in this material is not intended as a complete analysis of every material fact regarding any country, region or market.

Products, services and information may not be available in all jurisdictions and are offered outside the U.S. by other FT affiliates and/or their distributors as local laws and regulation permits. Please consult your own professional adviser or Franklin Templeton institutional contact for further information on availability of products and services in your jurisdiction.

2. Source: Washington Post, Here’s how much a Bernie Sanders presidency would cost, February 27, 2020.