As headlines revolve around the impact of the coronavirus and the costs of government spending packages to keep the economy afloat, the state of Social Security is one thing we can find at least some assurance in, says Gail Buckner, our personal retirement and financial planning strategist. She takes a look at the latest Social Security Trustees’ Report, released on April 22. 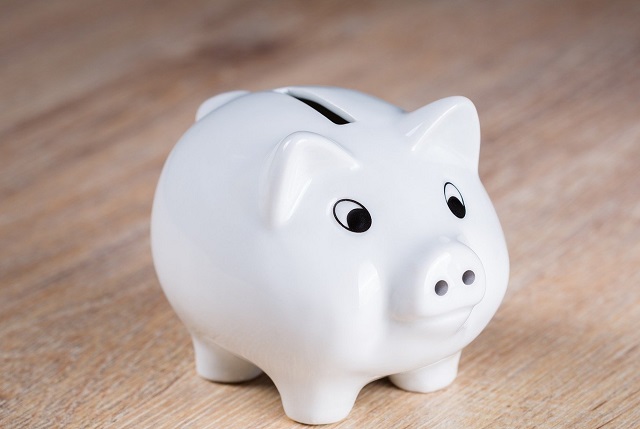 If you’re like most other Americans, you have a retirement plan that is not affected by what happens on Wall Street/in the financial markets.

Social Security was one of several federal programs created in response to the Great Depression, which started in 1929 and lasted a decade. By 1933 the nation’s unemployment rate had hit 25%. One out of four working Americans had lost their job. There were literally Americans dying on the streets of our cities because they could not afford food or a place to sleep. Many of them were our most vulnerable citizens—the elderly.

That year, under newly elected President Franklin Roosevelt, Congress passed the first “New Deal,” a package of short-term economic programs which, among other things, included work assistance programs and financial aid. It also put an end to the gold standard and introduced prohibition. Two years later, a second wave of New Deal legislation was signed into law creating the Securities and Exchange Commission (SEC), the Federal Housing Administration (FHA), the Social Security Administration and other programs. Despite this, in 1937 the economy collapsed into recession.

It was not federal programs or federal aid, but war that brought the United States out of the dark days of the 1930s. When President Roosevelt decided America would help Western Europe fight back Hitler’s Germany, millions of able-bodied men were suddenly employed—by the US military. By 1943, America’s unemployment rate was down to 2%.

What Is Social Security?

For instance, if a worker becomes disabled and is unable to work, she/he can receive a benefit at any age. So can family members such as spouses, minor children and dependent parents. When you die, close family members who survive you—such as your spouse and children—receive a benefit. Importantly, unlike the pensions so many people remember from the “good ol’ days,” you don’t lose your Social Security if you change jobs; your account is tied to your work history, not a particular employer.

In December of 2019, Social Security paid out more than $88 million (monthly rate) to over 64 million people. Here’s a breakdown: 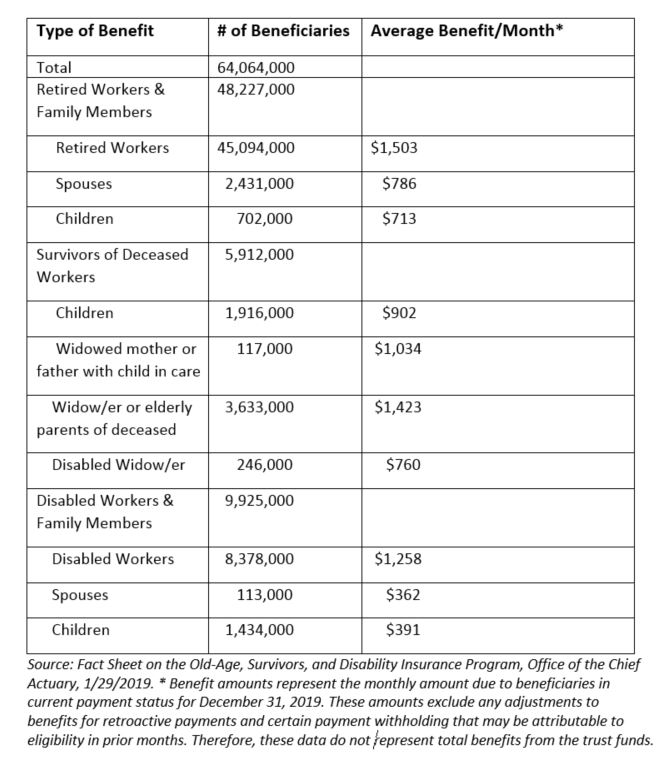 Show Me the Money

Both you and your employer contribute to your Social Security account. Each pay period, 6.2% comes out of your paycheck—half the Social Security tax rate of 12.4%.1 Your employer adds another 6.2% and sends the total to the US Treasury, which credits the two Social Security “trust funds.” (One fund pays “retirement” benefits, the other pays “disability” benefits.) At the end of last year, these two funds held a combined $2.895 trillion.

Contrary to pervasive rumors, the government cannot “borrow” money from either of the Social Security trust funds. This misconception probably arises from the fact that Congress mandated that excess cash in the trust funds had to be: 1) invested so that it earned a profit, and 2) invested in absolutely safe securities. Thus, excess cash is invested in special US Treasury bonds that are only issued to the two trust funds and which pay a market rate of interest. In fact, the interest paid by the federal government on these bonds is a significant contributor to Social Security’s financial health, amounting to nearly $81 billion in 2019!2

Let’s look at the facts.

Overall, the federal government’s budget is more than $4 trillion a year. The biggest portion of that goes to Social Security beneficiaries.

In addition, the administrative cost of running the Social Security is also borne by those who benefit. A portion of the payroll tax that American workers and their employers pay covers the expense of running the Social Security Department, which is one of the leanest in the federal government. Administering the program represents roughly one percent of its total annual cost.

By law, every year the Social Security trustees have to report on the 75-year outlook for the program’s finances. The latest report came out on April 22, 2020. (It does not take into account the high unemployment rate caused by the COVID-19 pandemic, because it is too early to accurately compute this.)

Here are a few of the things that Social Security experts are expected to predict—for each of the next 75 years (!)—in order to create this report:

As Yogi Berra once said, “It’s hard to make predictions. Especially about the future!”

The full report runs more than 100 pages. The chart below sums up the part most Americans are interested in: 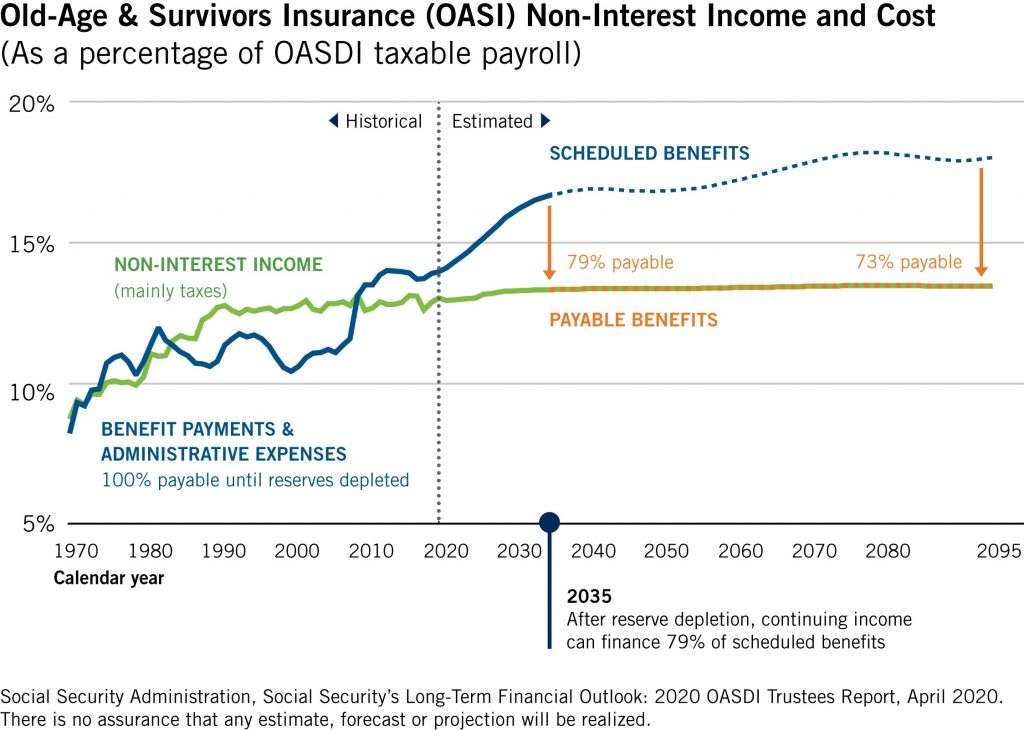 Translation: The green line shows past and projected income in the form of payroll tax paid by workers and their employers. The blue line represents the cost of running the Social Security program, which includes benefits already paid or owed 75 years in the future.

The dotted blue line indicates that by 2035 Social Security will only be able to pay 79% of the benefits it will owe. The main reason is demographic: since around 2000 there has been a substantial increase in the number of individuals retiring. Many Baby Boomers did not have large families, so there aren’t as many workers coming up behind them and contributing to the program.

We’ll be fine for the next 15 years because the excess money in the trust funds can make up the difference. But that’s projected to be used up by 2035. At that point, unless something is done, the only source of money Social Security will have is the payroll tax paid by current workers and their employers. That will only be sufficient to cover 79% of the benefits that will be owed.

The current Social Security tax rate is 12.4%. Employees and employers each pay half of that: 6.2%. According to this year’s Trustees report, if each party paid a little more: about one and a half cents more for every dollar you earn or $16 per $1,000 you make (up to this year’s maximum of $137,700), everyone would receive the benefit they’ve earned for the next 75 years.

The longer we delay, the bigger the fix.

Learn more about developing a strategy to fund your own retirement: www.franklintempleton.com/whatsnext.

All financial decisions and investments involve risk, including possible loss of principal.

The information (including tools) contained herein is general and educational in nature and should not be considered or relied upon as legal, tax, or investment advice or recommendations, or as a substitute for legal or tax counsel. It is not intended to serve as the primary basis for your investment, tax or retirement planning purposes, and should not be used as the final determinant on how and when to claim Social Security benefits, which can be a complex and personal decision. Franklin Templeton (FT) is not responsible for content on the Social Security Administration’s website. Federal and state laws and regulations are complex and subject to change, which can materially impact your results. FT cannot guarantee that such information is accurate, complete or timely; and disclaims any liability arising out of your use of, or any tax position taken in reliance on, such information. Always consult your own independent financial professional, attorney or tax advisor for advice regarding your specific goals and individual situation.

Certified Financial Planner Board of Standards Inc. owns the certification marks CFP®, CERTIFIED FINANCIAL PLANNER™, CFP® (with plaque design) and CFP® (with flame design) in the US, which it awards to individuals who successfully complete CFP Board’s initial and ongoing certification requirements.

1. Beginning in 1966, Congress authorized an additional Medicare hospital insurance (HI) tax. Today, employers and employees each contribute 1.45%. An additional Medicare tax is paid by individuals with income earned income above $200,000 or above $250,000, if married.