Given fears of a COVID-19 resurgence and US election uncertainties looming, many investors are wondering what comes next for policymakers in terms of supporting the economy. Our Fixed Income CIO Sonal Desai weighs in on the possibility of negative US interest rates or other measures.

As policymakers venture further and further into uncharted territory, markets have to ponder what the US Federal Reserve’s (Fed’s) next frontier will be. Investors first focused on the possibility of negative interest rates, then they realized that yield curve control (YCC) was a more likely alternative—and indeed at the press conference following the Federal Reserve’s June policy meeting, Chairman Jerome Powell confirmed they had discussed the option.

Do We Actually Need More Easing?

After this week’s strong rebound in May US retail sales—and the surprise 2.5 million recovery in May non-farm payrolls—the Fed may want to take more time to monitor the situation. Some real-time indicators suggest a healthy rebound might already be underway (as I discussed in my previous On My Mind). But the outlook remains highly uncertain, given fears of a second wave of COVID-19 contagion and the November elections.

The Fed also needs to assess the impact of the policy stimulus already underway: The Fed’s own actions so far appear to have been effective in boosting credit and stabilizing financial markets—and the Fed has so far deployed only a fraction of its committed asset-purchasing firepower. Moreover, an additional round of fiscal stimulus is under discussion.

I think the Fed will wait till after the summer and will lean towards YCC if more stimulus seems warranted—I see negative rates as very unlikely. Will the Fed have to step in again? In my view, probably yes. Even if we do continue to experience a V-shaped rebound in the next couple of months, the recovery will then likely slow and it will take a while for the US economy to get back onto the pre-COVID-19 path (see our recent  white paper, “US Macro Outlook: Let’s Bend the Economic Growth Curve.”) Moreover, equity markets appear to be already priced for perfection, which means that pre-election volatility could set the stage for an adjustment in stock prices, bringing the usual market pressure to bear on the Fed to step in.

For now, however, we should keep monitoring how the recovery unfolds—the early signs are that the country is eager to get back to work—and to shopping. Let’s hope that continues. Meanwhile, let’s take a look at how YCC and negative rates would work and how they would impact the market.

YCC can be seen as an extreme form of forward guidance and a natural extension of quantitative easing (QE). The Fed would cap at specific levels the yields on Treasury securities at specified maturities, guaranteeing that yields will remain low for an extended period. To achieve this, it would commit to buying unlimited amounts of bonds at the specified prices—whereas in traditional QE the Fed often commits to buying specific amounts of securities. This would push private demand towards riskier investments, across a wide range of assets, including equities and lower-rated corporate bonds.

The Fed has already used YCC in the past—back in 1942, it capped yields on both short-term and long-term Treasury securities to lower the cost of financing the war effort.

YCC would have five potential advantages: 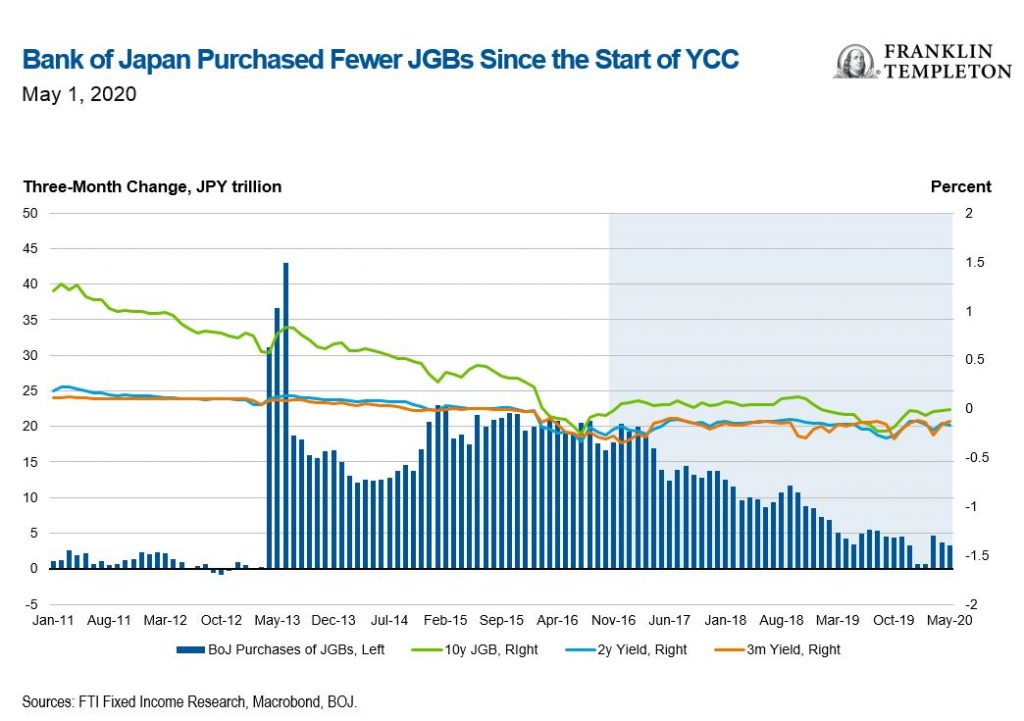 There is no free lunch, however (not even in these days of unprecedented stimulus) and YCC would entail some troubling complications and risks:

The YCC experience of the 1940s flags another risk: If under cover of YCC the government gets used to running very large deficits backstopped by the central bank, it might be reluctant to see that privilege evaporate. And there is little doubt that both political parties now show a robust appetite for much greater government spending. 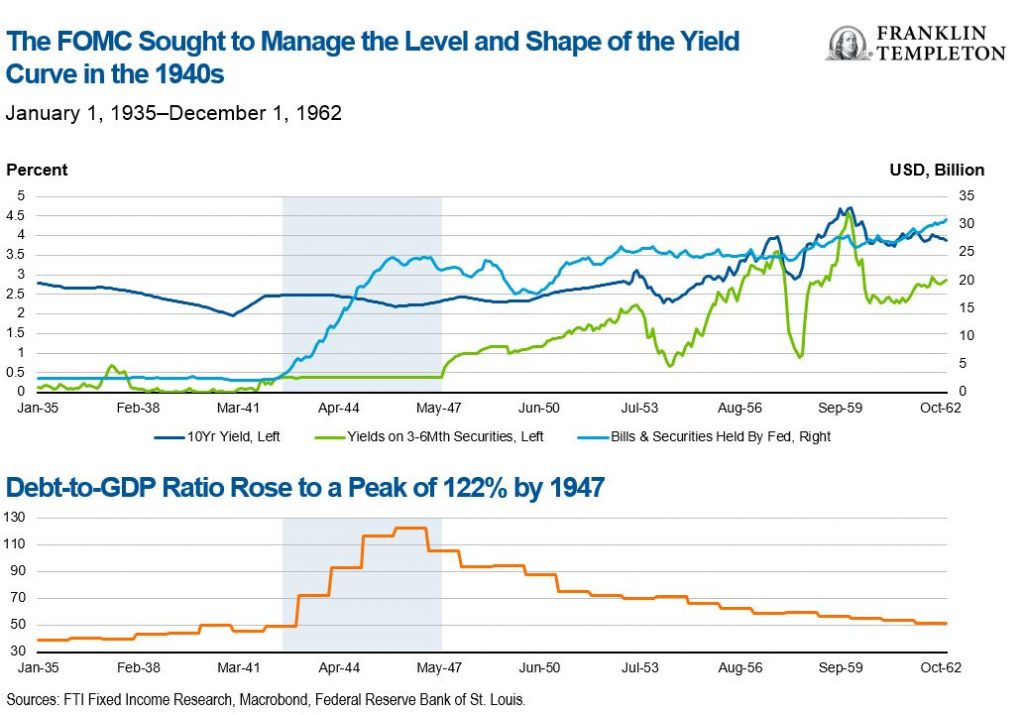 A Negative Vote to Negative Rates

Since YCC carries some significant risks, why has the Fed so far been consistently reluctant to consider negative interest rates?

After all, several advanced economies have already experimented with negative rates during the past five years: The euro area, Japan, Sweden, Denmark and Switzerland—while the Fed engaged in a 2.25 percentage point rate-hiking cycle between December 2015 and December 2019. How did things play out? 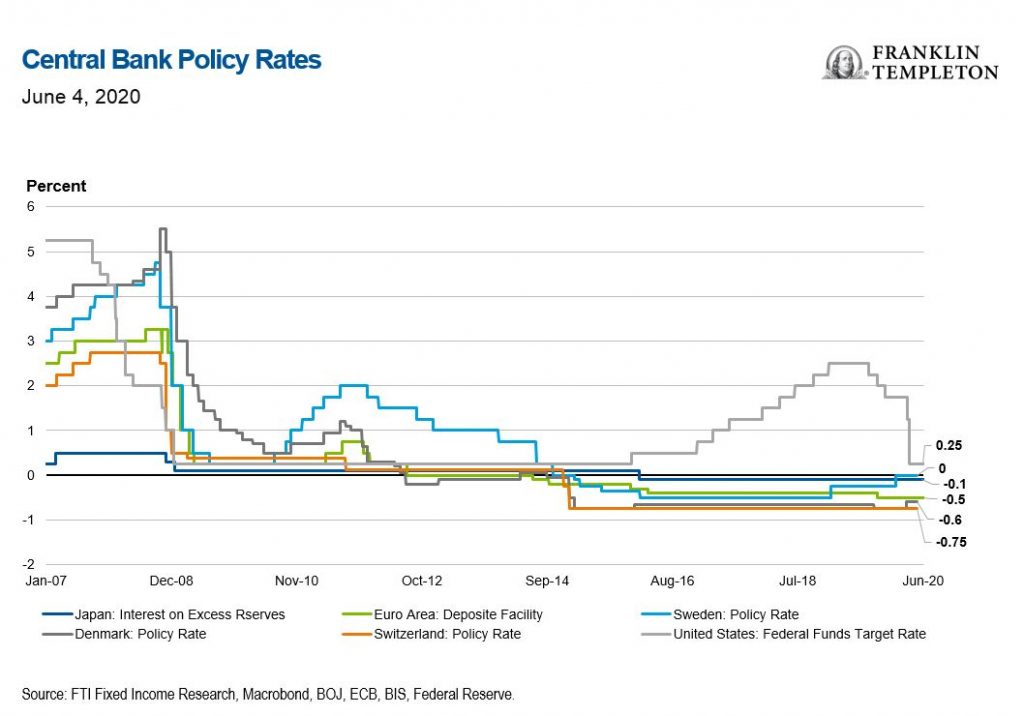 Over the five years, US personal consumption expenditures grew faster than all five “negative-raters,” at 14%, followed by Denmark and Sweden; US investment grew a bit more slowly than the euro area and Denmark, but on a par with Sweden and a lot faster than Japan. 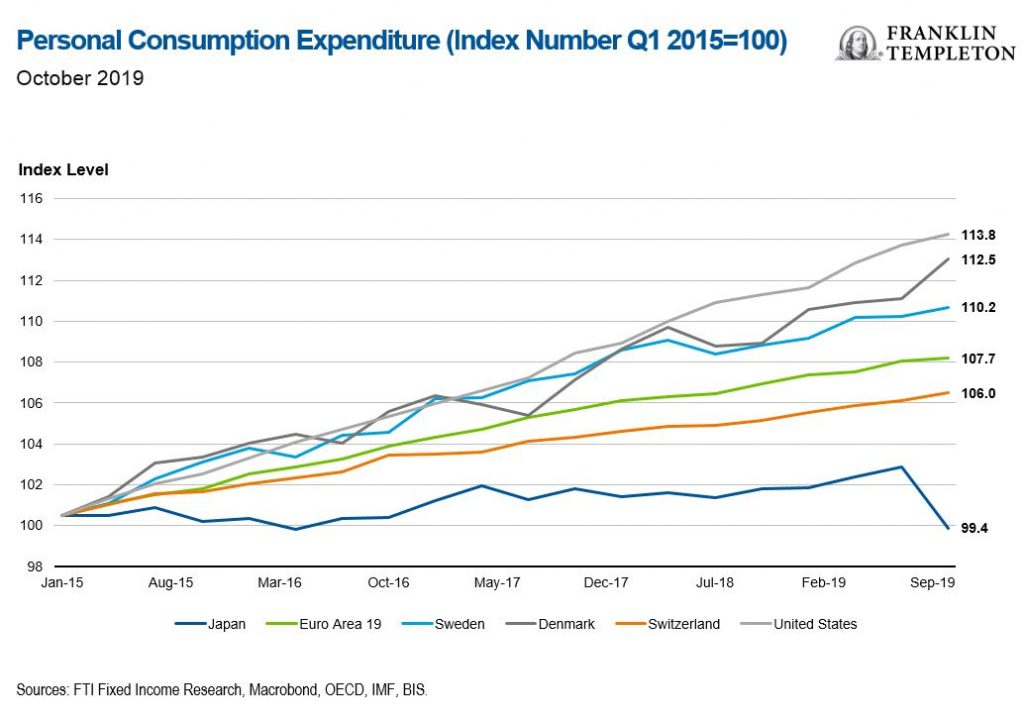 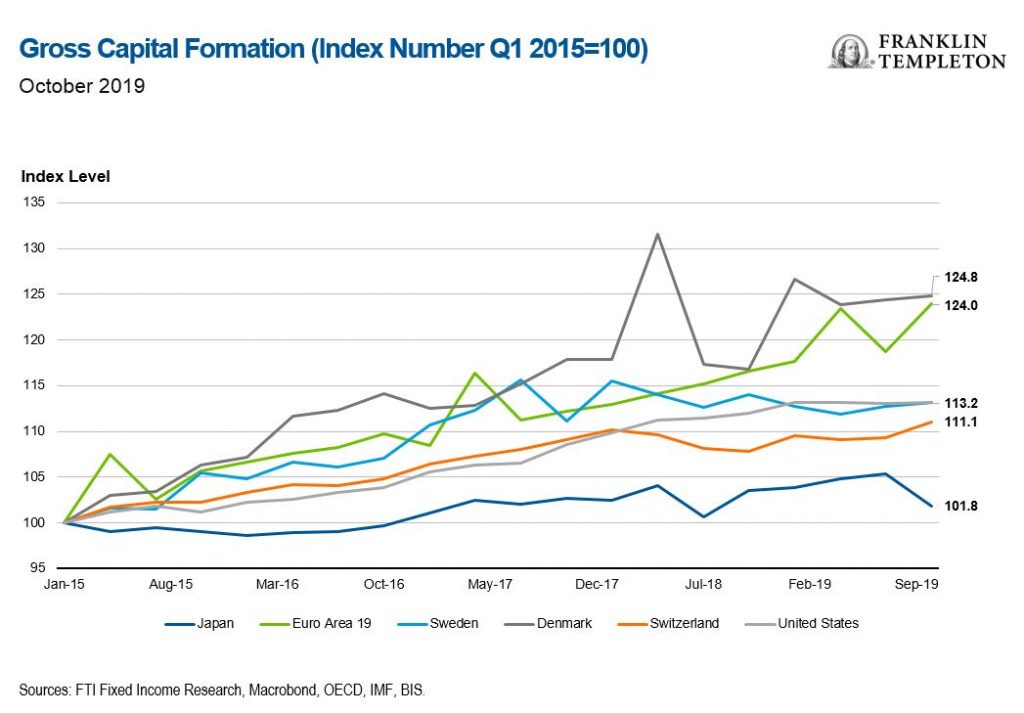 Consumer prices also increased at a brisker pace in the United States: 10% over the five-year period compared to 8% in Sweden and only 6% in the euro area.

For Sweden and Switzerland, negative rates helped make the exchange rate more competitive—for Switzerland countering the appreciating pressure on the Swiss franc (due to its safe-haven status) was an important policy goal. Since their exports account for close to half of gross domestic product (GDP), a more competitive exchange rate can give an important boost to growth—and the same holds for Denmark and the euro area. US exports are only 12% of GDP, however, so the exchange rate channel would be less powerful. 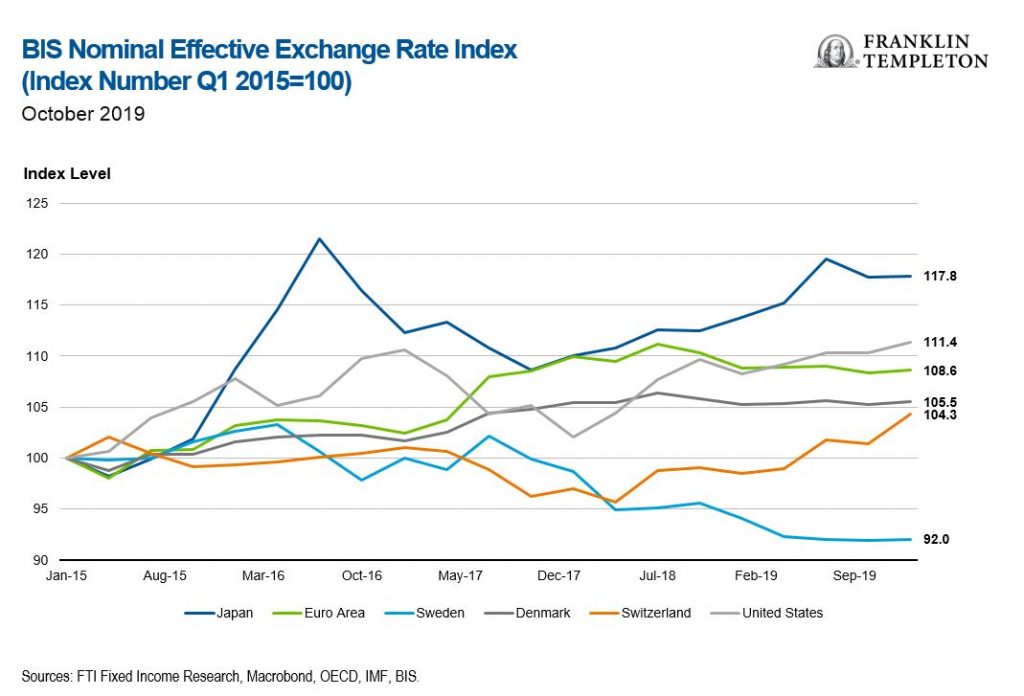 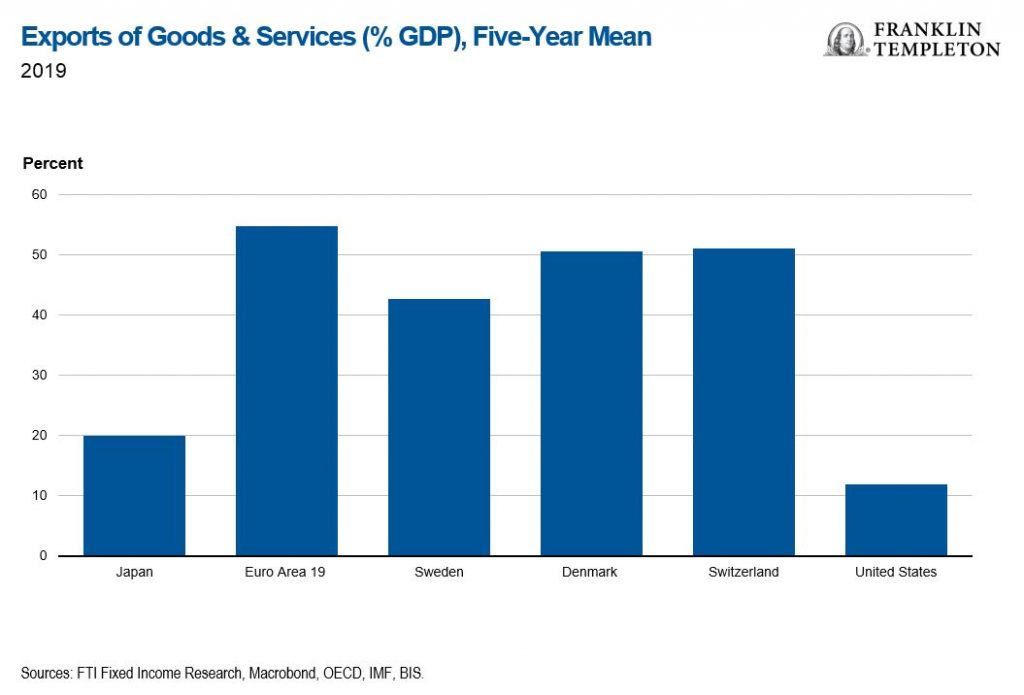 At first cut therefore, negative rates don’t seem to have given these five countries a leg up compared to the United States. Of course, there were other important differences between the United States and the five “negative-raters,” and it’s quite possible that Japan, Sweden, Switzerland, Denmark and the euro area would have suffered a weaker performance had their central banks not pushed rates below zero. But negative rates have certainly not provided a decisive boost.

You might have noticed in the first chart that none of these countries pushed rates much below zero; Switzerland made the boldest move to -0.75%. Why did they not cut even more? After all, the rationale for negative rates is that if the economy needs substantial rate cuts, but nominal interest rates are already low, the zero-bound should not be a barrier—policymakers should cut by as much as they see fit.

Well, the problem is that negative rates can play havoc with the financial sector:

All this with interest rates around -0.50%. Now consider that for the United States today, some estimates of the classic Taylor Rule2 suggest the appropriate level of interest rates would be -16%!

No wonder the Fed is reluctant to go down that route, especially as the robust health of the financial system is one of the most important elements of resilience in an otherwise fragile economic environment.

Moreover, cutting interest rates beyond a certain point can backfire on aggregate demand—with very low interest rates, households get a minimal yield on their savings. With high uncertainty and doubts on the solvency of private and public pension systems, households can easily decide to save more and consume less.

So now look at the next two charts: between 1980 and 2000, a decline in US long-term interest rates went hand in hand with lower savings and higher consumption; over the past two decades, however, that relationship has reversed, with the savings rate rising as yields on 10-year Treasuries declined to record lows. Correlation is not causation, and the chart is not proof that lower interest rates cause people to save more. However, it does caution against hoping that negative rates would boost consumption.

Weighing the risks to the financial sector and the limited evidence of economic benefits, it’s not surprising that negative rates have not sparked the Fed’s enthusiasm. Never say never though, so it’s worth keeping this analysis in mind for the future. 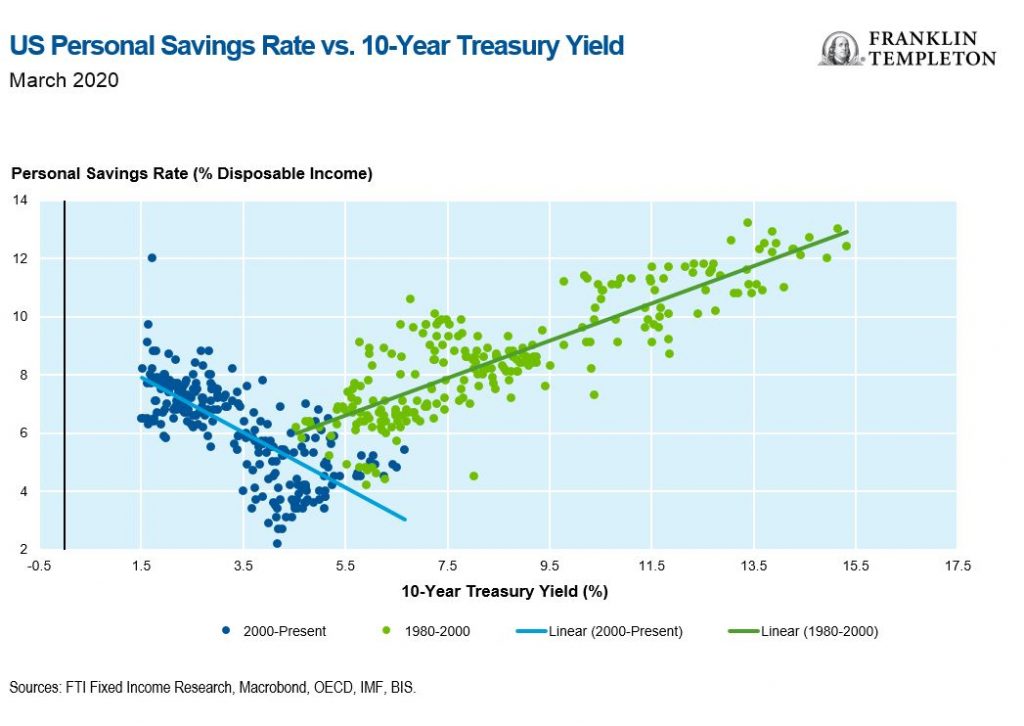 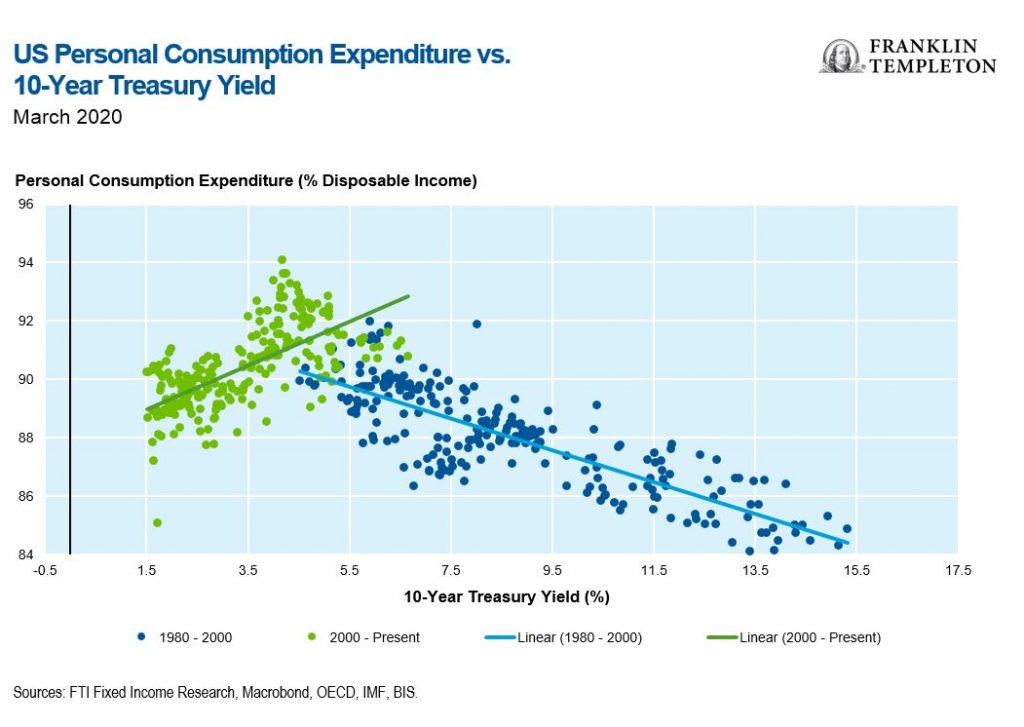 The views expressed are those of the investment manager and the comments, opinions and analyses are rendered as of publication date and may change without notice. The information provided in this material is not intended as a complete analysis of every material fact regarding any country, region or market.

Products, services and information may not be available in all jurisdictions and are offered outside the U.S. by other FT affiliates and/or their distributors as local laws and regulation permits. Please consult your own professional adviser or Franklin Templeton institutional contact for further information on availability of products and services in your jurisdiction.

All investments involve risks, including possible loss of principal. Bond prices generally move in the opposite direction of interest rates. Thus, as prices of bonds in an investment portfolio adjust to a rise in interest rates, the value of the portfolio may decline. Actively managed strategies could experience losses if the investment manager’s judgment about markets, interest rates or the attractiveness, relative values, liquidity or potential appreciation of particular investments made for a portfolio, proves to be incorrect. There can be no guarantee that an investment manager’s investment techniques or decisions will produce the desired results.

2. Proposed by Economist John Taylor, Taylor’s rule outlines how central banks might alter interest rates in response to changes in economic conditions to stabilize an economy in the short term while still maintaining long-term growth.